The Saga of the Bees Continues - Bees, You Win

Let me preface this by saying that I wasn't actually attacked by bees today.  I was just really really really scared of the possibility of being attacked by them.  My horrifying experiences with Giant Killer Bees attacking me are already well-documented here and here.

I'm pretty sure these guys are on the bees' side.

Today I was due for another hair-washing shower.  Now, before I go any further, if you just thought something judgey like "isn't every shower a hair washing shower?  GROSS!" then you should know that I have very curly hair and it is scientifically proven that curly hair should not be washed every day otherwise it gets all frizzy, which we all know is the worst thing that can ever happen.  Ever.  So there.

Okay, so anyways, I was due to wash my hair and I have used my university-educated powers of intelligence to figure out that I have only been attacked while washing my hair.  Which indicates that, potentially, the Giant Killer Bees are attracted to the scent of my shampoo or to the thought of molesting my shiny and clean hair.  Whatever their disgusting Giant Killer Bee reasoning is, they go after me when shampoo is present.  So I took defensive action.

I have also used my university-educated powers of reasoning to deduce that there are two possible entry-points for the bees.  One is through the air vent, the other is through the Evil Closet of Darkness.  The Evil Closet of Darkness is in one hand, very awesome because it is the ONLY storage space in my entire home.  It is also very large and long and has a hot water heater in it and then a big open space behind the hot water heater that I cannot see.  This is where the evil lives.  Here, I drew you a diagram: 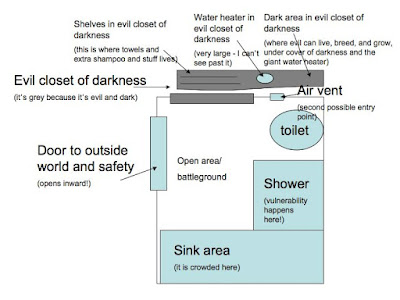 I stuffed towels and my housecoat into the cracks above and below the door to the Evil Closet of Darkness, and closed the air vent.  Now watch those bees try to get me!

Technically my plan was successful: I was not attacked.  Unfortunately, the sad truth is that now I will have to stuff towels and housecoats into the cracks of the closet doors every single time I shower.  Or I will have to move.  This is why the bees, like the terrorists, have won.  They have permanently altered my way of life.  They have introduced a constant fear and forced me into unreasonable defensive actions.  Sort of like how I have to buy tiny tubes of toothpaste now if I want to fly and not check my luggage even though I could probably still make a bomb out of that little, bitty amount of toothpaste if I really wanted to (and if I knew how to make toothpaste bombs), or I could just think of a different way to sneak bad things onto planes, because I'm pretty sure a creative mind could think of a thousand ways to sneak bad things onto planes if they really wanted to.  That's what creative minds do.

Note to any kind of authority figure reading this: I will never try to sneak bad things onto planes!  Please don't put me on a no-fly list!  I was only trying to make a point that bees and terrorists are similar in the way they have inconvenienced my life!
at May 05, 2010
Email ThisBlogThis!Share to TwitterShare to FacebookShare to Pinterest
Labels: hilarious!, Whimsy