How to Make Vanilla Cupcakes Awesome

Okay, I've figured it out!  I wrote earlier today about how google failed me in figuring out how to make vanilla cupcakes awesome.  This is what I came up with.

First, I used Amy Sedaris' allegedly award-winning recipe for vanilla cupcakes.  I think I may have actually tried these cupcakes the first time I was in New York, but I can't be 100% sure.  If these were the cupcakes I tried, they were EFFING DELICIOUS.  Needless to say, I followed the rules of the recipe.  After the cupcakes were baked, I filled them with caramel sauce I bought for $2.50 at Shoppers.  Then I made icing (from scratch, yo!  It's not as hard as you might think) and tried to pipe it in a nice-looking way on top of the cupcakes, but since I don't actually own any proper icing-piping paraphernalia, I had to use the snipped-ziplock bag method.  It works, it just doesn't look as fancy.  On my way to the party tomorrow I shall stop at the dollar store en route and pick up some little toys to use as decorations.  Because the best way to celebrate getting older is to pretend you are a child again. 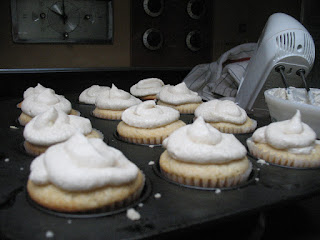 I know they don't necessarily look super-awesome, but you need to imagine two things.  The first being adorable and hilarious tiny toys atop those beautiful mounds of icing.  The second, is the delightful surprise that will come when people find the caramel surprise inside!  AWESOME.

Besides, I told Birthday Girl that I could 98% guarantee the cupcakes would taste delicious, but only 50% guarantee they would look good.

I just remembered that I have sprinkles.  I will consider using them to add some more sugary festivity to these little cup-sized cakes.
at May 02, 2010
Email ThisBlogThis!Share to TwitterShare to FacebookShare to Pinterest
Labels: diy