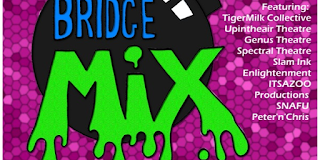 The shows that worked the best were by far the ones that didn't try to get too deep or "artistic" in their storytelling.  The ones that just used the fact that they were in a parkade, created a situation, and went with it.  Itsazoo started off the night with a hilarious piece where a douchebag gets turned into some kind of evil clown/zombie lackey.  Genus Theatre also rocked the boat with their street hockey setup - a show that was literally a game of street hockey involving audience members.

I didn't have a program, so I don't know which company did the ongoing date/awkward run-in bit, but theirs was pretty great too.  Acting was a little on the shaky side at times, but I loved the concept of just having little snippets of scenes pop up throughout the night.

There was also a sword fight, and plenty o' song and dance numbers, which always make my heart a-flutter.

Thank you, theatre.  Thank you for existing.
at May 16, 2010
Email ThisBlogThis!Share to TwitterShare to FacebookShare to Pinterest
Labels: Issues & Ideas, newsy, theatre