The Kleenex company, pioneers in convincing everyone that reusable handkerchiefs are disgusting*, have found a new frontier their war on trees!  Now they want everyone to believe that a hand towel in your home bathroom is disgusting.  Yep, continue to use that cloth hand towel and you'll be a spawning ground for disease and disability.  Your family will probably get the plague.  In fact, your home will likely be the source of the next big animal-sourced flu: feline, canine, or parrotine.

The sad thing is that people will actually buy these.  You know, to go along with their air-disinfectants, one-time use antibacterial wipes for ever room in the house, and individually wrapped baby wipes for ladies.

*I will concede that handkerchiefs can be disgusting.  I do think that for everyday sniffles and other mucous-lite activities they are a great idea though and that they should be making a comeback.  I mean, come on! You can get them monogrammed!  Think of the possibilities: you could drop a hanky to invite the seduction of an attractive stranger!  You can find a hanky to uncover infidelity!  The possibilities are endless!  Or at least dual.
at October 23, 2010 No comments:
Email ThisBlogThis!Share to TwitterShare to FacebookShare to Pinterest

Read this.  You will learn how to pet a kitty, and incredibly valuable skill for any person to have, but more importantly (and probably horribly anti-feminist of me to say), you will learn something about taking care of a special lady-friend.  I'm not saying it all applies, I'm just saying that when snuggle time is available, you take that snuggle time.  And when the belly (or perhaps more accurately, chesticles) are exposed, you take advantage of the moment and frolic in the backhair of the angel that is a lady's bosom.  Cut snuggle time short before you lady is ready and be ready to be night-snuggled in your sleep, taking over more and more of the bed throughout the night.
at October 22, 2010 No comments:
Email ThisBlogThis!Share to TwitterShare to FacebookShare to Pinterest

Vampires - they can't be reasoned with

It's no secret that I LOVE vampires.  I always have.  Okay, not always, but ever since my friend sat me down and MADE me watch Buffy about a year and a half before they became all trendy.  (Yes, I will insist until the day I die and/or am turned into a vampire that I liked them PRE-TRENDINESS!)  I even love, in a totally dripping in hipster-style irony way, the Twilight series.  Even more so, I love this Tumblr, where someone has picked apart the terrible writing and seriously abusive nature of the Bella/Edward relationship, through awesome images like this one:

Find more: http://reasoningwithvampires.tumblr.com/
at October 20, 2010 No comments:
Email ThisBlogThis!Share to TwitterShare to FacebookShare to Pinterest

The Sanctity of Marriage - SAVED

Because for some reason the debate is still raging on gay marriage, I decided to write my own little diatribe on the issue.  While I know it won't be nearly as hilarious as a Jack Black Jesus, in true blogging style, it's just something I've got to say, regardless of whether it's been said a million times before.

Here's the deal: even in happy-slappy Canada where gay marriage is begrudgingly legal, people say that it destroys the sanctity of marriage and then leap into slippery-slope arguments that soon uncles will be marrying their 8 year old nephews into polygamist families*.

Downward-spiral-to-horrible-incestuous-polygamist-death aside, it seems that the crux of the issue is the sanctity of marriage.  In case you didn't know, marriage is a holy, special, God-invented thing (I think he came up with it on the 4th day) that, until the recent advent of gay marriage has remained unchanging, steadfast, and true.  A perfect picture off Mommy, Daddy, and their two kids that remain a happy family unit forever and continue the population of the planet.

Now the threat to this image is not gay people.  Believe it or not, there is a group of people that violates this perfect image even more than gay people: celebrities.

Musicians!  Actors!  Directors!  Singers!  Models!  TV Personalities Who Don't Actually Have Any Talent Except for Having Really Big Hair and Tiny Disproportionate Bodies!  These people are destroying the sanctity of marriage and the family all over the place.  Marriages!  Divorces!  Remarriages!  Cheating!  Marrying someone else again!  Carting children from one family unit to the next!  Unwed parenthood!  Reality TV shows that document the whole thing!  The longest lasting relationships most of these ladies have are not with their baby daddies, but with their baby nannies.

You may doubt what I'm saying, but the fact is that it's all documented in the mainstream press.  The way I see it, there is nary a sanctimoniously married family in the bunch.  Well, maybe one or two, but heck, do we really want to risk the precious institution of marriage on this lot for one or two good marriages?  I mean, just because there's a few good seeds spattered around doesn't make the poo fertilizer.  Besides, the ones that might qualify are probably Scientologists, so we know that their marriages aren't even real anyways.

So before we start freaking out about letting gay people marry, perhaps we should clean up the stinking cesspool that is heterosexual marriage, shouldn't we?  First, as I've already pointed out, we'll outlaw celebrity marriage.  Then, naturally, we have to tighten up and start following all those rules about marriage, so remarriage after divorce is forbidden.  You married someone who turned out to be an abuser?  Tough love, sister!  Stay with him or stay single.  Next we bring back stoning for women who cheat, and what the heck, it's the 21st century, let's stone the men too!  Now, Jesus said that anyone who looked upon another person with lust in their heart had already committed adultery, so that means they're breaking their marriage contract and we have to stone them too.  Or at least ban them from future marriage if they don't force themselves to stay with their unsatisfactory spouse.  Okay, finally we round up all the people who de-sanctify marriage in other ways: using porn, open relationships, sodomy (which technically is any sex that's not missionary position), or refusing to have children all together, and make sure they either don't get married or get stoned.  Oh, and it seems to fit within this definition that anyone who doesn't get married by a Christian pastor or priest probably is destroying the sanctity of marriage, since we seem to be basing this entirely on a misinterpretation of the Biblical notion of marriage and it didn't include other religions.

Now all that's left are straight Christians who are either actually happily married with one another and want to have children, or are simmering in regret and emptiness while insisting on fulfilling their marital duties.  Marriage has remained sanctified!  HOORAY!

*Okay, first of all, that ain't gonna happen because incest is one of the few universal taboos that provokes a disgust reaction in literally every culture.  Secondly, we have lots of very strict legitimate laws protecting younguns from sexual exploitation and technically we did a reverse slippery slope on that one because it used to be considered a-okay to force children to marry adults.  Third and finally, the only real reason to oppose polygamy is the ongoing victimization and oppression of women in this lifestyle (and, if you've seen the TLC reality show Sister Wives, you'll likely also be kind of skeezed out by the whole idea that the man is clearly just playing at being king of the castle with all these women who need him sooooo much).
at October 19, 2010 No comments:
Email ThisBlogThis!Share to TwitterShare to FacebookShare to Pinterest

Halloween is a BIG Decision

I'm having trouble deciding what I want to be for Halloween.  It's my favourite holiday of the year and I always feel the need to think of something awesome.  I prefer being a character from something I'm obsessed with or a slightly under-appreciated, obscure cultural source.  Or something kind of abstract.  Past favourite costumes have been Mother Nature and Wanda (as in Where's Wanda, as in the girl in Where's Waldo, as in Waldo's girlfriend*).  I also need to think of what Buffy-related costume I'm going to wear for the Buffy Musical Sing-Along, but at least I've got the field narrowed down with that one.

So far my ideas are:

Also, maybe a tornado?  My friend made it sound pretty cute.
And that's all I've got.  I would love something that would make good use of my long curly hair, but the only ideas I can come up with are lame things like a gypsy or eighties girl.  Sorry, but the eighties have been done to DEATH.  I'm NOT going there again.  It's amazing how significant this decision becomes every year.  I just never know what to do about it and I feel like my entire reputation and possibility for happiness rests upon this decision.
*Funny story: when I was dressed as Wanda I had a fellah in my life, but knew the relationship was going downhill and had not yet had the guts to bring it to an end yet (that came about a month later).  As I was out and about with some friends (not including the fellah), I suddenly heard someone cry out "Are you WALDO?"  I turned, and was face to face with... Waldo.  I clarified, that no, I was Wanda, Waldo's girlfriend.  My friends insisted that the crowd (including Waldo) come with us to the party we were heading to.  It was like a Hollywood moment, except that I had a boyfriend.
at October 12, 2010 No comments:
Email ThisBlogThis!Share to TwitterShare to FacebookShare to Pinterest

Why Everyone Should Join OKCupid

I know I've got myself a boy, and no, I'm not shopping around.  I do, however, love flowcharts and statistics, and have often read the OKCupid blog because they do hilarious and interesting analyses of dating site data.  One thing they've come up with is the "Flowchart to My Heart" that uses your answers to a myriad of questions to help determine if someone can date you.  So naturally, I created an account and answered 150 questions just to find out what they would come up with for me.

Can you find your way to my heart? 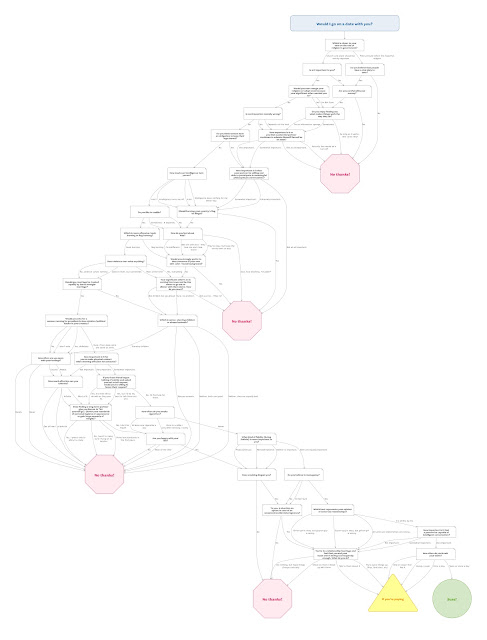 at October 09, 2010 No comments:
Email ThisBlogThis!Share to TwitterShare to FacebookShare to Pinterest

Let's all give thanks, shall we?

Hey folks!  It's Thanksgiving this weekend - if you live in the right country, that is.  So in honour of Turkey day (where I will likely be repealing my ethical-vegetarian status), here are some things I'm thankful for: 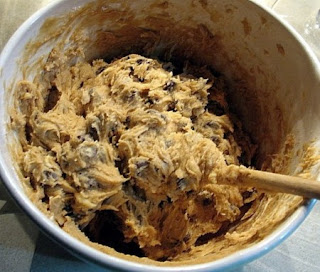