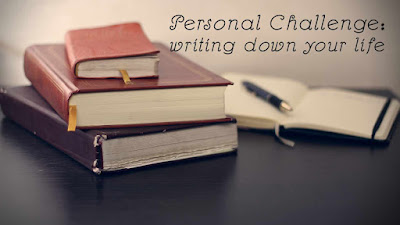 At the beginning of this month I started a new personal challenge.  I wanted to know where all the time was going in my life, so I followed the advice of someone who writes for Lifehacker (as we do) and spent two weeks writing down everything I spent my time on.

HERE'S WHAT I DID

I created my own version of a personal agenda (partially because I didn't want to go out and buy something for a two week challenge, and partially because I had a very specific layout I wanted).  Each page was for one day.  A column on one side was divided into 1 hour timeslots that were tall enough to fit 30 (and even squish 15) minute increments.  There was a large space on the side where I could write other reflections.

My idea was to not only account for all my time during the day, but to spend a little time each evening reflecting: what gave me life that day, what was life-sucking, what I wanted to do more often, what I did because I had to, anything I had planned to do or wanted to do that didn't make it in and why, that kind of thing.  That way not only would I have a record of how my time was spent, but what I wanted to be doing.

Sadly, my agenda, while fulfilling the requirements I wanted in terms of layout, turned out really ugly.

Oh my goodness, I hated doing it.  Stopping throughout the day to record things almost never happened, so at the end of the day (or perhaps a day or two later) I would sit down and fill it in.  I am impressed at how few gaps there are, considering this.

Since my life is so scheduled as it is, I have a strong inner resistance to adding anything that makes it feel more regulated, and writing things down (even if it was after the fact) definitely made me feel that way.

There were swaths of time that were difficult to account for: "computer time" where I would do a mixture of work-stuff, writing, catching up on emails, getting sucked into Facebook, scanning my Feedly - some of that was work, some leisure, some productive, some a waste, and it was all intermingled together.  Part of what I wanted to do was identify where time was being wasted or lost, and I had these chunks of messy, pseudo-productive time to account for.  Very tricky.

Oh, and those personal reflections I was going to do?  Not once did I write them down.  Although I did find myself thinking about them throughout the days more, so there was some self-reflection going on.

HERE'S WHAT I LEARNED

I learned that mostly my time gets eaten up in the ways I would have expected: scheduled activities with friends, work, meetings.  Half the time it felt pointless to write it all down because everything I had done that day was in my calendar already.  This shows me (once again) that I can't sneak my way to having more time without actually giving something up.

I realized that I have a lot of guilt associated with certain social activities - sometimes I feel keenly aware that I'm letting someone down or not giving them enough time or attention.  When that happened my whole day, and possibly the day leading up to it, was tinged with nasty guilt feelings.

Those chunks of pseudo-productive time?  I would have hoped that the mere act of having to account for my time would have motivated me to be more on top of separating them out.  Clearly, it did not.  I wonder if it's a terrible thing, though.  Sure, relaxation is better when you just relax, and we are more productive when we just work on a set task, but maybe I need these wishy-washy periods where I'm kind of doing stuff and kind of not.  Maybe that's good for me.  Or at least I don't need to stress about it.

I learned that when I come home and don't have something I need to do right away, I sit down and look at my phone for a minute and that minute usually turns into 45.  This surprised me.  It shows that I often need to decompress at the end of the day, and that perhaps I could find a better way to do that, like meditating or stretching or lying in savasana for 5 minutes when I come home.  Down time is important, but poking my phone for the better part of an hour isn't exactly life-giving.

IF I WERE TO DO IT AGAIN

Writing everything down in a notebook as it happened (or a day later) felt way too clunky for me.  Perhaps if I worked from home that would be practical, but since I was often in and out quite a bit, it was awkward.  I also had to think about it too much as I was doing it.

Here's how I would make the whole thing work better if I were to do it again:

Streamline the whole process.  Sadly, for me this probably means using technology instead of a paper and pen.  I love the feel of paper and pen, but these days it is almost always quicker and easier to do things using a phone or computer.  I need to accept the fact that paper and pen really is only good for me when it comes to brainstorming, and that's about it.

Also, I was often stuck trying to put my activities into words.  Stopping and describing was a surprising barrier.  So instead of tracking actual activities, I would track categories.  Social, work, home puttering, errands, that kind of thing.  Each time slot could have a colour for the general category, and then "flavour" to give a bit more detail: an icon to show if I had Netflix on in the background the whole time, the names of the people I was with, some kind of rating system for how meaningful the activity was, that kind of thing.  Then, instead of thinking of the right word to describe what I was doing, I just pick a category and a few pre-determined descriptors.  Easy.

For practices like these to work, they have to fit into your life without feeling like a chore.  Discipline is great, but we only have so much capacity for forcing ourselves to do things, and it might be better to save that for things that really matter, not an exercise that's ultimately meant to support your life's activities.
at July 30, 2015
Email ThisBlogThis!Share to TwitterShare to FacebookShare to Pinterest
Labels: challenge accepted, Growth & Advice