Learning! Nobody is special. 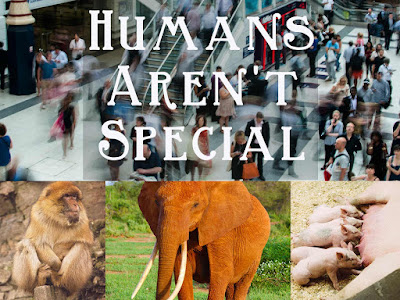 You know how we like to think that we're special?  I don't mean as individuals, where the wisdom "if everyone is special than nobody is special" is technically true, but as a species.  Like how humans like to think that we are somehow better than the rest of nature because of our impressive brains and opposable thumbs that have lead to an incredible capacity for [insert your pet theory on what makes humans unique here].

Well, turns out we're probably not special at all.

Here are some of the things you might think are unique to humans that other animals can do:

Apes have individual personalities and make tools; chimps and humans use the same muscles to smile; chimps and monkeys can read others' facial expressions at least as well as humans can; chimps have a strong sense of morality, friendship, and altruism; chimps will also set aside their general competitive ways when it comes to food gathering in times when cooperation is more beneficial; capuchin monkeys understand fairness and repayment; chimps and other monkeys have been shown to be helpful to each other and other species, opening doors, picking up dropped objects, and the like; rats are altruistic too, saving a friend from getting soaked by water and getting soaked themselves.

So basically, not only do these animals have complex social hierarchies and behaviours, but they have personalities that are at times moral (described as altruistic, helpful, and fair) and at times selfish, just like humans!

Great Apes even seem to have their own version of theory of mind!  (Theory of mind being the ability of babies to learn that other people have their own minds and recognize their mental states.)  Of course, knowing the mental state of others requires conscious awareness of yourself as well - something humans share with many other animals including elephants!

There's more.  Read about it at BBC Earth!
at July 17, 2015
Email ThisBlogThis!Share to TwitterShare to FacebookShare to Pinterest
Labels: *Learn! Fridays, Growth & Advice