Brilliance! The Straight White Man's Guide to the 21st Century 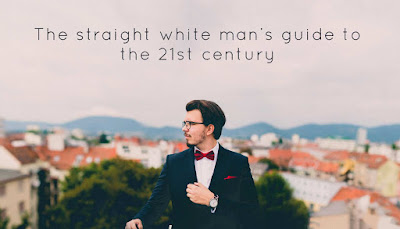 I have conversations now and again with my male friends who feel like they "just can't say anything" or "don't know what the heck they are supposed to do anymore."

To be honest, I only sort of get it, because to me it's not that hard: don't say things that reinforce negative stereotypes or support oppression, unless you agree with said oppression and want everyone to know that.  Or rather, say whatever you want, but be ready for the fact that if you're saying something offensive about another group of people, you might get your rear end torn off and handed to you.  Because, you know, saying mean things about other people reveals a certain unfortunate truth about you, as a person and people are entitled to their reaction.

It doesn't really matter if you know you're "not sexist" or "not racist" or "not homophobic".  Does your audience know that?  Does your remark reinforce that fact in their minds, or provide evidence to the contrary?  If it is potentially hurtful, why do you want to say it so badly, anyways?  What do you want others to see of you and your values, if anything?

To that end, check out BuzzFeed's latest (okay, not actually their latest, because they pump new and "new" content out every five seconds in each time zone): The Straight White Man's Guide to the 21st Century.  It's a brilliant little piece of advice for men who are unsure of how to comport themselves in this day and age.

There are so many good bits in this one, I started to pull each of them out when I realized I was basically turning this article into a bullet-pointed list, in which case, you should just read the original piece.  And you should.  Just click here and do that now.  Or here.  Or maybe click here.  All links in this post go to the same place.

I will, however, share my two favourite quotes that, incidentally, apply to everyone:

"Being adversarial is not an opinion, it’s the opposite of one! Taking a position for opposite’s sake is the fastest way to out yourself as tiresome and a bore. Devil’s Advocate is a motion picture starring Keanu Reeves. Best to leave it that way."