How to Win at Life 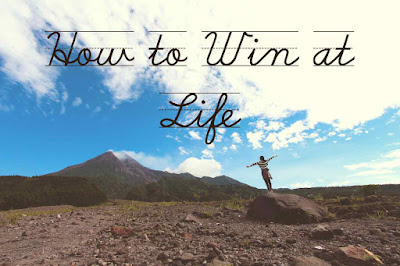 Life is about the small victories, right?  Here are some of the little things that make me feel like I am winning at life.

I do this almost every single night (really it only doesn't happen when I'm not sleeping at home), and man does it make me feel like I'm a winner!  I think this has something to do with the fact that flossing is something we all know that we should do, but most of us can barely bring ourselves to do it in the week leading up to our dentist appointments.

2) When my cat drinks out of the right dish

Cat owners know this weird frustration: cats barely ever drink water and when they do they just never drink out of their dish!  You lay out a nice bowl full of fresh water for them and they ignore it in favour of dirty shower puddles or toilet water or the water you poured for yourself to drink.

Well, I wanted my cat to not die of dehydration, and I didn't want her to be a toilet-drinking cat.  So I cracked her code.  Her preferred water source seemed to be the glass of water I put beside my bed while I slept, so instead of fighting her, I gave in.  She now has her own mug that goes on my bedside table.  And she drinks out of it!  Regularly!  Sometimes she tries to drink out of mine and I gently redirect her, but it totally works.  I am a cat whisperer!  I have solved my cat's hydration problems!

Every time she drinks out of her little mug, I thrill with the victory of being a winner.

3) Taking out the trash

I hate hate hate taking out the trash, so whenever I do it, I feel like I have accomplished something incredible.

4) Spending a whole evening by myself without looking at screens

Most evenings if I get home from work and don't have other plans, I putter around the house, cleaning, taking out the trash (victory!), doing laundry, stretching/exercising, cooking, and generally doing all that life stuff that is hard to get done when you're out most days from 8am-10pm.  I like background noise, and my current default is to put Netflix on to some comedy (because comedies don't tend to have intricate subtleties that you need to be sitting down and paying attention to get) and then go about my business.

Sometimes, however, I put on a podcast or talk radio instead.  Technically it involves a screen to set the thing up, but then I don't spend any time looking at it the rest of the evening (except maybe to load the next episode), and I am left feeling all intellectual and superior to my usual self.  It's pretty winner-ish.

Other times I don't even do any of that.  Other times I just sit down and read a good book and leave my phone on the other side of the room and put on non-obtrusive music in the background (because silence is oppressive and will steal my soul and force my soul to kill my body).  At some point I might get up and do some yoga and then I might sit back down and read some more.  Then at some later point that is much earlier than usual, I get sleepy and go to bed.  It's a quiet, lovely evening.  I feel like a winner, but in a totally serene, calm, rested kind of way.  Like the person who is all "winning or losing doesn't really matter, but I just showed up and did my thing and whatever was meant to happen, happened, and that just happened to be me coming in first but really I was just being true to my spirit."

5) When I figure out a web programming thing

I have to manage a website for my work, and while I have some basic HTML knowledge, I am no programmer.  Every once and a while something goes funny on our website and, to avoid paying someone who actually charges what their time is worth, I spend some time trying to figure it out.  If I do - BLAMMO!  I'm a winner!  I have defeated the internet!
at July 28, 2015
Email ThisBlogThis!Share to TwitterShare to FacebookShare to Pinterest
Labels: Growth & Advice, you're welcome