How our cognitive biases are ruining everything, and how we could use them to trick ourselves into saving the world

I have a theory about systemic biases in the world and a way we can take a big step in combating them. A lot of people aren't going to like it, because it's basically tokenism on fire, but I think it could actually help.

I believe that we could take huge leaps in removing systemic barriers, overturning the patriarchy, and dismantling white supremacy by artificially boosting the numbers of women, people of colour, people with disabilities, queer, trans, overweight, and whatever else you can think of, people in our TV shows, movies, video games, books, stock photography used for advertising, and other entertainment.

Let every writer or ad exec come up with a novel, screenplay, or ad campaign that looks however they want, and then send someone else in to change characters named Ryan to Ming-Na, and so on. I theorize that in 5-10 years we would make significant gains in the rest of society for equality.

Because it would use our brains' cognitive biases for good by changing our implicit biases. 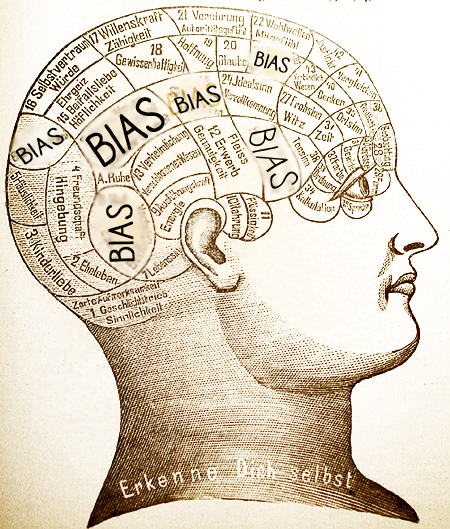 If you don't know about cognitive biases, here's a little psych 101:

Our brains encounter a LOT of information every single day and have to make a ridiculous number of decisions. If we had to consciously sort through it all, we'd never do anything. To free up space for us to stare at budget spreadsheets and groan (or do more enjoyable things), our brains take a looooot of shortcuts. Some of these shortcuts are summarized as cognitive biases.

Here are a few of the common cognitive biases that exist in every single human brain:

The Availability Heuristic: The easier it is to recall information, the more likely we are to think it's true. If something springs to mind right away, we assume it's correct.

The Familiarity Heuristic: The more familiar something is, the more we like it. Also called the "mere exposure effect", because merely being exposed to something makes us like it more.

Bandwagon Effect: We are more likely to adopt a belief if other people around us hold that belief.

Implicit Bias: This is more socially-constructed than cognitive in origin, and is (in my opinion) the resulting impact of all the other biases rolled up in one. Implicit biases are the attitudes or stereotypes we hold about a group of people without being aware of them, that often go against our stated beliefs. For example, people who think they aren't racist who subconsciously view black people as dumb, dangerous, and bad. Fun fact: since implicit bias comes at us subconsciously from all aspects of society around us, it can help people hold negative views about their own group.

(Side note: if you think you're exempt from these biases, there's a name for that, too: Blind Spot Bias. This is when you see biases in others but not in yourself. These are all scientifically tested and confirmed as things that human brains do.)

Implicit bias affects us all.

The researchers who discovered implicit bias did it through a test that revealed anti-black and pro-white associations (black being associated with danger and badness, white with safety and goodness). They would take the test every day to observe if there were any changes, even consciously trying to change their test scores. Only once did one of them succeed: that morning he had watched a speech by Martin Luther King Jr. on television. He came in to work, took the test, and the implicit bias had disappeared*.

They realized that being exposed to positive examples of black people that were salient, recent, and easy to remember, changed the bias.

Do you see where I'm going with this?

Right now, there's a cycle going on. Our mass entertainment (the stuff that's meant to appeal to everyone) centres around one kind of person: white, male, heterosexual, able-bodied, fit, etc. The vast majority of advertising and entertainment confirms the story that white people and their experiences are normal, that male stories are universal, and so on. So then what is going to be more familiar? What will be easier to recall? What will our sense of the "bandwagon" of beliefs surrounding us be? What implicit biases will come out of this?

With some notable exceptions, there is a clear picture of what is "mainstream" and what is "special interest" in our society right now, and that matters to our brains.

We could start a new cycle.

What if names like Abdullah and Satoshi were just as common on television as Adam and Jennifer? What if ads for dish soap featured just as many men expertly doing the dishes as women? What if exciting video games were played from the perspectives of people with disabilities? What if the doctors, lawyers, cleaning people, magazine editors, terrorists, romantic leads, superheroes, singers, and news anchors that we saw represented in our entertainment and advertising were a genuine mix of race, cultural background, religion, gender, sexuality, ability, and body type?

What if all of that was mainstream?

Would resumes with "ethnic"-sounding names still get fewer job interviews if we could all easily recall examples of capable people from those ethnicities? Would men still feel outnumbered when 33% of the people around them were female if the culture surrounding them made it clear that a 50/50 ratio was normal? Would police still have such a strong fear-response to black people that they shoot black boys whose hands are in the air if they were more familiar with images of safe and friendly black people? Would people be so angry at the idea of a trans woman in a washroom if they had easily available examples of actual transgender people in their minds?

Inserting diversity into our entertainment would not solve all our problems. Not by a long shot. But would it help us as we do the harder work? Can we hack our cognitive biases to help push us towards confronting systemic barriers in the workplace or biases that are leading directly to violence?

I think it would. At the very least, I think it's a) possible and b) technically an easy thing to test.

Now all we have to do is convince every gatekeeper to entertainment media to get on board with the experiment. Easy, right?

So, that's my theory! Ready? Poke holes in it. Tell me what's missing. Let's make it better - or throw it out if needed.

*This is a story I remember discussing in at least two psychology classes, but I now can't find any evidence of it. I presume it was in some of my intro psych textbooks, but those aren't available online to confirm. So I guess take it with a grain of salt.


The Receptionist Delivers!
Sign up for my email newsletter for a weekly digest and BONUS CONTENT!
SaveSaveSaveSave
at July 13, 2017
Email ThisBlogThis!Share to TwitterShare to FacebookShare to Pinterest
Labels: thinking things, what it means to be human