Ladies! Listen up! Our time has COME thanks to Mensez!

What's Mensez, you ask? Judging by the name, it's a platform for men to share their thoughts and feelings (you know, "man says", but written out all cool-like?)

It's a new menstrual product invented by a man who thinks he understands women's anatomy (and desires) better than we do. So essentially, it's mansplaining in product form.

The product itself is a lipstick-shaped glue that a refined woman would use to stick together her labia, holding period blood in. Then, when she pees, it dissolves the glue and her pee and period blood all flow down into the toilet. Then, I guess, she re-glues herself?

So.... No. Nobody wants this. I mean, maybe some people want this, but I can't imagine that being comfortable AT ALL, let alone leak-proof. How is this an improvement over pads, tampons, Diva Cups, period undies, or getting an IUD and not even having a period????

Also, the website is also hilarious. Let's unpack it: 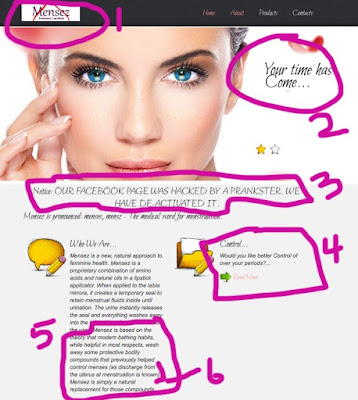 The whole thing is kind of blurry/pixelated, even the text, giving the website a sort of 1996 Geocities look (minus the flashing text). In fact, the font, picture, and layout really give the whole thing a very old school vibe, but not really in a good way.

Also, I know that the feminine hygiene industry loves posting pictures of women's faces when talking about our reproductive organs, but this picture seems especially out of place, since it's clearly a stock image for mascara. Or maybe contact lenses. Or mind-reading.

1) The tag line for this product is "a feminine lip-stick."

Because lipstick is generally considered to be so masculine? Also, hahaha, "lip-stick", because it looks like lipstick and it sticks our lips together! So funny!

Kudos for coming up with a dramatic line, but for what? What time? Was I waiting for something? I don't understand.

Actually, here's what I am waiting for: I am waiting for a national childcare strategy, so that more women are able to go back to work after having children; I am waiting for women of colour to start earning the 77 cents on the dollar that white women make, so that we can all start working towards equal wages; I am waiting for transgendered people to be considered equal to their cis-gendered counterparts.

Does Mensez help with any of that, or is it just a weird glue that will probably come apart at the most inopportune time, releasing a cascade of period blood all at once?

3) It's always a good sign when a company has a message like this on their front page.

PR tip: instead of putting a note on the front page of your website, simply take down the invitation to like you on Facebook on other parts of your site. Maybe put a small note there explaining why your Facebook page is gone.

4) "Control... would you like more control over your period?"

Okay, let's say that I do want more control over my period. What would that actually look like?

The first thing that springs to mind is being able to decide when it does or doesn't happen. That is the epitome of control, right?

If I can't do that, then maybe controlling my period would look like, oh I don't know, taking a pill that determines when my period happens and having the choice to skip it over by taking more pills if I want to, or having a little device inserted into my body that completely stops my period from happening. THAT sounds like having more control over my period.

Perhaps it's my period-addled brain, but I just don't understand how gluing my labia together gives me any more control over my period than tampons, pads, or menstrual cups, nor do I see how a clip-art image of a file folder and pencil connects to this concept at all.

5) "Mensez is based on the theory that modern bathing habits, while helpful in most respects, wash away some protective bodily compounds that previously helped control menses (as discharge from the uterus at menstruation is known). Mensez is simply a natural replacement for those compounds."

I can't even think of what to google to fact-check this. Because I'm pretty sure women in the past just had normal periods.

Also, what is he talking about with "modern bathing habits"? Douching? Soap? Because those things are bad for our vaginas and so I don't think that's a super common practice.

6) This website is FULL of explanations of what menses is.

WE GET IT. It refers to menstrual fluids. Also, we just call them periods, usually. Is this website for women, who have periods and understand what they are? Or for men who are a bit confused about what a period even is?

OH OH OH OH OH! On another page it says "Mensez Feminine Lip-Stick: for the woman you could be"!

By "the woman I could be" are you referring to a much more uncomfortable, nervous, and irritable woman? Because I can only imagine that as the outcome of gluing my vulva shut five days a month.

Finally, an inspirational quote from the creator of this product:


“[Y]ou as a woman should have come up with a better solution than diapers and plugs, but you didn’t. Reason being women are focused on and distracted by your period 25% of the time, making them far less productive than they could be. Women tend to be far more creative than men, but their periods that [sic] stifle them and play with their heads.”
-Daniel Dopps

Read more of his gems in this Forbes interview.

Mr. Dopps! Please tell us more about our bodies and brains and potential. We're listening!

The Receptionist Delivers!
Sign up for my email newsletter for a weekly digest and BONUS CONTENT!
at February 21, 2017
Email ThisBlogThis!Share to TwitterShare to FacebookShare to Pinterest
Labels: happy feminism, Issues & Ideas, What's Right is Right