Looking for a way to resist? The Indivisible Guide is quite possibly the most well thought-out and effective technique I've come across. Short version: create an action group with some like-minded friends (or neighbours or strangers); talk (repeatedly) to your representatives; go to public events where your representatives will be; keep doing it.

Lady Gaga at the Super Bowl

I'm not going to lie, I legit cried watching this performance. I mean, CRIED. I snuffled and snotted and currently have tears dried to my face as I type this. (Apparently Lady G cried after she finished, too, so we're basically the same.) Why? Because I am a big sappy weirdo who cries at everything, for one, and one of the things that has ALWAYS gotten me are these kinds of performances that look like someone chucked their entire heart at it. But it was also the deeply embedded political message of the show.

Framing the whole thing with America the Beautiful and This Land is My Land, and then singing her songs of complicated love and self-acceptance, as well as LGBTQ anthem Born This Way was powerful. Beginning her song Million Reasons, a song about being on the verge of leaving her lover, by saying "How are you doing America, Texas, the world?", and then following it up with Bad Romance? STATEMENT.

Read about it and watch the performance in Teen Vogue (the new political resistance mag).

As an aside, I was off the Lady Gaga train for a while, but this performance and her AMAZING album Joanne has turned me right back into a Gagahead or Lady Lover or whatever you want to call me.

Cry Me a River

To be honest, I don't know if I love the fact that this dancer choreographed this piece with a "river of women" to show his indifference towards an ex-lover, but whatever. Inspiration comes from anywhere, and the synchronicity and movement here is incredible.

Cry Me a River from Andrew Winghart on Vimeo.

This stunning photo of a jellyfish in the ocean looks like it's floating through space. Just imagine: giant space jellyfish, floating around, bumping into things. Pretty sweet.

A reminder that people are a little more multi-faceted than we tend to give them credit for: Ina Garten, The Barefoot Contessa, before having her own cooking show, got an MBA and worked for the government. She wrote the budget for the US Nuclear Program as well as policy papers. 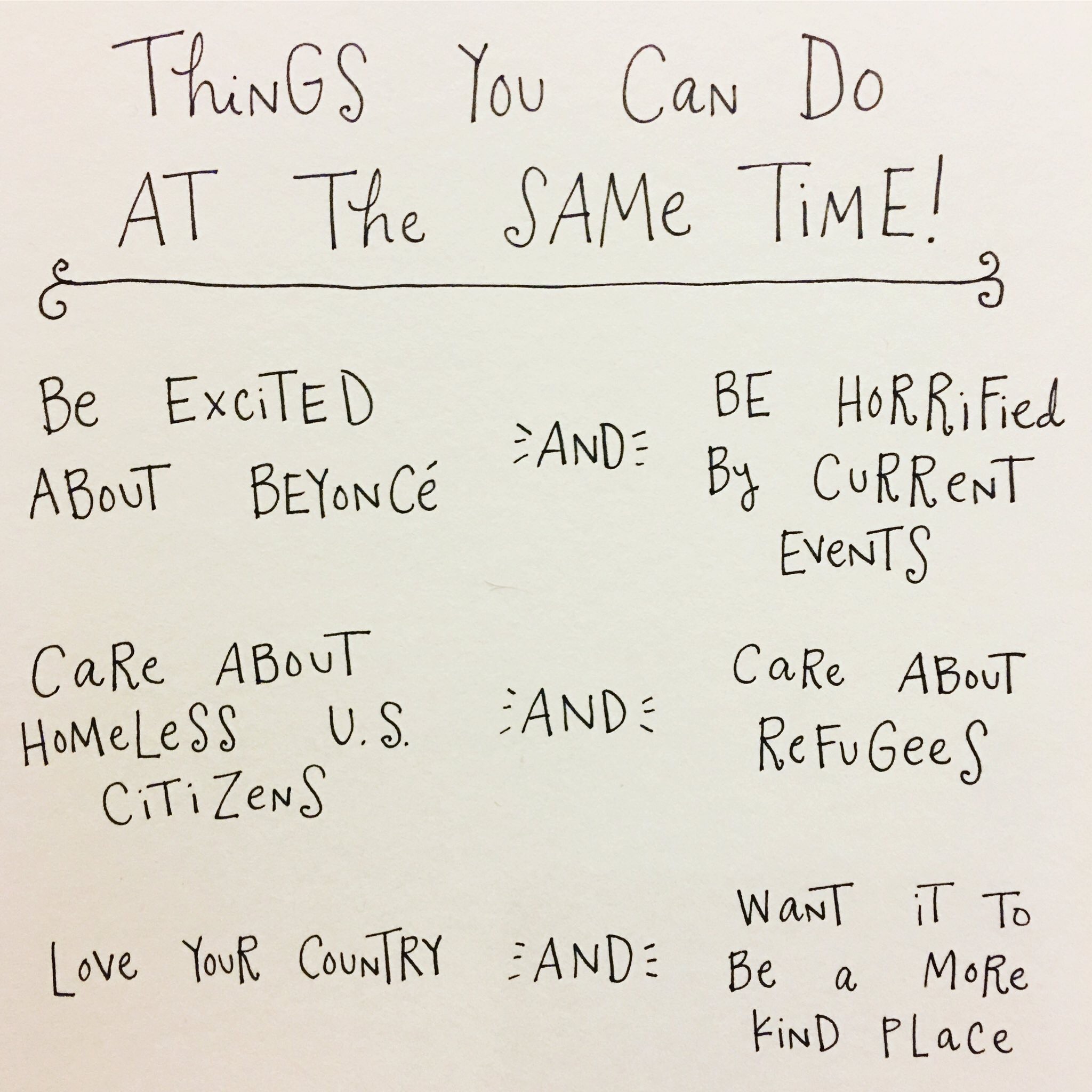 My brave and smart friend Lisa had a run-in in a hair salon and posted about it on Facebook. She gave me permission to share her post.

"... They don't work; they're lazy, you know. Those immigrants expect the government to take care of them, put them up in hotels, give them everything they need... We can't afford to do that. And that's why Trump is doing what he's doing—to stop that from happening."

All three hairdressers behind the counter are obviously uncomfortable. The racist's hairdresser uses me as an out:

Hairdresser: Hi, how are you?!
Me: (pause.) Welllll, I'll be much better when I don't have to listen to racist bullshit.
Silence. A brief stillness that feels an eternity.

Old Racist pays for his service, everyone is polite. Old Racist glares at me as he gets his coat on. I start shaking, I am so upset. I kind of lose my cool just as he's walking out.

me: How dare he say that *about his own people* when he is living on land stolen from MY people?!

The hairdresser and I debrief as I make my purchase. I call him on his silence; I don't mince words. I educate him and his colleagues. Then I give him language for next time... and there *will* be a next time.

Because that old racist is not going to be persuaded or changed by someone like me. And I don't expect him to be. What I do expect, however, is to be able to stand inches from another human being in a shared, public space and not be subjected to racism or language that incites white supremacy and/ or hatred.

Talking to the hairdresser, I hear it all, all the excuses we've all had, that we all hear. They are the justifications for our collective inaction and silence. There is no room for fence sitters, anymore; there is too much at stake... our very humanity.

"I'm not political."
Then be moral.

"I think everyone is equal."
Then your voice/ opinion is just as important.

"I didn't want to offend/ upset anyone."
Then don't; respond with respect, equal authority, and clarity.

"I didn't know what to say."
Then say you're uncomfortable with what is being said.

"They have a right to say what they want."
Then so do you.

"He/ She/They was/ are a customer/ friend/ family member."
Then decide if that's who you want occupying your space. And what will you lose by their absence?

Those shakes? The temperature flush? The sick feeling in your stomach? Your body's right: it IS dangerous. There is the potential that the other person's hatred will turn on you and hurt you. But what is even more dangerous is the permission—the power—that Hatred gains from your silence. Because with your silence... with your permission, Hate is emboldened by the lack of obstacles in its way and it WILL go out and hurt as many as it can until it's war.

Her call to action is so clear and concise and valuable. I love and appreciate how she addresses the discomfort and reluctance people have to get involved. I love the suggestion that, if someone is being racist or otherwise inappropriate, and we don't know what to say but are uncomfortable, we can simply state that discomfort. That is enough of a statement, and is valuable and important to say.

Japanese artist group Chim↑Pom installed a treehouse in a neighbourhood of Tijuana that borders on California, looking over the wall that separates the two countries into the States.