“‘In every good marriage,’ she counseled, ‘it helps sometimes to be a little deaf.’ I have followed that advice assiduously, and not only at home through 56 years of a marital partnership nonpareil [Ginsburg’s husband Martin died in 2010]. I have employed it as well in every workplace, including the Supreme Court. When a thoughtless or unkind word is spoken, best tune out. Reacting in anger or annoyance will not advance one’s ability to persuade.”
– Ruth Bader Ginsburg

This is, of course, sage advice. Sometimes you've just got to turn a deaf ear and a blind eye to something. My question is not on the wisdom of the suggestion, but on carrying it through. How the HECK are you supposed to do that??? Like, actually, how? Are any of you good at ignoring or forgetting mean or hurtful comments? From people you love? I mean, it's one thing to write off some idiotic statement from a person you don't care about, but from your beloved? UGH, I am SO BAD AT THAT! I can't even be around my partner when he's in a bad mood without it rubbing off on me, and he doesn't say mean things.

Ooooh, this one is fun! Check out Bonnie Lucas' series of works that she calls "feminine monsters", featured on Hyperallergic. She takes sugar and spice and make them oh so not nice.

A lot of goal-setting practices have you imagining your future self as you would like to be, and then figure out how to get there. Here's another tactic: imagine that you don't really change anything about your life. What will it be like in 5-10 years?

Don't forget that inflation is a real thing that is guaranteed to happen, and that certain things will always deteriorate, like your body, relationships that have been left unattended, and skills you aren't practicing.

As I watch all my friends have babies, and hope to one day carry one of those little criers around, I am both discouraged and encouraged to read some real talk about parenting: some parents - some mothers - regret having children. And that's okay. I mean, it sucks, because you can't undo having kids, even if you run away from them, they're still there, but it's okay to realize that, just like any other life decision, you don't have to be constantly happy about being a parent.

How to Double Female Filmmakers

Tropfest is the world's largest short film festival, and a little while ago they realized that they had a tiny number of female finalists in their competition. They looked around, realized that implicit bias is a thing, and decided to judge the films without knowing the name or age of the participant.

The owner of Little Caesars, who just passed away, is now revealed to have paid Rosa Parks' rent for years. What a perfect example of a person doing what they can to help! He was a wealthy white man, and knew that one thing he could do is support this woman so that she had a roof over her head while she fought for her rights.

My friend Alison made this excellent cross stitch, reminding us all of Marcel the Shell's wisest words. 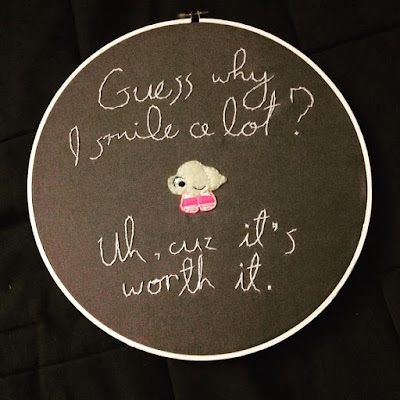 The Receptionist Delivers!
Sign up for my email newsletter for a weekly digest and BONUS CONTENT!
at February 22, 2017
Email ThisBlogThis!Share to TwitterShare to FacebookShare to Pinterest
Labels: *Inspiration! Wednesdays, Art & Inspiration