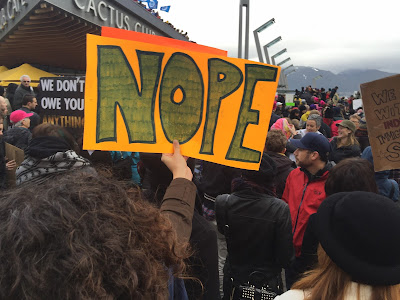 Last weekend was so beautiful, wasn't it? We marched, we stood, we shouted, and we revelled in the unity of men and women around the world who believe that women's rights matter.

Then, one might say everything got trampled over with a handful of executive orders that I'm not even going to link to because it makes me too sad.

So the question we must all be asking is "what's next?"

First thing, for anyone who looks like me, let's remember our role as white allies and fighters. Let's not forget the history of racism as it intersects with feminism nor sit back and let things continue now that we've "said our piece."

If someone is talking to you about something they are afraid about, or a problematic thing that's happening in our protest culture, hear them out. 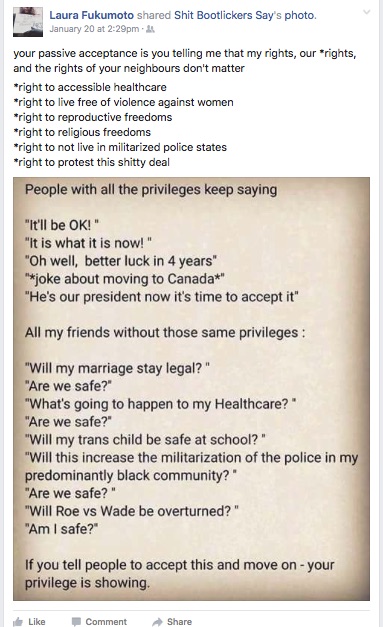 Look up some photos from the Women's March and compare those to what happened during the race-related protests last summer. The difference is riot gear vs. selfies in pussy hats. We were treated differently.

Check out this graphic essay on the lessons the Civil Rights Movement can teach us now. It's so so so good. Read the whole thing. My main takeaways: be brave (put yourself on the line), be specific (don't protest TRUMP, protest specific policies and practices that make a difference), be prepared (learn and train in protest history, philosophy, and tactics), be faithful (both in not giving up and in being backed by a faith/philosophy bigger than yourself), retain joy and dignity, don't worry about agreeing on everything.

Read historical protesters like bell hooks and Malcolm X and Martin Luther King Jr. Read new writers like Ta-Nehisi Coates and Helene Cixous. Read from perspectives that aren't your own.

If you have a question about something going on in the protest, read about it. Google is your friend. Read from the perspective of those affected by the issue.

There is all sorts of training that might be valuable to the coming years. Get your First Aid certification (hey, we should all do this anyway). Mental Health First Aid - that's a thing, at least in Canada. Update yourself on emergency and non-emergency lines in your area and who to contact if you need help (this might include your local women's shelters, your city's non-emergency report line, a nurse's hotline, etc.)

Train in bystander intervention, protest techniques, or how to recognize when someone is manipulating you.

Learn about media literacy. Even if you consider yourself a wizened skeptic. Read this letter from a journalist in Russia to get an idea of what to expect in American press.

This is the best tip I've seen, posted in this excellent article by The Span of My Hips: write things down.

Write down what things you would never do, to remind yourself never to do them when the time arises. Write down things that aren't normal or aren't okay in society to check against when news stories come up. Keep a running note tracking hate crimes.

Our sense of what is normal is very vulnerable to circumstances - a psychological reality that abusers and dictators are very good at taking advantage of. RIGHT NOW, take a look at the world and think about a few categories (health, safety, privacy, education, equal rights) and write down what you think is normal and acceptable standards in these areas. This list may come in handy when you start to slip into thinking that something is okay.

CONTINUE TO STAND UP!

It felt good to march on Saturday. It felt good to be united and to know I was putting myself out there. Guess what? There is more marching to do. Here in Vancouver, there is a march coming up for DTES Women, who have historically been hunted, killed, and abused with nary a word.

What are the issues in your city? Stand with those.

Write letters, or better yet, call your representatives on the phone. I know, I know. We hate using our phones and talking to an actual stranger about something we believe in is SCARY. Well, too bad. Losing our rights and giving in to a dictator is scarier. I have heard from several people who worked in MP offices that emails and letters are easily ignored, not phone calls.

If you have money, donate it! Go big and donate to Planned Parenthood (looks like they're going to need it), or find a local organization that is fighting the good fight.

Okay, here's where it gets overwhelming. If I think about everything that needs help - well, it's impossible! There are causes related to Indigenous rights, racism, sexism, homophobia, transphobia, science, the environment, animal rights, torture, babies, plus all the intersections between all these things.

How am I supposed to do this? This is too much!

First of all, let's breathe.

Second, you're right. It's too much. Yet, change doesn't come if people march once and then go back to bingeing on Netflix.

In my opinion, we have to pick our causes AND remain flexible and open to all. Pick something to pour most of your protest-related attention and resources into, just don't let that shut you down to caring about other causes. You want to pour your attention into protecting women's reproductive rights? Great! Sometimes that means showing that women who care about reproductive rights also care about Black Lives or Indigenous Rights. Or at the very least, listening and supporting your sisters and brothers who are fighting their fight as you fight your own.

I suggest a two-pronged approach to picking your causes: what are you most passionate about? Where is help most needed? Now reverse the importance of those two questions. Start where the need is.

REMEMBER THE REST OF THE WORLD EXISTS!

While it is completely understandable that the "Western" world is getting fired up and marching for women's rights after the Trump election. It hits really really close to home when this stuff starts happening in America. Don't forget, though, that atrocities worse than this are happening all over the world.

You know all those comparisons between Trump and Putin? That's because THIS STUFF HAS BEEN GOING ON THERE FOR A LONG TIME. Remember when a school full of little girls were kidnapped in Nigeria? Remember how female genital mutilation is still a thing in a LOT of places? Remember Malala?

TAKE CARE OF YOURSELF!

Last night my friend and I were talking about how sometimes you have to choose between being informed and being sane. Turn off Facebook for a while. Spend time in nature. Take a bath. Do something that makes you feel good. Treat yo self.

The causes will literally never stop, but that doesn't mean you have to let them constantly wear you down. Find the things that allow you to rest your heart, mind, and soul, and do them.

Start by doing them for five minutes a day (like my five minute art-making therapy), if you don't feel like you have time for more. That's still five minutes of rest you wouldn't have otherwise had.

The Receptionist Delivers!
Sign up for my email newsletter for a weekly digest and BONUS CONTENT!
at January 26, 2017
Email ThisBlogThis!Share to TwitterShare to FacebookShare to Pinterest
Labels: Issues & Ideas, newsy