ME TOO. Now can we try to do something to actually make this better, please? 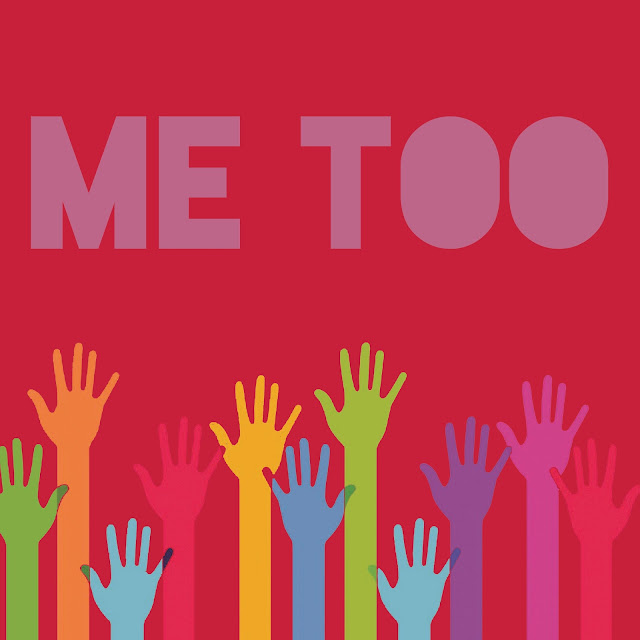 Yesterday I woke up to see a bunch of friends with ME TOO as their status on Facebook.

If you're one of the superior beings who didn't join social media (I assume because you are a deity who already knows what your friends ate for breakfast), this is a campaign to try to show the depth and breadth of the sexual harassment problem. Any woman (or person) who has experienced sexual harassment or assault was invited to make a status that says "me too" as a simple way of showing they have had this experience.

The first time I saw it I thought, "Seriously? AGAIN? Didn't we do this five minutes ago with #yesallwomen? I don't know how anyone thinks this will make an actual difference if that didn't." (I still participated, because, I don't know. Why not? Maybe it will be another drop in the bucket of healing for someone?)

Scrolling through and seeing all the variations of "me too", my heart didn't break. I wasn't shocked.


If you are publicly perceived to be female, it's a given. Same goes for those who present as somewhere "in between" or not fitting into the gender binary (probably with some violence mixed in). For those who appear to be men, it's probably more accurate to say that "many" have had this experience, although perhaps it is universal as well.

Because of this, it never crossed my mind that a single woman I know has lived a life free of sexual harassment and/or assault and it wasn't surprising to see it overwhelm my feed.

A lot of men were posting things along the lines of, "I see you, I hear you, I support you", in response.

While that is a nice thing to say, it does not actually make me feel all that supported. I am not confident those men will call their friends out if they make demeaning comments about women or say something if they see a man taking home a woman who is clearly too drunk for anything. I am not even confident all those men would believe me if I had a traumatic assault experience.

The posts from that felt legitimately supportive said something like, "I have contributed to the problem. I have not always treated women the way I should have. I'm sorry. I will try to do better."

And if we're honest, we should all be saying that, women included. Sexual assault and harassment is almost an inevitable experience in our broken culture, and we are all perpetrators and victims.

I have objectified others. I have made shaming comments about other peoples' sexual behaviour. I have pushed when I should have stopped. I have laughed at the wrong things and been too afraid to step in when a situation looked bad. I have been a part of the problem by my action and my inaction.

Maybe we need to get our grade school on and make a giant chart of behaviours we'd like to change. Then we can pick one (pick an easy one to start, it's okay) and work on it. We can give ourselves gold stars for our progress.

Avoided telling a stranger what I thought of their body. GOLD STAR!
Noticed that someone was resisting my advances and stopped. GOLD STAR!
Said "not cool" when a friend made an objectifying joke. GOLD STAR!
Did something nice for someone I was attracted to without expecting sex in return. GOLD STAR!
Thought of a hilarious comment that involves shaming someone for their sexual activity and then kept it to myself. GOLD STAR!

To be clear: I do not think that we deserve awards for being decent people. We should be better because it's the right thing to do. However, humans are humans and tangible (if minimal) rewards are very motivating. If gold stars would ACTUALLY HELP CHANGE THINGS, why the heck not? I am willing to try something ridiculous if it makes a material, positive change in the world.

Also, let's not get over the top. This should be an entirely private reward system. Give yourself your gold star, feel good that you made a positive change in your life, and then move on to make another. No public sharing or accolades allowed.


The Receptionist Delivers!
Sign up for my email newsletter for a weekly digest and BONUS CONTENT!
at October 17, 2017
Email ThisBlogThis!Share to TwitterShare to FacebookShare to Pinterest
Labels: happy feminism, Issues & Ideas, What's Right is Right