What Men Fear Most

This is a stunningly captivating beat poem and video about men and feelings.

Here's a concept I think about regularly. I don't really like it, because it makes me wonder what I'm not doing, but it's also important:

"If you're not drowning, you're a lifeguard."
-Seth Godin, What Will You Do With Your Surplus?

This 3rd grader's poem on what it is to be a woman is getting all the love on the feminist internet. 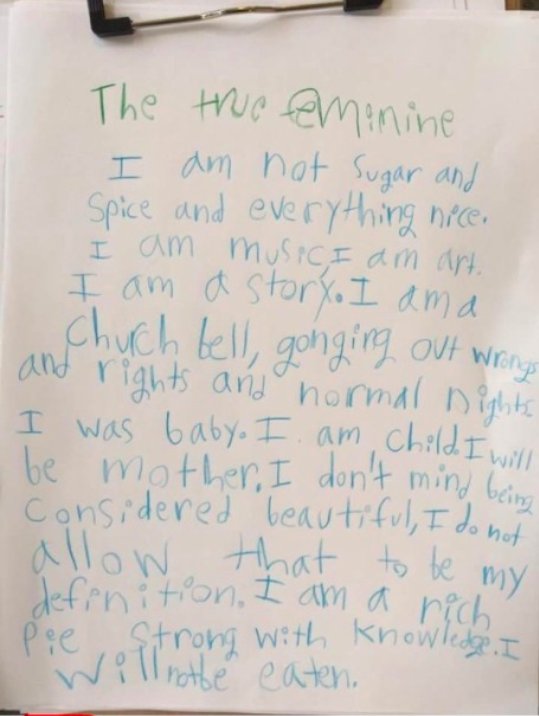 I found it here, but I'm sure it came from somewhere else.

I am captivated by Mikiko Hara's street photography. She walked around holding a camera at waste level and shot things she thought were interesting. It's beautiful and carefree and a nostalgic exploration of the everyday.

“i do not expect my child’s respect.
just because i have given birth to their life.
does not mean they owe me.
anything.
what i want most
is to look into my child’s eyes
and
see
that i have given birth
to
a
heart.
have
honored.
held and feed.
someones
heart.
from the moment we first met.
and
they love me for it.”
― Nayyirah Waheed (via Swiss Miss)

Island of the Colourblind


Photographer Sanne de Wilde visited a Polynesian island where disproportionately large numbers of the population have colour blindness. He photographed the island in black and white and infrared. It's stunning!

This article in Man Repeller unpacking the idea that a person could just think of their body as "nice" is lovely. (The person in question here is actress Debi Mazar.)

"Calling something or someone “nice” is the verbal equivalent of a shrug. It’s a filler word plopped into an apathetic characterization for lack of any other newsworthy quality, a word used when you cannot conjure a single strong feeling, positive or negative, about whatever it is you’re being made to describe. That’s what makes Mazar’s gentle indifference radical. It’s as if she’s saying, 'What’s the big deal?'"


The Receptionist Delivers!
Sign up for my email newsletter for a weekly digest and BONUS CONTENT!
at October 25, 2017
Email ThisBlogThis!Share to TwitterShare to FacebookShare to Pinterest
Labels: *Inspiration! Wednesdays, art, Art & Inspiration