I finally read Roxane Gay's Bad Feminism! (Just some light vacation reading.) Bad Feminism is a collection of essays from novelist and professor and all-around very very smart woman Roxane Gay. They are about feminism, obviously. 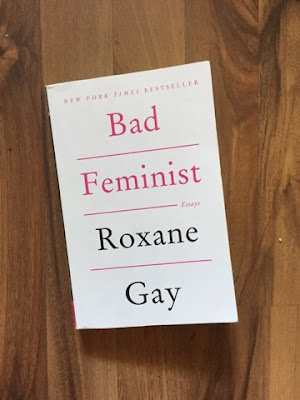 Honestly, overall I didn't really love reading it. It's hard to say exactly why. She is very smart. Her ideas are, largely, fantastic. She writes incredibly well.

Despite not really loving reading it, I would highly recommend it to everyone. It is 100% worth the time it takes to read.

The main thing (I can put my finger on) that I didn't love: the analyses of books and TV shows I haven't read or watched yet. I mean, it seemed like she was sharing some interesting ideas, but I had never read the books, so there was little to connect to after about a page.

The main thing I disagreed with: her interpretation of "likability" in characters. She criticizes it, saying that characters who are likeable (especially the female ones) follow the rules, that they are good and sweet and predictable and charming and nice and generous. I disagree. Likeable doesn't mean unflawed. It doesn't mean perfect. None of the people I like in real life are perfect, I would I expect that of a fictional character? When I am reading a book, I am spending a LOT of time with its protagonist. If I completely loathe the person, it overshadows anything interesting about them and the story. I stopped reading Prelude to Foundation largely for this reason - Seldon was such a little turd I couldn't take his idiocy anymore. Perhaps likeable is not quite the right word, but there has to be an in - something that makes me willing to spend so much time hanging out with them and listening to their story. If they are a terrible person, fine (good even), but what is interesting about them? Why do I care? Do I want to invest in them? Because reading a book is an investment.

Her vulnerability and honesty is incredible. She is so open about her own struggle with likability. Her pride. Her sexual assault. Her body. Her experience of privilege. Her experience of racism. I like to think I am vulnerable and honest sometimes, but I am only vulnerable and honest about the things I don't mind talking about, which may be honest, but it's not actually vulnerable at all. Roxane Gay is vulnerable. Or maybe not, maybe she's also keeping the hardest things inside, and they are just different for her than for me.

There is a conversation about Trigger Warnings that is pretty great: "Few are willing to consider the possibility that trigger warnings might be ineffective, impractical, and necessary for creating safe spaces all at once. The illusion of safety is as frustrating as it is powerful."

I am reminded of how whitewashed my entertainment choices are, and she made me want to watch more Black Cinema and Black Television. She discusses the show Girlfriends in depth. It sounds good. I wish I'd already watched it. I have no idea where I'll watch it if it's not on Netflix because that is so much work to track down shows elsewhere, which is, of course, part of how my entertainment choices have come from such a limited pool in the first place.

THANK YOU, Ms. Gay, for your chapter on female friendship. I have never understood this notion that women are supposed to make horrible friends and that we're always in competition with each other. Sure, I feel jealous of my lady friends who "have it all" and are golden nymphs of dreaminess. I also feel jealous of my male friends, just for different things (so far I don't think I have a male friend who I'd describe as "a golden nymph of dreaminess"). I think the problem here is my own insecurity, not women. Women are great.

Her discussion of rape jokes is really wonderful. Unlike Roxane Gay, I think there are some rape jokes that are funny, given their framing and source. She does not, and she makes her point very well: "rape is many things--humiliating, degrading, physically and emotionally painful, exhausting, irritating, and sometimes, it is even banal. It is rarely funny for most women."

There are so many excellent quotes. If I had been reading my own copy of the book, I would have underlined the heck out of it. It was, however, my friend's and she didn't underline it so I didn't either, because that would be rude. I did, however, photograph some of my favourite quotes, re-written here because pictures of book quotes almost never work very well (which never stops me from trying and from Instagramming a few to lacklustre results):


"My own parents ask, How is my daughter doing? I offer them some version of the truth."

"Better is not good enough,"

"Sometimes, saying what others are afraid or unwilling to say is just being an asshole."

"I wish, in all things, for a perfect world."

“It's hard not to feel humorless, as a woman and a feminist, to recognize misogyny in so many forms, some great and some small, and know you're not imagining things. It's hard to be told to lighten up because if you lighten up any more, you're going to float the fuck away. The problem is not that one of these things is happening; it's that they are all happening, concurrently and constantly.”

Finally, enjoy this wonderfully amused eye-roll from Ms. Gay herself:

The Receptionist Delivers!
Sign up for my email newsletter for a weekly digest and BONUS CONTENT!
at September 06, 2016
Email ThisBlogThis!Share to TwitterShare to FacebookShare to Pinterest
Labels: (Pop) Culture, Art & Inspiration, bookish