"If there’s one rule that applies everywhere, it’s that Irony Doesn’t Scale. Jokes and asides can be taken out of context; witty complaints can be read as lack of enthusiasm. People are watching closely for clues to their future. Your dry little bon mot can be read as “He’s joking but maybe we are doomed!” You are always just one hilarious joke away from a sick system."
-Richard Ziade


"Endings are tough, particularly these days. You don't want to tie every knot because it looks old-fashioned and artificial if you do, but how do you find the sense of an ending and still the ambiguity that gives a play weight?"

The big news in Canadian healthcare last week was a protest from doctors against a pay raise they were given, arguing that they are already being paid enough and perhaps that money should go to nurses, clerks, and other support staff instead.

It is both mind-blowing and so incredibly obvious that this could and should happen. Very proud of all these doctors right now.

The caption for this image says, "May my hope for others never be darkened by my personal disappointments," and it fills me with heart emojis.

"I’ve got to look at all of my options carefully, even the ones I find distasteful. I know I can broaden the definition of winning to the point where I can’t lose."
-Audre Lorde on her fight with cancer


Why Did God Create Atheists?

A friend of mine posted this on Facebook, and I think it's a beautiful notion to consider, whether you identify more with the atheist or religious person in the text. 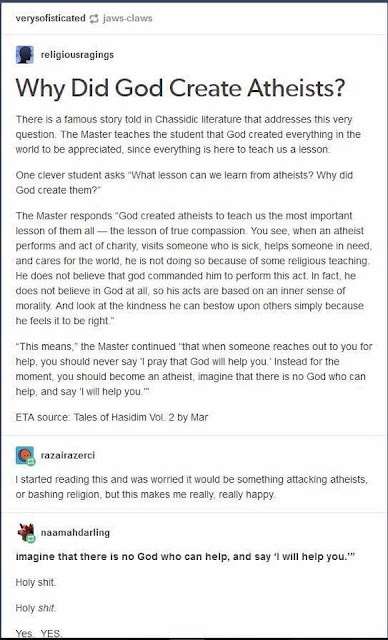 Ballet on a Pole

This video of a male ballet dancer pole dancing is gorgeous!

The Receptionist Delivers!
Sign up for my email newsletter for a weekly digest and BONUS CONTENT!
at March 14, 2018
Email ThisBlogThis!Share to TwitterShare to FacebookShare to Pinterest
Labels: *Inspiration! Wednesdays, art, Art & Inspiration, quotes