Why Does Everyone Think I'm Going to Punch Them?

A memory:
Comedies when I was young that had a consistent trope: a guy approaches a girl to ask her to dance or on a date, and instead of just saying no, she slaps him or dumps water on his head or something semi-violent or humiliating.
(It's worth noting that usually these guys were not being inappropriate or creepy, they simply gave an offer that was not reciprocated.)
Another memory:
It was about a week after my sixteenth or seventeenth birthday. One of my guy friends, who had come to my party, made a comment that he almost bought me some kind of perfume as my birthday gift, but he didn't know if I would like it and "didn't want to get punched."
Something current:
This post from one of my fave Instagram accounts, Not a Wolf: 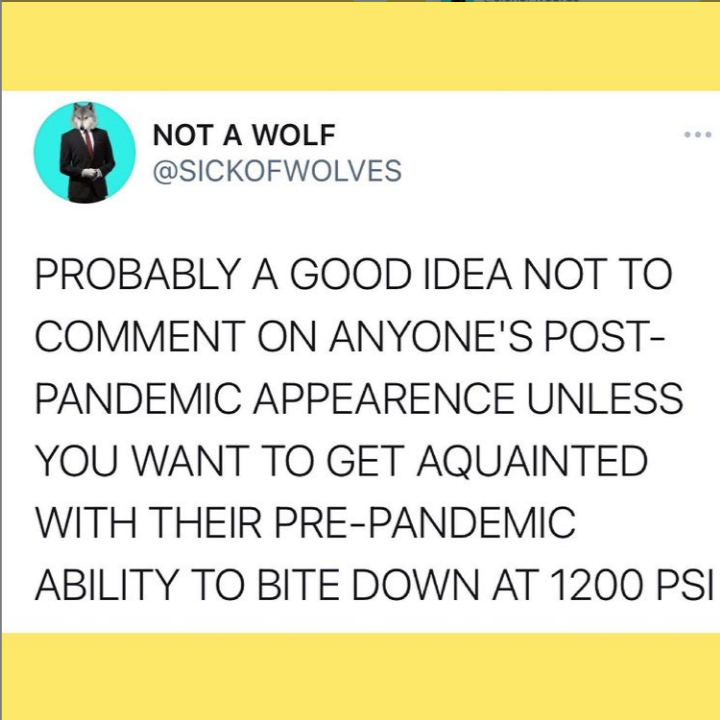 What do all these situations have in common?
MEN!
Men used to almost exclusively write for TV and movies, and they featured women responding aggressively to unwanted male attention.
Then, a boy I knew watched those shows all growing up and got it into his head that if he gave me a gift I didn't like I might... PUNCH him???
Finally, a grown adult man today makes a joke that the reason you shouldn't comment on other people's bodies isn't because of human decency but because of the violence they may inflict on you in return.
I get that the first and last things here are JOKES and the whole point is that they are exaggerated FOR THE COMEDY.
The question still stands: how much of men's understanding of how women should behave do you think is filtered through the things a bunch of dudes in the 90s thought would be funny?
The Receptionist Delivers!
Sign up for my email newsletter for a bi-weekly digest and bonus content!
at June 01, 2021
Email ThisBlogThis!Share to TwitterShare to FacebookShare to Pinterest
Labels: (Pop) Culture, happy feminism, Issues & Ideas