The Last Thing We Need is a Hero

My favourites are the reluctant superhero stories, where a regular person is called to greatness. When they set aside their own desires and priorities for the Greater Good, fighting the good fight. I am here for the journey, here for the moments when they think it's too hard and want to give up, when they realize that humanity/the earth/peace/hope is worth fighting for and step back in with a new fire and DO IT. They save us all!

At various times in my life, I have imagined myself being that hero. Being the one who stands up and does the right thing and makes everything better. However, and I say this with the least amount of self-pity possible, the best I could realistically hope for is to be the hero's sidekick, with a far greater chance to be one of the ones watching from the sidelines. (Case in point: the last time I re-read the Harry Potter books, all I could see was the millions of opportunities for our trio of heroes to report what was going on to the teachers and let them take care of it.)

Around the time of the climate strikes, two things happened.

First, I started having conversations with a friend about a very big problem with superhero narratives.

What's the problem with superhero narratives? Nothing, if all you're looking at is a story about the fight of good vs. evil and some big-screen production values. Everything, if you realize that, in the real world, we all have a role to play in actually fighting evil in the world and that superhero narratives just absolves the rest of us of our responsibility in the whole thing.

The second thing that happened is my friend posting this meme on Facebook: 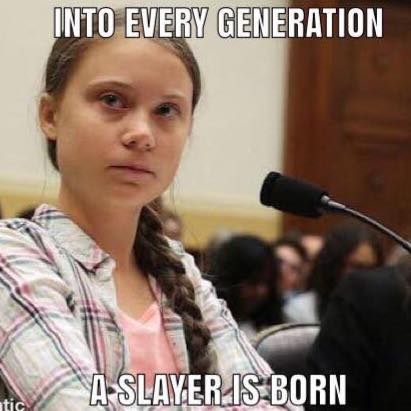 (If you haven't been up on your late-90s-early-00s lady-hero television, this is a Buffy the Vampire Slayer reference.)

Of course, this meme is just an example of how Greta Thunberg has been cast in the role of The Hero We Need, which is HUGELY problematic for several reasons.

1) I know Buffy is all about a young girl who suddenly finds out her life is forfeit because she was unwittingly born to fight vampires, but in real life why on earth would we want to put that much pressure on one girl's shoulders?

2) It ignores the incredible work being done by many other people, including a number of Indigenous and POC young girls and women.

3) Fighting climate change is not the same as slaying demons. It requires a TEAM EFFORT. (Not to make small individual changes that put teensy dents in the overall problem while overloading us all with guilt for having dared to even think about straws, but to force governments and corporations to change the system.) By casting Ms. Thunberg as a hero fighting for us all, we are at serious risk at thinking the fight is dealt with.

By making Greta Thunberg into our climate change-fighting hero, we let ourselves off the hook, and this is one hook we should all be on.

So, to continue the Buffy narrative, consider this the Season 3 final fight where Buffy enlisted all her classmates to fight a giant snake demon. Sure, we need a leader to come up with a strategy (and, by the by, as brilliant as Greta is, she might not be the best person for that particular job), and then we all have to take our posts and do our part!

So PICK UP YOUR FLAME-THROWER, HIDE IT UNDER YOUR GRADUATION GOWN, AND WAIT FOR YOUR CUE TO FIRE!

(Sorry if you didn't get that reference, but hopefully that means you are intrigued enough to watch Buffy straight through, in which case, you're welcome. Also maybe flame-throwers aren't the weapon of choice in the battle against climate change, thanks to all the forest fires, so let's leave those at home.)

Some groups or individuals who are working on strategies to bring change include Extinction Rebellion, Green Climate Fund, the Climate Action Network, and 350.org.