Yes, but who REALLY invented the GIF?

I would like to take a moment and take credit for gifs.  No, I didn't do a single thing in helping them get invented.  Here is what I did do: sort of describe them, way back in the 90's.

I was looking through a photo album with some friends, thinking about how cool it would be if each photo could be like a little short film.  Like 5-10 seconds to show some movement of the thing.  Like how pictures in Harry Potter move, except a short loop of the moment the picture was taken.

The internet was barely a thing back then and the idea of looking at pictures online was crazy because it took just FOREVER to load just one crappy picture on your computer, so I was thinking about basically using magic to make actual printed photographs have little videos inside them.  But still!  Basically I wanted to make printed gifs!  And let's be honest, we are maybe 5 years away from paper computers, and then my dream will basically be a reality.

That's right, kids!  I thought of gifs first!  So next time you're reading a sweet Buzzfeed list of 25 gifs that will make you laugh all the time, know that it's not Steve Wilhite.  It's me.  (You can go ahead and ignore the fact that apparently gifs were technically invented in 1987, because come on, nobody knew what they were until like, last year, right?)

I know, I know.  You're super impressed, right? 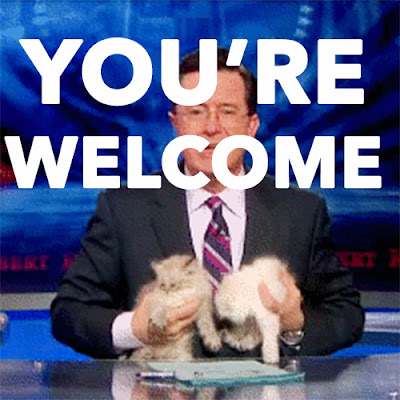 at March 08, 2016
Email ThisBlogThis!Share to TwitterShare to FacebookShare to Pinterest
Labels: Growth & Advice, Whimsy, you're welcome