Personal Challenge: After The Hypoallergenic Diet 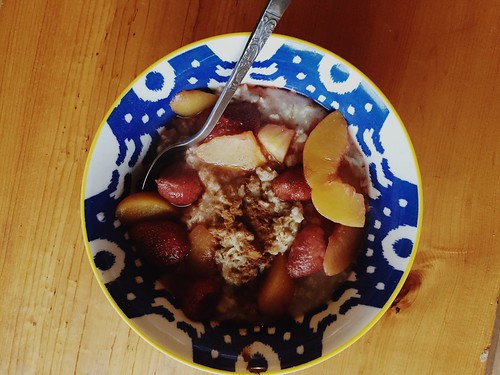 For the past two and half weeks, I have been on a hypoallergenic diet.  Some people also call it the anti-inflammation diet.  I liked to call it my "zero happiness" diet, because I didn't get to eat anything that made me happy.  Like, at all.

Okay, I exaggerate.  I like hummus, and I ate a LOT of hummus.  Quinoa is great.  I finally tried nutritional yeast, and it's very tasty.  Vegetables and beans mixed in with quinoa and potatoes with nutritional yeast sprinkled on top?  That's good.

Still, no gluten, no dairy, no soy, no peanuts or cashews, no corn, no eggs, no sugar (including syrups and honey), no artificial sugar, no refined oils or margarine, no table salt, no caffeine, no alcohol.  No fun!

As per usual, I have some observations based on my latest harrowing experience.

If you don't like reading about people's pooping habits, just move right on, because the kind of movement I'm talking about here is bowel movement.  I pooped a LOT on this diet.  Well, at the start anyways.  The second day I pooped FOUR TIMES.  Then it 2-3 times a day for a few days before going back to normal.

According to some people it's good to poo multiple times a day, and if we were eating enough fibre we would ALL be popping squats all the time.  At least at the start, this diet got me one step closer to that.

That said, my boyfriend, who also did the diet, had kind of the opposite experience with his bowel movements.  So who knows.

I spent about double my normal food budget for the time I was on this diet, which doesn't really make sense, right?.  Living off rice and vegetables should be cheaper, shouldn't it?

There are a few obvious expensive things that I didn't strictly have to buy, but did in order to up the satisfaction quotient: quinoa, nutritional yeast, nuts, seeds, and stevia.  These are nowhere near the discount bin in your average grocery store.

Plus, because I was eating a plant-based diet, I needed to eat a lot more food than I normally would.  If you don't have bread or noodles or tortillas or peanut butter or eggs to make something filling, you need more volume to do the trick.  So while fruits veg aren't expensive, I still wound up buying a lot more than usual.

Of course, it's hard to argue that eating double the fruit and veg you normally do is a bad thing, but it is, apparently, not a cheap thing.


Breakfasts were the worst!

Breakfast is by far my favourite meal of the day.  For years, I have made myself a veggie egg scramble on toast every single morning for breakfast.  It is so so so good.  Going from that to plain oatmeal?  Don't even talk to me about that.  It's clearly the worst.

Sure, I could put fruit in my oatmeal.  And I bought stevia and almond milk (two pricier items) specifically so that I would be able to transform it from plain, clumpy gruel into something edible.  Still.  My first morning off the diet, I scrambled my eggs with glee.  GLEE!  It was the best breakfast ever!

When in doubt, roast it

I already knew that roasting is not only mega-easy but has some kind of mystical deliciousness-concentrating effect on vegetables, and this experience really reinforced that.  You want something to be good, then roast it.

I even made some of my own trail mix for a hike (because what else do you do if you're hiking and can't eat peanuts, bread, chips, granola bars, or any of the other easy-to-hike-with food?) by roasting almonds, pumpkin seeds, and sunflower seeds, and it was basically the best thing ever. 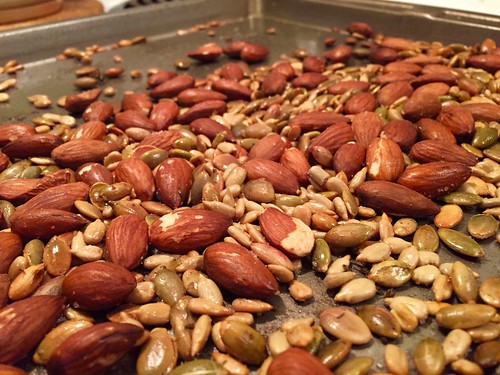 When eating is way more work, you do it less

Basically the only "grab and go" foods available to me were baby carrots and hummus or hummus on rice cakes.  Basically, sticking hummus on stuff was the only option that didn't involve significant prep work.  The result?  I definitely ate less.

This is not a bad thing, because I think I was getting in the habit of eating too much before (a whole bag of chips as an afternoon snack? Don't mind if I do!), but the lower volume of food also lead to pretty much ongoing dissatisfaction in the stomach-area.

That said, if you have an actual goal of eating less and maybe losing some weight, this will probably work.  Not, if you ask me, because "bread makes you fat" or some hogwash like that, but because bread is convenient and easy to eat and thus it is really easy to eat more than you actually need, where it's a lot harder to eat more quinoa and veg salad than you actually need.

Hummus goes with so many things

As you may have noticed from how much I've talked about hummus already, by the end of this diet, I was putting hummus on everything.  Everything.  It was one of the few things that gave meals that sense of "oomph" and a bit more satisfying completeness.  Luckily, it mixes in very well with quinoa or rice-based meals.

So the take away lessons from this diet are: when in doubt, roast it or put hummus on it.  Or maybe both.  Also, try throwing some avocado in there.