Batman vs. Superman: Reactions and Spoilers 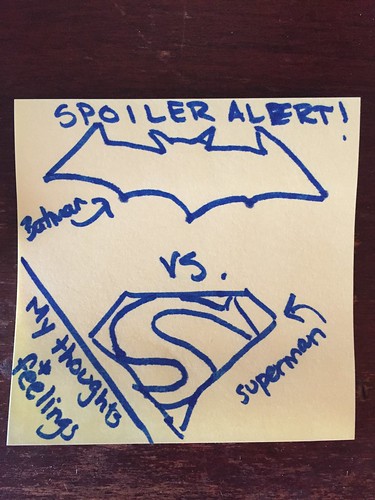 Last week I watched Batman vs. Superman: Dawn of Justice.  If you have read anything about it online, you already know it has terrible reviews.  Here are my reactions after watching (with lots of spoilers):

It was missing a lot of titles

If it was actually going to be Batman vs. Superman, then the movie would have spent about the first 45-60 minutes building up tension between them, slowly giving them reasons why they would be forced to fight.  Instead, there were a whole bunch of random things thrown in there throughout the entire movie.  Here are the many short films contained within this 2.5 hour long film:

Superman and Batman Fight For About Five Minutes Before Teaming Up Against a Bigger Monster (tag line: They would have probably lost if Wonder Woman hadn't shown up.)

Does America Trust Superman? (They Blame Him for Everything)

How Dark Will Batman Go While Still Fighting For Good?

How Many Times Can Lois Lane Run Into a Situation Thinking She Will Be Useful and Then Almost Die?

Speaking of Wonder Woman, she is the best one

She has a tiny part in the movie, but basically shows up and is the only one who can actually damage Lex Luthor's giant abomination-monster all on her own.  She is super confident and a smooth operator both in battle and when stealing intel at fancy parties.

It is obvious that the filmmakers also thought she was the best because they give her the coolest theme music.

It's all about mom

The thing that stops Batman from trying to kill Superman?  Their moms have the same name.  "Your mom's name is Martha?  My mom's name was Martha!  Never mind the shoddy motivation the film built for me to want to kill you, I can't do it now, bro.  Come on, let's go save your mom so I can feel like I'm saving my own mom in the process."  Awwww, cute!

Seriously though, what was this movie about?

I already said this, but it bears repeating: what the heck was this movie actually about?  It definitely was not about Batman and Superman rising up against each other, because they hardly even did that.

I mean, you get a little bit of how they both think that the other one is dangerous and needs to be exposed/contained, but then out of the blue, Batman goes from trying to catch the leader of a sex trafficking ring (legit goal) to desperately needing to kill Superman and Superman goes from wanting to write an article questioning Batman to getting all manipulated by Lex Luthor into killing him, even though Lex obviously had bigger plans, what with his Super Monster Abomination Thing that would just kill everyone regardless.


Lex Luthor was a cool villain - sort of, at first

For about the first half of the movie, Lex Luthor was a cool villain that I don't think we've seen much of before.  He was sort of like what would happen if Mark Zuckerberg or the head of Google or some other super hip tech company went legitimately evil: he wears sweet kicks and eats candy while demanding access to alien technology and comes off like a scatterbrained genius who is more concerned about doing something "cool" than something that is "right".

We get it, Superman is a Christ figure, but he actually didn't need to die

He could have given the kryptonite spear to either Wonder Woman or Batman and they could have used it and then Superman would not have to dramatically die, only to have his "resurrection" hinted at right at the end of the movie.  I mean, sure, then they couldn't have reinforced his supreme goodness with Christ-like self-sacrifice that not only shook off any darkness they put on him in this movie but also motivated Batman to say that humans are basically good at the end.

Still, it was a bit much.  Sort of like in the fifth Harry Potter book when Hermione is all like, "Harry, you kind of have a thing for rushing out and saving people when you don't need to and maybe you aren't the best person for this job" and then Harry gets all mad and does it anyways and then his godfather dies and it's basically all his fault.

Why the heck is his funeral procession on a horse and buggy?  Seriously.  They're farmers, not Amish.  Or are they Amish?  Or maybe do they travel back in time for the funeral?

Also, they missed a golden opportunity to draw in some 90's fun by not playing Superman's Dead by Our Lady Peace.
at March 29, 2016
Email ThisBlogThis!Share to TwitterShare to FacebookShare to Pinterest
Labels: happy feminism, Issues & Ideas, newsy, What's Right is Right