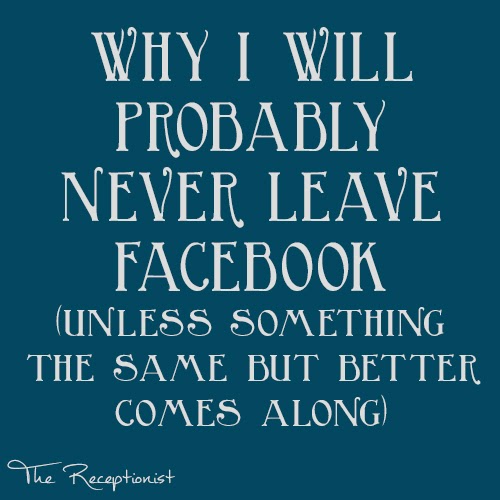 I know, I know.  Facebook is fraught with problems.  Privacy violations, misogyny, turning relationships into weak social interactions and destroying our attention spans…  But there are also some very very good things that happen when you gather everyone you know all in one place.  Yes, it can be used for self-promotion, image-crafting, and general showing off, but it can also be used for GOOD!  Yes, good.  It is a crowd, and you know what you can do with a crowd?  Source things.

Examples, with names made blurry for privacy.  Except for mine, just my last name so you can at least track the conversation: 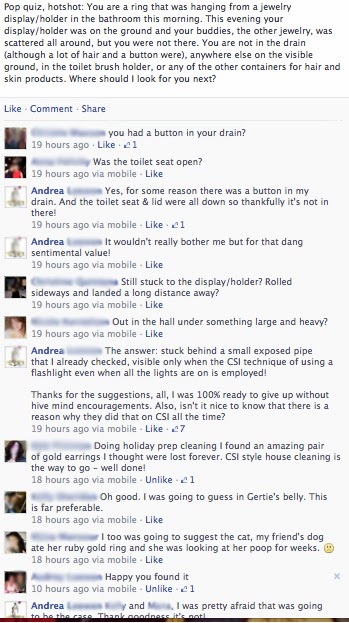 The other night I couldn't find a very precious ring.  Now this would fall, by most peoples' standards, into the "nobody cares about your ____" file, because, really?  Did my 650 Facebook friends need to know about this?  No, they didn't.  But I was feeling at a loss and I live by myself so I didn't have anyone to talk to about it.  I needed a crowd to cheer me on and give me ideas so I wouldn't give up looking.  I could have texted a few friends, but this way I got to crowd source a lot more people, and also felt a lot more like I had to keep looking so I could report back that it was found.  And it worked, I found it! 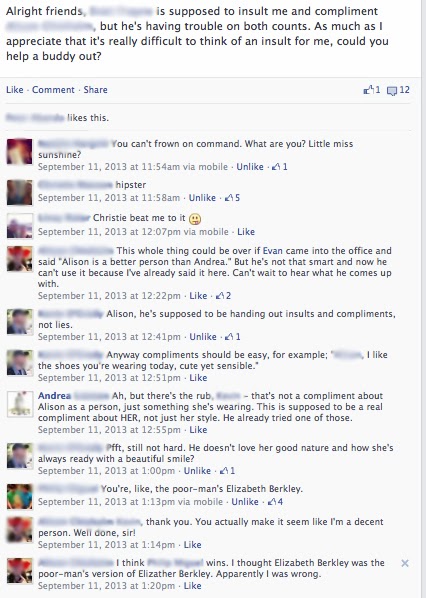 Sometimes you just need a clever insult and it isn't coming.  Luckily, you have a whole lot of people who can chime in and help you settle a score. 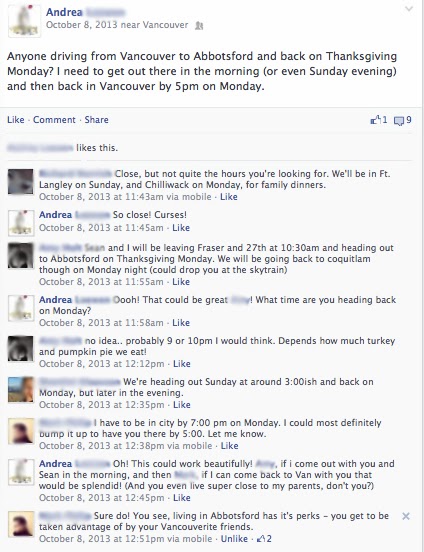 I live in Vancouver and don't have a car.  My family lives in Abbotsford.  That means that unless my travels match up with another family member, I'm in Hoopsville.  Or I would be, if not for Facebook and its magical power to crowd source rides!  And here's the thing: the two people I wound up catching rides with aren't people I ever would have thought to ask.  They are friends, sure, but not "part of my everyday life"-type friends.  We know each other well enough that we hang out once and a while, but it wouldn't occur to me to call them up for a ride.  In fact, it wouldn't have occurred to me to ask any of the people who replied for a ride, because I'm only really comfortable directly asking a favour like that to really close friends.  This was different - they offered their services! It was a beautiful moment.

This is why I think Facebook is never going away.  Instagram is awesome for sharing pictures.  Twitter is fun for mini-conversations and articles.  Facebook is where the entire group connects.  I read somewhere years ago that the connections that bring people "upward" in their mobility (jobs, roommates, places to live, etc.) come not from close friends, but from acquaintances.  I can't think of how many times I've posted on Facebook a question or request and almost immediately received multiple answers, and of course, I've been able to do the same.

So, yes, there are many problems with this social network that has eaten our brains.  But this is not one of them.  Thank you, Facebook, for giving us the power to source our crowds!

(PS: I feel kind of icky ending a post on such a ridiculously upbeat statement about Facebook, so now I'm going to talk about something else.  Like… your mom.  I hear she's nice!)
at January 21, 2014
Email ThisBlogThis!Share to TwitterShare to FacebookShare to Pinterest
Labels: thinking things