This week's learning is about deep frying. The other day at work we were chatting about historic snack foods. At first we all assumed that whatever people snacked on back in the day must have been super healthy because they didn't have all the food-shaped high fructose corn syrup, flavoured with extra salt and death that we currently snack on. Then we realized that we as humans have probably been deep frying for some time, which is not super healthy, and that got me curious: how long have we been deep frying for? Answer: a long time. 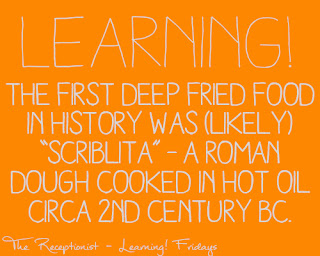 It's kind of difficult to actually nail this down, because we've been frying food basically ever since we figured out how to make things hot. And of course, we put some kind of oil on the frying surface pretty quickly because of the stickiness and the flavour. So where do you draw the line and say that something was deep fried vs. fried in a lot of oil?

Well, I drew the line by googling it and then finding the source that dated back the furthest, which was this page called All About the History and Evolution of Fried Dough. Apparently the first known instance of putting dough into hot oil is scriblita from 2nd Century (BC) Rome.

Just one more way the Romans saved/ruined the human race, all at the same time.
at January 10, 2014
Email ThisBlogThis!Share to TwitterShare to FacebookShare to Pinterest
Labels: *Learn! Fridays, Growth & Advice