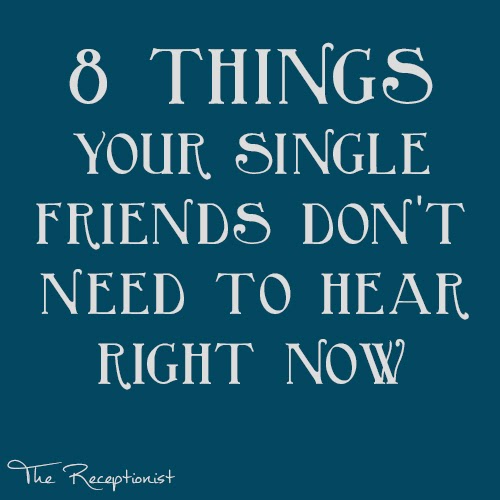 With the risk of sounding like a cynical version of Bridget Jones, I would like to share some not-that-helpful phrases that people in relationships say to people who are single kind of way too often.  Yes, it's another round of "what not to say to your single friends", edition 5,134,320.2 on the internet.

At the end of this list, you might feel like you aren't allowed to say ANYTHING to your single friends about their relationship status.  Not true!  You can ask them how it's going, express an interest, be encouraging about how awesome they are, and even give advice on a specific scenario, if they ask for it.  Just remember that your perspective is now shifted.  What worked for you may not work for them.  And let's keep the platitudes at bay, shall we?

1) You'll find it when you're not looking.

This is actually the worst thing you could say, for two reasons:

One: it's a lie!  Most people are in some stage of "looking for someone" when they meet their partner, because hardly anyone is actually not looking.  Otherwise, no one would meet anyone through online dating, set ups, going to a party they don't really want to but there might be some new faces there, or any of the other things people who are "looking" do that can, actually, work.

Two: what you've essentially just told your friend is that if they stop being such a desperate, needy, sucky baby their life might actually work out and they'll meet someone.  Unless they actually are being a desperate, needy, sucky baby and need to be snapped into shape, don't say this.  And if they are, there is a much clearer and more helpful way to communicate the issue with them.

Here is the tiny grain of truth in this statement: you don't know when or how you're going to meet your next love.  The actual times I met the people I've fallen in love with, I was not expecting to meet them at that specific moment.  But that doesn't mean that in my heartiest of hearts I wasn't looking for someone to love.  It just means that when your roommate has friends over, you don't expect one of them to be the primary force of love and pain in your life for the next two years.

It also implies that there is some kind of formula, which there is NOT.

If you're going to say anything to do with meeting through friends or being "best friends" first, let's take this offramp at Questionville and check in on a couple things.  Is this your lead up to telling me about an amazing eligible you've been hiding away in the wings for me?  Is this your lead up to pointing out the best friend who I didn't realize I was attracted to until just now?  If the answer is not yes to one those, then stop here.  And if you're going to say online dating, save it.  Every single person has either tried online dating or serious mulled over the question and decided it wasn't for them.  They may change their mind, but that won't be because their friends who are already in amazing relationships think they should.

And again, with the formula and there not being one.

3) I didn't think they were right for you.

Okay, this one has a foot in two camps.  One one hand, it is helpful post break-up to know that you haven't "let one get away" and that you can and should move on because that love was not the right love for you.  On the other hand, it also can make "freshly-single me" feel a bit like "foolish, doesn't know how to pick 'em me", and even if that's true, now is probably not the time to point that out.  Plus, chances are good that you said you liked the person while we were dating, so now I'm just confused.  One of these times you were lying, which was it?  Because I want to be able to believe you next time you say you like someone I'm dating.

5) Why don't you have a boyfriend/girlfriend?

Chances are that the main reason is this: do you know anyone I should be dating?  Exactly, me neither. If I am not close enough with you to have already been more honest about whatever inner struggles might actually be preventing me from being in a relationship, then just scoop that question back into your mouth and swallow it, please.

6) You don't know how hard it is to be in a relationship.  Sometimes I wish I were single.

Now you're just being condescending.  First of all, just because your friend isn't married doesn't mean they are blissfully unaware of the difficulties of being in a relationship.  Mostly, though, if you actually wished you were single you would be heart-wrenchingly confiding that you are thinking about breaking up with your partner.

We both know that having someone to love and be loved by and share life with is better than being able to make travel plans exactly the way you want to or leave dishes in the sink for a day or two.  If it wasn't, people would stop attaching themselves to these vacation-scheduling, dish commandos.

7) I was single before I met [person I spend all my time with now], so I know what it's like.

If you've been in a solid, loving relationship for more than a year then, sorry sister (or brother), you no longer know what it's like.  First of all, you may still remember your experience of having been single, but now it's all coloured as a part of "your story" of "how you met".  It's got an ending.

Besides, my experience of singleness throughout my life changes all the time - with age, with each ended relationship, and with other random circumstances, a new perspective arrives on my lap and in my heart.  Sometimes it's worse and sometimes it's better, but it's always different.  So chances are really good that you don't know what it's like for me to be single right now and you shouldn't pretend you do.

BONUS!  (This one comes from the already-single to the newly-single): Welcome to the singles club!  Woo hoo!  High five!

I get it, you're trying to paint singlehood in a positive light and make me feel good about the transition.  But really, you're saying that you're happy my relationship ended, and that feels crummy.

UPDATE: A few friends have asked me, since posting this, who it was directed to/what the anger's all about.  Just to clarify: this is not a passive-aggressive message to anyone in particular, nor am I angry at anyone in particular.  These are just things I've heard throughout my various single times in life, and I thought it would be entertaining to write about them.
at January 09, 2014
Email ThisBlogThis!Share to TwitterShare to FacebookShare to Pinterest
Labels: Growth & Advice, Help Yourself, relationshipping