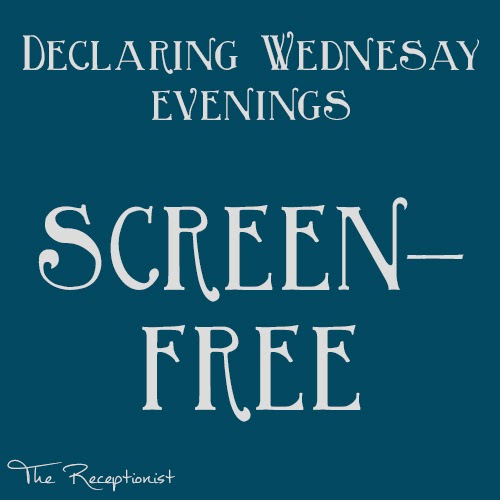 In yet another of my constant personal challenges (the No Sugar/No Alcohol November being the most recent), I have decided to restrict my use of screens one night a week.

Honestly, this is probably better described as a "decision" than a "challenge", because while there will be some habit-breaking, it's not going to kill me.  But challenge just sounds better.  So.  CHALLENGE ACCEPTED.

Some background logic: I don't think screen-related activities are bad in and of themselves, but they have become a default activity, which I don't like.  I don't fetishize life in the 90's when my family shared one computer, nor do I reject social media or modern technology, I simply want to remind myself that my devices are primarily utilitarian in function and don't need to be default distractions for any moment my mind isn't otherwise occupied.  Evenings where I talk to friends, read, and/or listen to music, I simply feel happier, healthier, and sleep better.

Plus, my eyesight has rapidly deteriorated since getting a smart phone, so I am fantasizing that it will magically improve when I restrict access one night a week.

I would restrict it even more, say a whole weekend day or several evenings a week, but I do a lot of writing in my off-time, and so I need to keep that option opening.  Maybe after a while I'll expand the restricted days, but allow a caveat for writing.  For now, one evening a week is the testing ground.

Thus, Wednesday evenings have been officially declared as Screen-Free, from the time I leave the office to the time I wake up the next morning.

The reality of what this means:

Definitely no TV or laptop use, whatsoever.

On the phone I am permitted to talk (communication in real-time is good) and use the phone for utilitarian functions.  This means:


When it comes to large screens, as in a movie theatre, I'm going to allow it because I go see movies with people, so that's social.  Oh!  And the screen of my e-reader is allowed, because using it means I'm reading (which is desirable) and it's not a backlit screen nor does it lend itself to any other distractions.

What do I hope to do more of:
at January 19, 2014
Email ThisBlogThis!Share to TwitterShare to FacebookShare to Pinterest
Labels: healthiness, Help Yourself, technology