on lena dunham, vogue, and boxes 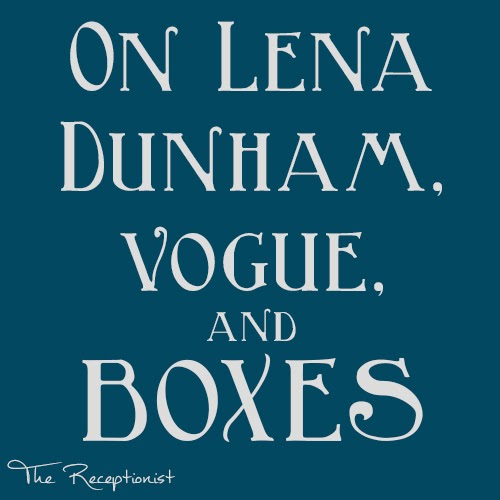 Let's talk about Lena Dunham, Vogue, and boxes.  No, not sexy lady boxes.  I'm talking about the boxes that people use to categorize and understand each other, specifically, the "you are not allowed to care about how you look because you're a feminist symbol of a 'real body'" box people keep putting Lena Dunham in.

A few days ago on the CBC there was a panel discussing Lena Dunham and her Vogue cover, and specifically Jezebel's backlash to the images.  The discussion was good, but I was eternally frustrated that it even needed to happen in the first place.  I don't blame the CBC for jumping on this, they are smart to bring a sexy current issue to the air, and Anna Maria Tremanti was awesome for assembling such a smart array of women to discuss it.

The debate that's raging, from Jezebel to the CBC to, I don't know, probably a lot of other peoples' blogs, can essentially be phrased "should we expect this one woman to do the exact same thing all the time?"

Answer: no.  No, we shouldn't.  Just because Lena Dunham has a TV show where she shows off her un-Hollywood body doesn't mean she can't want to look hot in Vogue.  She does not owe us anything, certainly not always presenting herself in one particular way.

The background issue is cognitive: our brains are full of boxes where we put all the things and people we encounter.  When we meet someone new, our brains quickly and subconsciously file away a set of expectations about them based on how they've presented themselves to us.  We put them into the boxes that seem appropriate for them based on their gender, culture, age, style, and even how they talk.  These boxes come with some expectations - meet a middle-aged outspoken Italian man who dresses well and you make a few assumptions about things he might do, want, or care about.

This level of categorizing and stereotyping people I don't have a problem with.  It's how our brains work, an efficient cognitive system that frees up mental bandwidth for more pressing issues.  What does cause problems is when we then hold that individual person to those generalized expectations that came from the boxes we put them in.

People are nuanced, boxes are not.  People hold razor-thin distinctions between concepts and actions that are acceptable or not depending on a whole host of factors that range from noble to selfish.  People present themselves differently in different situations.  People are creatures of context with conflicting desires that come out in different ways.


He goes on to share some of his beliefs vs. actual life contradictions that, in true Louis CK fashion, implicate us all in his hypocrisy.  For example, he shares a commonly-held belief that slavery is a terrible, awful thing. We can all agree with that, right? Then he points out that every single human achievement has basically been on the backs of slaves, from the pyramids to smart phones.  This, we're less comfortable with, and so we find ways to justify and explain it away.  The truth is, however, that we're lying to ourselves.  If you are reading this on a computer screen, you have benefitted from someone else working in slave-like conditions.  Yet, we are all against slavery.


"Bitch" didn't just reach the top of the charts because it's got a controversial title.  At least in part, it's because girls loved singing along with a song that embraced all the different sides of their little hearts.

I was too young to notice at the time, and too busy turning the volume down on the radio every time she said "bitch" so my parents wouldn't hear what I was listening to, but I wouldn't be surprised if this song was lauded by feminists of the day for embracing a complex, three-dimensional woman.  A woman who inhabits contradictions.  Who isn't a madonna or a whore - she's both, and more.

Then consider any character we consider well-written in books, films, or plays. They are always complex. They have beliefs or traits that don't let them sit snugly in any one box. They are innocent dames with sharp wits and tongues like fire. They are nerdy, painfully shy boys who are secret internet rock stars. Their bodies house contradictions and we LOVE them for it.

Yet we can't stand for it in our real-life celebrities. If you ask me, this is especially apparent with women. Look at every young pop princess' transformation from madonna to whore. Once they are sexually mature and don't want to be one-dimensional innocents anymore, they have no choice but to become one-dimensional fiery-eyed vixens.  We can handle the switch (with the necessary backlash, of course) so long as they stay consistent with their new image.

So here we are, living in a society that already places women under severe scrutiny with truly unrealistic standards, forcing them into boxes, and then what do we feminists do?  Hold each other to an even higher, more rigid standard.

Lena Dunham became a lightning rod of young feminism by refusing to give any cares about showing the world her body, both on-screen and in real life. She made a name for herself displaying "real" women on her show (a sampling that is, of course, still very select - all her characters on Girls are middle-to-upper class white women who enjoy bountiful sex and are somewhat artsy - not exactly representative).  She is also fiercely, unapologetically ambitious in a world that's still surprised by ambitious women. Great, great, great.

Why does all this mean that she's not allowed to house some contradictions?  Yes, she made a great statement by showing her body on Girls, but that statement is only undermined by her Vogue cover if you want it to be.

All this panic makes me wonder what would happen if she ever just straight up went on a diet.  What if she decided one day that she would feel healthier and better about herself if she lost weight or started dressing in more traditionally flattering clothes?  What then?  Would she still be allowed to to be a cool feminist who gives the finger to conventionality?

Maybe instead of holding her to a ridiculous standard based on the "feminist with a 'real body' who doesn't care what she looks like" box she's currently stuck in in, we could let her be an actual complex character.  A human woman who holds some contradictory desires and wants to try them out.  I'm pretty sure that "telling women what to do and how to think about themselves" would not make the Top 10 List of Goals for the Feminist Movement, so let's just all move on, shall we?
at January 26, 2014
Email ThisBlogThis!Share to TwitterShare to FacebookShare to Pinterest
Labels: happy feminism, Issues & Ideas, thinking things, What's Right is Right