Last week was a pretty significant time in my life. I had the BOOK LAUNCH PARTY for Feeling Better: A Field Guide to Liking Yourself! SAY WHA?????

The day was full of so many feelings, it's hard to wrap it up with one coherent thought, so here is a collection of thoughts instead:

Leading up to the party, I was feeling so keyed-up with energy and nerves that it was a pretty unpleasant sensation. I actually didn't know how to answer people when they would ask me how excited I was, because it wasn't what I normally feel in terms of excitement. It was the most nervous I have ever felt before an event. I really have no chill when it comes to this book.

Lucky me, I wound up meeting up with one friend early and she led me in a little body relaxation exercise that helped a lot!

Once I got there and people started showing up, it all washed into pure excitement! It was HAPPENING!

Confession: I have never been to a book launch party, so I don't know how they "normally" go. I really meant to go to a bunch in the fall while I was planning this one so that I would have a better idea of what it "should" be, but was never able to make it. I get the impression that I may have overdone it with other performances, but that's okay!

TMI confession: lately I have been transitioning back to all-natural deodorant. However, as I was preparing to leave the house I realized that, what with all the nerves I was experiencing, my sweat was going to be stinkier than usual. I used some conventional lemon-scented stuff to make sure I didn't stink out the place.

I wasn't sure about doing a book signing at first - it felt too fancy! But everyone was asking for it, and so I said FINE! It turned out to be a WONDERFUL idea, if for no other reason than that I got to interact with people on an individual level! It was so lovely to have a few moments to hug and chat with the people who came.

Somehow, I managed to not actually cry even once. I almost cried a couple of times while I was thanking people, because I accidentally looked at them in the crowd and THAT was way too real. This is a big deal, I cry a lot.

Ultimately, I left feeling (and still feel) so overwhelmingly grateful! I am not going to start trying to list people here, because it's everyone! Everyone who gave their time and energy to helping this book exist in the world, everyone who bought it and read it, everyone who gave me a virtual high five on facebook, everyone who showed up with their body at the launch, EVERYONE!

I will leave you on this pic of me having a thought (or is it a feeling?): 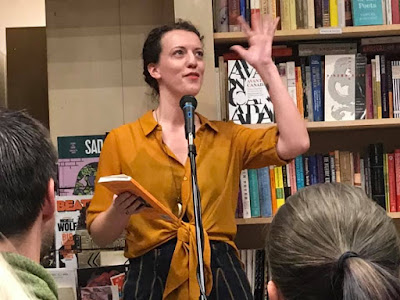 The Receptionist Delivers!
Sign up for my email newsletter for a weekly digest and bonus content!
at February 25, 2019
Email ThisBlogThis!Share to TwitterShare to FacebookShare to Pinterest
Labels: Feeling Better, Growth & Advice