Final Report: A month without photos

Last month I was inspired by this glorious woman to spend a month without taking photos. So now that month is over. What happened? What did this experiment reveal? 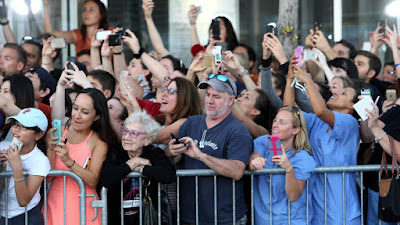 At first glance, not much.  I would often have the urge to take a photo of something, and then realize that nope, that's not what I'm doing right now. Sometimes it was a bit frustrating because there was something I really wanted to capture, but the frustration ended pretty quickly.

I can't even say that I felt more "engaged" in life. Moments were not more meaningful because I wasn't photographing them. I actually would argue that some moments might have been less meaningful. Looking at and framing something while photographing it forces you to take the time to interact with it even more. To consider it from more than one angle. To find the beauty in it.

Of course, it depends on where you are.  Being at an event, like the red carpet that inspired this whole thing to begin with, and spending the whole time trying to capture every moment and get the best photo (for what reason?  To prove you were there?  Show off that you were close to a celebrity?) does feel detrimental to the experience.

The closest I can come to that is when I'm at a concert or other such event.  If I spend the evening trying to get an awesome picture of Lady Gaga to show my friends later, I spend more time zooming and testing light on my camera and less time enjoying the concert I paid all my money to attend.

In my regular life this month, however, I didn't feel that.  Perhaps there's a difference between constantly trying to capture the perfect image of an event and capturing a moment.


The first photo I took after my photo ban.

Why take pictures at all?

Let's break it down!  There were two main things I noticed while I wasn't taking photos.  One was the things I wanted to photograph, and the other was what I wanted to do with them.

I wanted to take photos most often when I encountered something that I found either beautiful or hilarious in my day-to-day life.  Sometimes I also wanted to take pictures out of support for others: to Instagram the playbill for a show I was seeing to help that show spread word, for example.

In both instances, my urge to take photos went hand in hand with my desire to share them.  I don't think I ever just wanted to take a photo to have it to myself (although I used to take TONS of photos in the days before online sharing, so that may be a newer thing.)

Okay, I realize I'm making myself sound really altruistic here. "I just wanted to share photos to help other people, that's it, I swear!" No. Let's be honest. There is an element of wanting to show off the cool things I'm doing as well. To deny that would be silly. But is that my primary motivation? Let's follow the steps:

1) I encounter something that is beautiful/cool/interesting/funny.

The real motivations lie somewhere behind step number two. I want people to see it. Why?


A shot I took on vacation that I thought was both beautiful AND funny, but it only got four likes. Should I feel bad about it?

Angel in disguise. #artsyfarstybristol
A photo posted by Andrea Loewen (@andreaxuaxua) on Sep 29, 2015 at 8:13am PDT

Okay, let's rewind to pre-Instagram days. The days of printed photos kept in albums. We would share our photos back then, too - by hanging them on our wall and locker, gluing them to our binders, sitting down together and looking through albums, passing photos around a circle of friends one by one, and even those ridiculous post-vacation slideshows that were basically FORCING your friends to look at all your Facebook photos, but really slowly as you told stories about the different cool trees you saw in Hawaii.

Why did we do that? Was it to make our friends jealous? To show them our cool lives? To illicit a positive response from them? To simply share our experiences and joys with them?

I'm going to say all of the above.

When we showed our friends the mini-album of photos we'd taken at summer camp in 1994, of course we wanted them to "like" them. We wanted them to see and appreciate our experiences and to express some kind of reaction (laughter, amazement, interest, maybe even disgust or horror) to what we were showing them. We wanted to feel like they were there by proxy, so they could understand this thing we saw or experienced and be a part of it, in some way. It's what sharing our lives with each other boils down to, right? Sharing experiences.

Did we also want them to be jealous of our cool lives? Sometimes, probably. Maybe that totally depended on how satisfied we were with our own lives in comparison to the person we were sharing photos with. If we felt kind of insecure around them, then yeah, we probably did want them to think we were cool and be a little jealous.  Then maybe we would "craft our image" a little more by only showing them certain photos where we looked amazing and were doing super cool things.  The photo taken right after we woke up and tripped over our underwear getting out of bed might have been tucked to the back of the pile for those people.

So posting photos online is, naturally, an extension of that. We share parts of our lives and experiences with each other because we want our friends and loved ones to be a part of them. We want them to know what's happening in our lives, to do a mini time-travel and stand next to us as we saw that cool thing and say "that is awesome!" with us.  To be a part of the laughter, joy, and amazement we experience.


Here's a time I was at an event and spent too much time trying to take photos. I got a shot of Elizabeth May (the best Canadian politician of all time) at the pride parade. It's very exciting, but probably took away from my experience of the event. Although I did just get a thrill looking at it again.

I see three big differences that have shifted things from the day of the photo album to the wall post.

One: we can post photos of every single little freaking thing that we do.  We don't have to economize photos to save film.  We don't have to get things printed.  We don't even have to take the time to plug our digital camera into our computer and upload shots.  We just snap and hit three or four buttons to share.  This ease creates an insane volume of photos for some people, and that sense of oversharing.

Two: we can now quantify the response that would have been only qualifiable in the past.  When I showed my friend photos from my family vacation to Florida in high school, we experienced the photos together.  I told them the stories in person.  We laughed together, they smiled and expressed interest and did all those other things that people do while sharing a moment, and they did them together with me.  Now all we have to go off of in the sharing of experience is the number of likes and comments our photos get (and maybe evaluating who the people are that are doing the liking and commenting).  It's taken our natural desire to share in each others' lives and made it into something you can count and compare.  Comparison, as we know, is death.

Three: because we are sharing with everybody we know (and maybe don't know) and can count and compare how people are responding to our photos versus other peoples', our insecurities are going to shine through more than ever.  Now those "cool kids" that we feel the need to look our best in front of are all mixed in with everyone else.  Unless we're really on top of our share settings or have very private profiles, the people who make us feel insecure could be seeing everything.  Suddenly it matters a lot more what kind of image you're putting out there and you might feel like you can't just be yourself.

I'm going to guess that everyone has a different pitfall that will drag them down the most.  Personally, I think mine is the second.  I want to share photos because I want to share moments, but the only way I know that someone has experienced that moment is if they've done something to show it - something I can count.  Something I can, despite myself, compare to my friends who are cooler or more popular or better photographers or whatever.  This is dangerous!


Here's a shot I took that was pure brag: screenshotting my email inbox with zero emails left and straight up gloating about it. I definitely was aiming for jealousy. Although I just noticed the typo in my caption and now feel shame.

Win! Now nobody email me ever. #inboxzero #adminwin #howlingwillitlast
A photo posted by Andrea Loewen (@andreaxuaxua) on Jul 15, 2015 at 2:53pm PDT

What about the bad?

There is one more factor in this equation, and that is the fact that people have never been in the habit of photographing the bad parts of life.  I would argue, if anything, that digital photography and ease of sharing has actually increased the likelihood that people will share something less flattering.  Back in the day, do you think we'd waste a square of film on a bad moment?  Of course not.  At least with the economy of digital, it doesn't cost anything, and with the volume of shots out there, each individual picture has less weight.

At the end of the day, it's not like photo taking is going anywhere.  It's just going to get easier to share more and more of our lives, and this isn't necessarily a bad thing.  What I learned this month is that I just need to be aware of the context where I'm taking a million pictures: am I leaning into or away from the moment I am experiencing?  There is nothing wrong with trying to get the "perfect shot", but is it taking away from life right now?

When it comes to sharing, I don't know what to do about that.  I think sharing is great and healthy and wonderful, but counting likes and comparing lives is poison.  How to do one without the other?  Got any ideas?
at November 05, 2015
Email ThisBlogThis!Share to TwitterShare to FacebookShare to Pinterest
Labels: challenge accepted, Growth & Advice