Canadian Politics Bonus: Why it matters to appoint a Cabinet with gender balance (Elizabeth May's perspective)

Last week Canada's new Prime Minister Justin Trudeau announced the Cabinet Ministers.  For you non-Canadians out there, basically, each elected representative is a minister in the House of Commons, where government happens.  There are a handful of ministers (in the governing party) who get to be Cabinet Ministers.  They are special because they are in charge of portfolios like Defence and the Environment and Scientific Research and Health Care.  They don't call the shots, but they make sure things get discussed and bills proposed and all that jazz.  It's kind of important to have good Cabinet Ministers.  Cabinet Ministers are also appointed, not elected.

When Trudeau was elected he said he would make a gender-balanced Cabinet.  Immediately people got all "what about merit?  Shouldn't people earn the position?"

I would say more on that, but Elizabeth May wrote a wonderful article that she sent out in her newsletter the day before the Cabinet was announced that sums up all the best arguments on the situation.  Take it away, Elizabeth!

Why it matters to appoint a Cabinet with gender balance
November 4, 2015

I don’t know about you, but I have been astonished at the many media pundits who question Justin Trudeau’s decision to appoint a Cabinet with gender parity. The CBC panel on November 1 with Walrus editor Jonathan Kay was a real low point. Suddenly a hue and cry is raised that having 50% women will entail incompetent appointments. Kay even kidded that it was unfair to his “people.” It reminded me of the Parks and Recreation episode where men rallied for their rights crying out “we have not been treated fairly -- really recently.”

I do not recall anyone questioning the merits of male ministers being appointed as the vast majority of cabinets – forever. Were all those stellar choices under Stephen Harper (Julian Fantino, Vic Toews, and Pierre Poilievre to name a few) just so unquestionably well-prepared for the job that the matter never came up? Or is it beyond obvious that questions of merit never surfaced when the expected men were put in their usual spots – known as positions of power?

The satirical publication, The Beaverton, skewered the response in a brilliant little column: “50% female cabinet appointments lead to 5000% increase in guys who suddenly care about merit in cabinet.”

With Prime Minister designate Justin Trudeau preparing to announce a cabinet that is 50% women, researchers have discovered a sharp 5000% increase in the number of men who suddenly have strong opinions about how cabinet appointments should be a “meritocracy.”

Across the nation statisticians are at a loss to explain a recent and drastic jump in the number of men who have spontaneously developed hard opinions about the qualifications of Federal Cabinet Ministers.

“This is affirmative action, and even though it has been statistically shown to improve working conditions over time, I don’t like it,” said longtime man Thomas Fielding.

Several noted political scientists agree that Trudeau’s female quota is a controversial move. “I suddenly and inexplicably find myself very concerned about this issue,” added Dr. William Harkin of the University of Calgary, also a lifelong male. “Unlike Trudeau, Prime Minister Harper only chose the most qualified people for his cabinet posts, like a climate change denier [Peter Kent] as his Minister of the Environment. Or his numerous Ministers of Defense who never once held military positions.”

I write this on the eve of the unveiling of the new Cabinet, so cannot offer any opinion on the individual choices of ministers, but I believe this move to be one of the most significant actions for equality of women since we got the vote.

My enthusiasm largely stems from knowing how much a gender-balanced cabinet changed – for decades – the political role of women in Norway. The first woman prime minister of Norway, Gro Harlem Bruntdland, may be best known to Island Tides readers for her chairing of the World Commission on Environment and Development. The landmark report “Our Common Future” is often just known as the “Brundtland report.” It was in that period that I had the great honour of working with her. She also made dramatic changes to Norwegian society when she appointed 40% women to her government in 1986. It was not an easy move to make. One of my friends who worked most closely with Gro Brundtland said she had to consciously sacrifice a generation of strong male leaders to take a meaningful step for women’s rights.

Today in Norway, the government still reflects gender parity. And the move to equal rights did not stop there. Norwegian women are by law 40% of corporate board rooms both in government-run enterprises and in the private sector.

Women in positions of power change a society. Gender roles and expectations shift in profound ways. One of my favourite anecdotes demonstrating this reality also relates to Prime Minister Brundtland. When she stepped down after many years in office, a Norwegian friend’s little girl was watching the news about the leadership contest to replace Brundtland. Several men and women were running for the post. Her daughter was startled and asked her mother, “You mean, a man could actually be a prime minister?”

Oh, for the day a little Canadian girl can ask that question.

This article was originally written for publication in Island Tides.

Finally, let's look at the pictures: 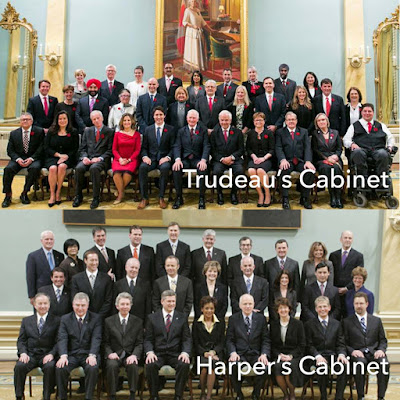 Which group seems better qualified to run a country like Canada?
at November 08, 2015
Email ThisBlogThis!Share to TwitterShare to FacebookShare to Pinterest