Learning! One More Reason to Get a Move On (and that reason is twins) 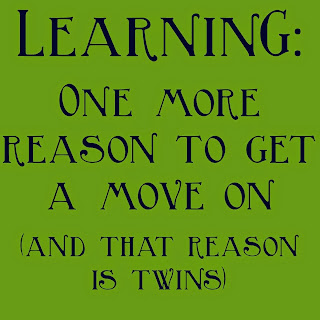 Get ready for another study to make you feel really bad about the fact that you're currently lying on the couch, skimming through this post on your phone while Netflixing the entire season of The Unbreakable Kimmie Schmidt and polishing off some delicious Honey Dijon Kettle Chips! And this one is a TWIN STUDY.  Twin studies are pretty much the holy grail of studies on humans, because they help control for the whole genetics vs. everything else debate.

So in this study, Finnish researchers busted their butts to find identical twins who had divergent exercise habits.  One twin exercises, and one twin doesn't.  Interestingly, both seemed to have similar diets, and obviously had the same genes.

What were the differences between them?

Brains: more exercise meant more grey matter, which is a good thing to have. More grey matter means more synaptic connections, among other things. Those are good to have too.

These differences didn't take all that long to emerge either.  Just a few years, they figure, of not exercising and your body and mind basically start to fall to pieces.

Source.
at May 15, 2015
Email ThisBlogThis!Share to TwitterShare to FacebookShare to Pinterest
Labels: *Learn! Fridays, Growth & Advice, healthiness, Help Yourself