Inspiration! You might be getting it right (according to Neil Gaiman) 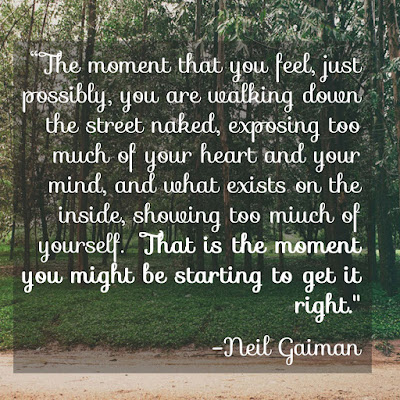 I just launched a podcast two days ago.  Using official-sounding terms like "launched" makes it feel like it's not such a personal thing, but really, it's a really personal thing!  I co-created a podcast with my friend Joel, and we put it out into the world and are basically saying, "hey guys, here are a bunch of things that we want to talk about that are really important to us as people, and we are cocky enough to not be satisfied talking about it among our friends.  We need to broadcast it out into the world and make you listen to it."  Ugh.  Scary.

So yesterday when I came across this Neil Gaiman quote, it was a helpful reminder.  When you get an idea, get all excited about it, and then partway through start to feel like it's too much and too scary and too exposing and you just want to decide to not actually do it, that's when you maybe are doing something good.

It's important to remember the "maybe" as well (or Neil Gaiman's "might be starting").  Just because you are exposing yourself and vulnerable doesn't mean what you're doing is the thing it should be (or needs to be).  Just because your work reveals your soul doesn't mean it's complete.  Creating something worthwhile takes vulnerability and openness, but also crafting and shaping and cutting and perspective.  Feeling far too naked is not the whole picture, but it's a necessary step.