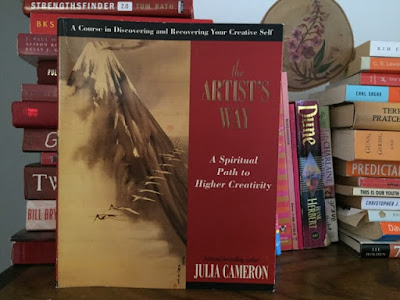 Catching up, you guys!  Don't worry, I haven't given up on The Artist's Way (because I know you're all super invested in my artistic development).  Here is my rundown from weeks seven and eight.

The theme of week seven is recovering a sense of connection.  It's about getting back in touch with your personal creative dreams and drive.  There are some great bits in this one: one is the notion that creating art isn't about thinking something up but "getting something down."  This really connects with me as I often feel I am finding something that already exists when I make something.  Not to even come close to comparing myself with Michelangelo, but he said the same thing about carving the Statue of David - that he found the shape inside the stone. 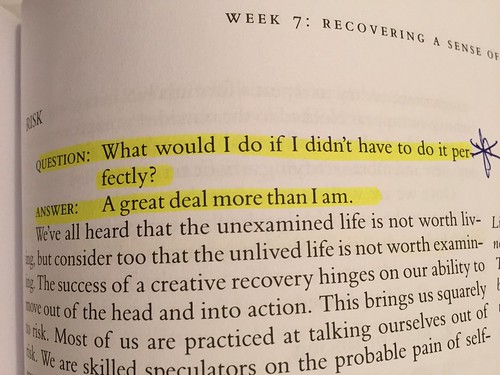 There is also significant emphasis here on letting go of perfectionism.  I already blogged about it a bit, because it really struck me as one of the most important ideas I can embrace right now.  What would you do if you didn't have to do it perfectly?  List as many things as you can think of.

Jealousy also gets some special attention here.  This is another one that hit right where I was already thinking and knocked that nail in all the way: jealous, while being an unpleasant feeling we may want to ignore, is also useful information.  It is a mask for our fears and feelings of inadequacy. 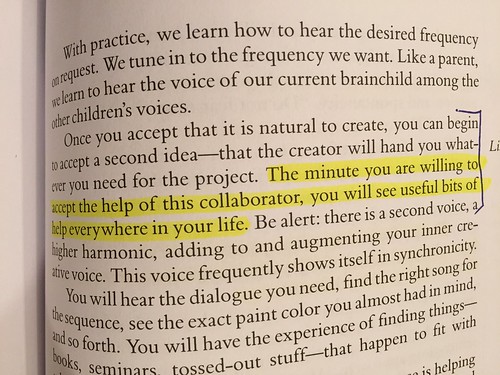 Next time you feel jealous, ask yourself why.  What do you need to be doing that you're not?  There is a great exercise here called a jealousy map.  It's simply a list with three columns: Who, Why, and Action Antidote.  Who are you jealous of, why are you jealous of them, and how can you meet that with action?  What steps can you take in your own life to deal with that root cause of your jealousy?  It usually boils down to actually starting to work on something you've been wanting to work on.

The theme of week eight is recovering a sense of strength.  At first the title seems a bit erroneous to me, because it's mostly about dealing with the creative block of time.  So, pretty much, the exact practical thing that I need to deal with in my life. 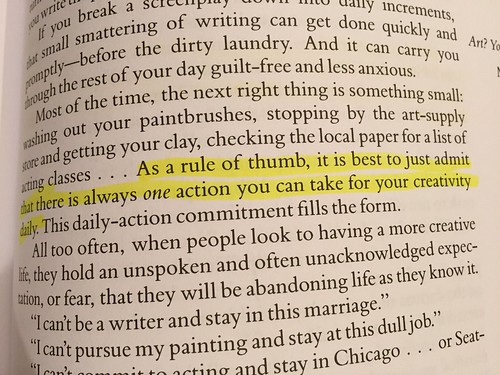 However, making time for the things you really want to do and taking the risk to do it takes a fair amount of strength.  Creating means exposing yourself and taking a lot of losses (or at the very least risking them).  In this chapter Julia Cameron deals with how to create some resilience to those losses (recognizing your artistic wounds and metabolizing that pain into artistic energy, for example).

The antidote is to keep doing.  To take steps.  To remember that it's not just about having written a book but to enjoy the process of writing the book.  That taking steps towards a goal is an enjoyable thing to do.  So make a goal and figure out what steps you can take towards it every single day.  She calls this process of taking small steps instead of focusing on the big picture "filling the form".  Instead of fantasizing about being a real artist or panicking over the sacrifices you'll have to make when you are successful, find little steps you can take here or there to put that art into your life. 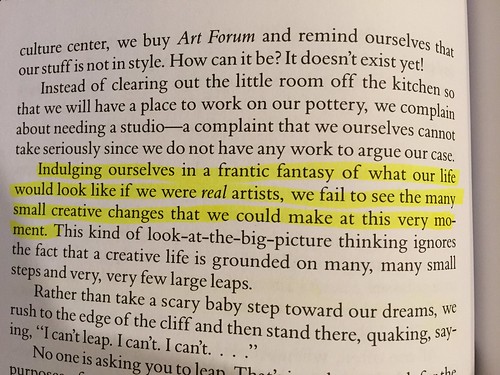 I appreciate this chapter so very very much.  It's so easy to get caught up in the hugeness of something you want to do instead of just taking some steps towards doing it and enjoying those steps.  I have done a good job in the past year of carving out time to work on things, but have let myself flounder in the direction I'm going with that work.  I write every day, but rarely work on the larger projects that I truly want to complete.  This reminds me to just create a plan and work on it bit by bit. Of course, now creating the plan has become the "bigger thing" that I think about and then don't do, but I will work on that plan as SOON as I finish writing this post!  I promise!
at April 07, 2016
Email ThisBlogThis!Share to TwitterShare to FacebookShare to Pinterest
Labels: challenge accepted, Growth & Advice, the artist's way