You know how women be all like "there aren't enough women represented in movies!" and then someone says "but what about Frozen or Sex and the City?" and then everyone else is like, "those are two examples, so we can no longer argue the point."

Well, if you're tuned into gender issues you've probably already seen this make the rounds online, but I like to share things well after they've been popular just in case someone else is as behind the curve as I am.  Over at Polygraph, an amazing website where they find data to do with various pop culture phenomenon (data and pop culture!  Fun!), they did a study of 2,000 films to actually quantify the amount of dialogue women get, as well as the ages of the characters represented.

What did they find?  Well, let's let the graphs do the talking:

First, they analyzed Disney films. I don't know why they picked Disney specifically, perhaps it was just easy to find those screenplays. Whatever their reasons, I think it's important to look at what stories we are telling our children, as that will shape the way they see the world from the start.

I also find it FASCINATING that the story that got us all excited about a feminist movie for kids (Frozen) actually had less female dialogue than male. 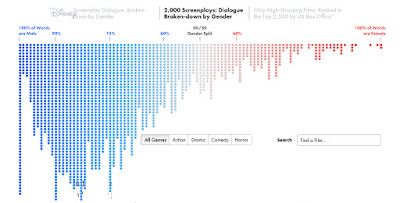 This one is all 2,000 movies that they could find scripts for that matched well with IMDB pages.  Each dot represents a film.  If you go to their page, you can hover over the dots to find out what they are, as well as sort by genre and search for specific movies to find out where they lie.  Fun fact: Now and Then, which I super-loved, is one of the two films with all-female dialogue.

Finally, you can look at the top-grossing movies and pick specific ones to delve into further. There are the movies you expect to be bereft of women (Ocean's 11, Rocky), and then ones where you don't know where they'll fall. I love Wes Anderson movies, so I checked out The Royal Tenenbaums.  Turns out that 79% of the dialogue in this ensemble-cast movie is spoken by men.  The vast majority of that comes from Royal himself, followed by the male narrator.  Two out of the five characters with the most words spoken are women.

Now, once we start looking at individual movies, it's easy to justify the imbalance: so that particular movie had a male narrator, isn't that okay?  The story is about a dad who calls his children back together because he is dying, so it makes sense that he would talk a lot, doesn't it?  Isn't that okay?  Can't we tell stories about dying dads and have male narrators sometimes?  Of course we can.  Dying dads will always be an important part of filmic storytelling.  As long as Morgan Freeman is alive, we will have male narration of cinema.

What this shows us, in pretty stark, quantifiable terms, however, is that it's not just one movie about a dying dad with a male narrator.  The Royal Tenenbaums isn't the problem.  Neither, really, is Ocean's 11 or Rocky or Glengarry Glen Ross or Reservoir Dogs.  It's the pattern.  It's a really really big, really significant pattern.  And now, we have some numbers to show for it.

Could we use more numbers?  Yes.  It would be awesome to have stats on things like screen time, what perspective the story is told through, amount of clothes worn, as well as which characters are active or passive.  But heck, it's a start!