Some of you may know that Ryan is quite the musician. He had (has?) a sweet band called Dead Man's Bones. Well, you probably don't know that I play the guitar too! Just in more of a "sort of" kind of way. Here Ryan was trying to get me to play one of his songs, but I was just goofing off instead. He was a bit annoyed, but ultimately he agreed that my songs are way better than his. What a classy guy, my Ry Ry! 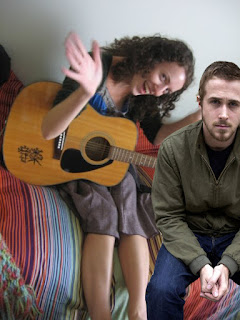 at December 03, 2015
Email ThisBlogThis!Share to TwitterShare to FacebookShare to Pinterest
Labels: me and ryan gosling, Projects, ryan gosling, Whimsy