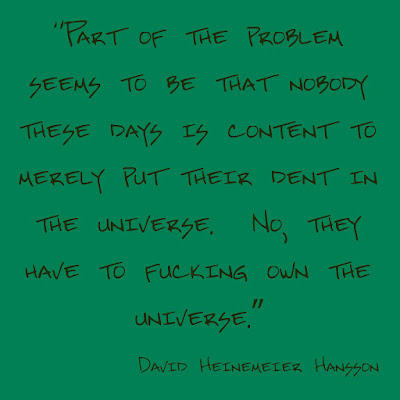 "Part of the problem seems to be that nobody these days is content to merely put their dent in the universe. No, they have to fucking own the universe.”
David Heinemeier Hansson


THANK YOU! This is what I've been trying to say, well, basically since I finally got over the idea of owning the universe.  What is all this pressure that we are supposed to be putting on our lives?

Remember, everyone can't own the universe, but if we content ourselves to make our own dents then we actually allow everyone else the power to make their own!  So let's do it!  Dent the world!

PS: Did anyone else see the movie Death to Smoochy back in the day?  Remember how Smoochy's answering machine said "you may not be able to change the world, but you can make a dent", and it was something we were supposed to kind of make fun of, but actually it was good advice?
at December 30, 2015
Email ThisBlogThis!Share to TwitterShare to FacebookShare to Pinterest
Labels: *Inspiration! Wednesdays, Art & Inspiration, quotes, the greater good, thinking things