Inspiration! Dame Judi Dench Might As Well Be a Queen and Here Is Her Advice to 30 Year Olds 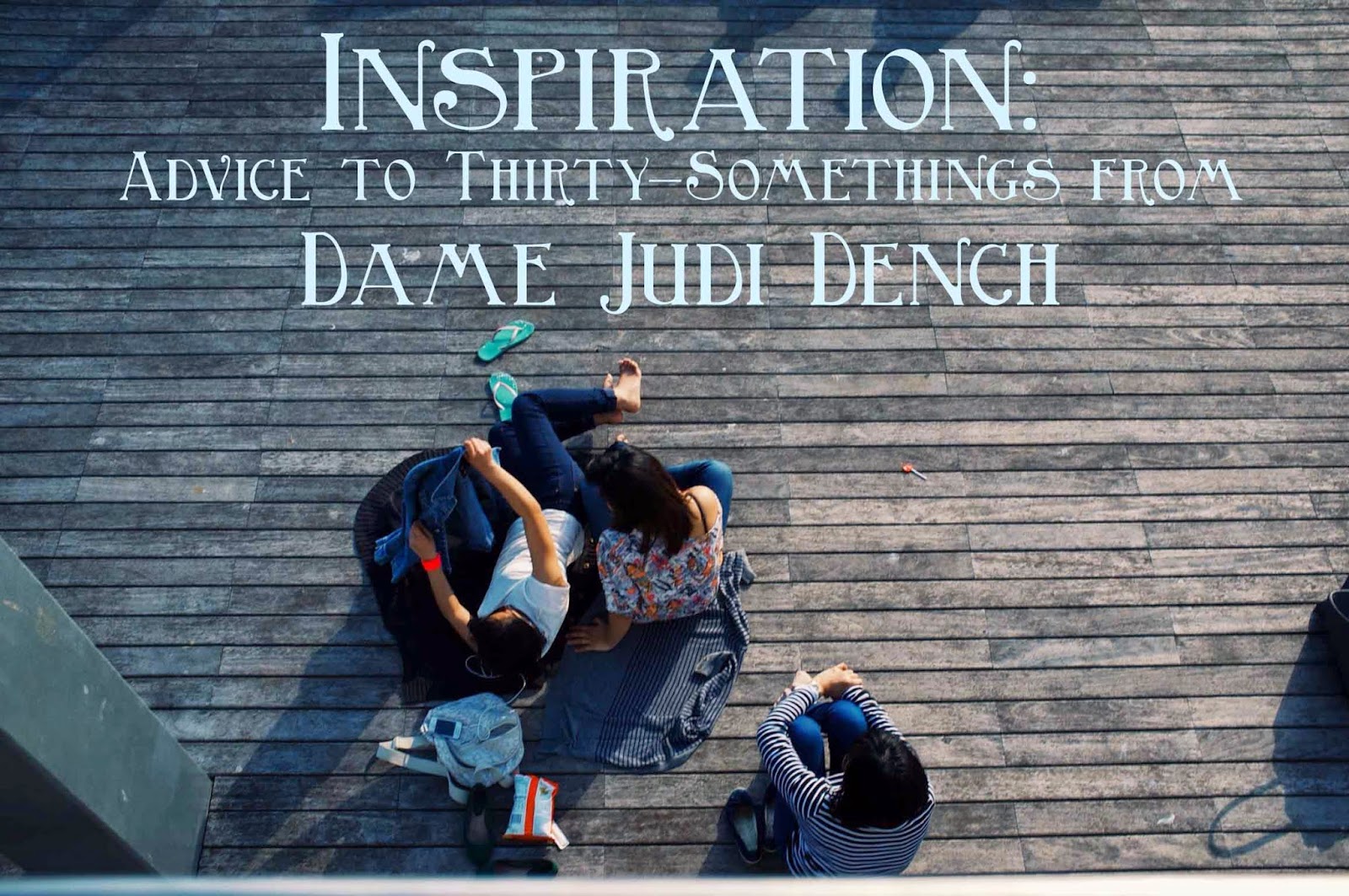 This article is, by internet standards, totally stale: on Feb 25th, Stylist published an interview with Dame Judi Dench where she gave advice to her 30 year old self. I bookmarked it on Facebook (where it was making the rounds) and then forgot because how often do you actually go back and look at your saved articles? (Answer: somewhat often because I use that to save things I might want to post about here, but still, not that often.)

Being that I am now 30, and I actually looked at my saved articles, I decided to read the article and glean my own little bits of inspiration from it.

First of all, it's hilarious in its honesty. On ageing and wisdom she says,


"Nothing is good about ageing. Nothing. Everyone looks at you and thinks, ‘Oh hello, so you're about to drop off the bough….' But I hate the thought of [death]. People say to me, ‘Oh but think of the great wealth of things you've learnt'. Actually, I'd rather be younger and dumber."

How fun is that? It's nice to not have to pretend that ageing and my body falling apart is going to be fun and adventurous. I feel like I'm already getting old - I used to be able to get hardly any sleep for weeks on end with no repercussions (or so I thought, I'm sure my friends would tell you my mood suffered), work on a thousand projects at once, and say yes to every single opportunity that came my way. Now I can't. But I can still do a lot more than I'll be able to do in 20 years, and then in 20 more, so perhaps I should enjoy it and drink out of more chocolate fountains. (This weekend I drank straight out of a chocolate fountain. It was awesome.)

Here is one of my favourite things that she said, though, on not letting the obstacles of ageing get in the way:


“I'm a great advocate for not sitting back. I never think, ‘Oh my eyesight's bad, I can't possibly do this' [Dench suffers from macular degeneration]. I just want to learn new things all the time. I like to play a lot of games; Bananagrams, Categories and I do that thing where you open the dictionary every morning and learn five new words. Iíve just started to learn how to carve objects out of soapstone – birds and things. I'm absolutely hopeless at cooking, too so I'm considering taking some kind of course. I think it's very important to keep learning.”

Isn't that AWESOME? I distinctly remember talking to my grandpa, an amazing man, when he was in his early 80's. His life story had always inspired me and I mentioned something about him writing it all down. He brushed it off, saying that he was too old to start something like that. It broke my heart. My grandpa, who had accomplished so much, who had been born with canons shooting over his home and escaped war and inspired a city full of students, thought he was too old to write his story? How could someone who'd done so much suddenly give up?

But that happens to so many people with age - all of a sudden it feels like too much work, too big a task, like there's not enough time to finish it. Well, I might die before I finish writing this blog post (although if you're reading it, I'm probably alive), so dang it, you still have to start things!

Side note, I love how this movie star talks about playing games like Bananagrams to stay sharp. Isn't that just not what you would expect and wonderful? I feel like stars are always trying to make massive undertakings seem effortless and fun, so it makes me and my regular life seem so much better to see that Judi Dench is memorizing Dictionary words and playing tile games to keep active.