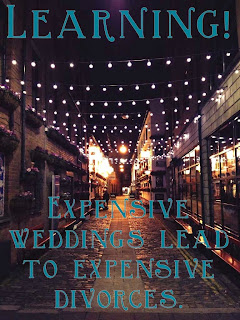 I have two very close friends getting married this year which means, among other things, that I get to help throw them some big pre-wedding parties and that marriage-related things are on my brain.

Add to this our current era of wedding reality shows where people spend $10,000 on weird Moulin Rouge-style wedding dresses and the number of elaborate engagement videos that have gone viral on YouTube, I have often wondered about the relationship between the flashiness of one's engagement or wedding and future marital bliss.

If you had an expensive wedding already, don't worry! This is a correlational study, and as every psych professor I had through university made me repeat "correlation does not equal causation." This is merely a relationship between two events that could be caused by any number of things. Like, for example, the possibility that some people who spend a lot on their weddings are doing so to cover up insecurities they have about their relationship. Or the fact that you are more likely to find a person who cares more about appearances than following their heart spending extra money on a lavish affair. Or maybe it's that people who spend hardly anything on their weddings are able to focus more on the promises they are making to each other because they don't have the opportunity to get caught up in other details. Or maybe they have already weathered difficult financial situations together whereas wealthier newlyweds haven't had to yet.

Don't worry. You, as an individual, are not necessarily going to get a divorce. (Although, of course, I don't know anything about you or your relationship. You might be doomed.)