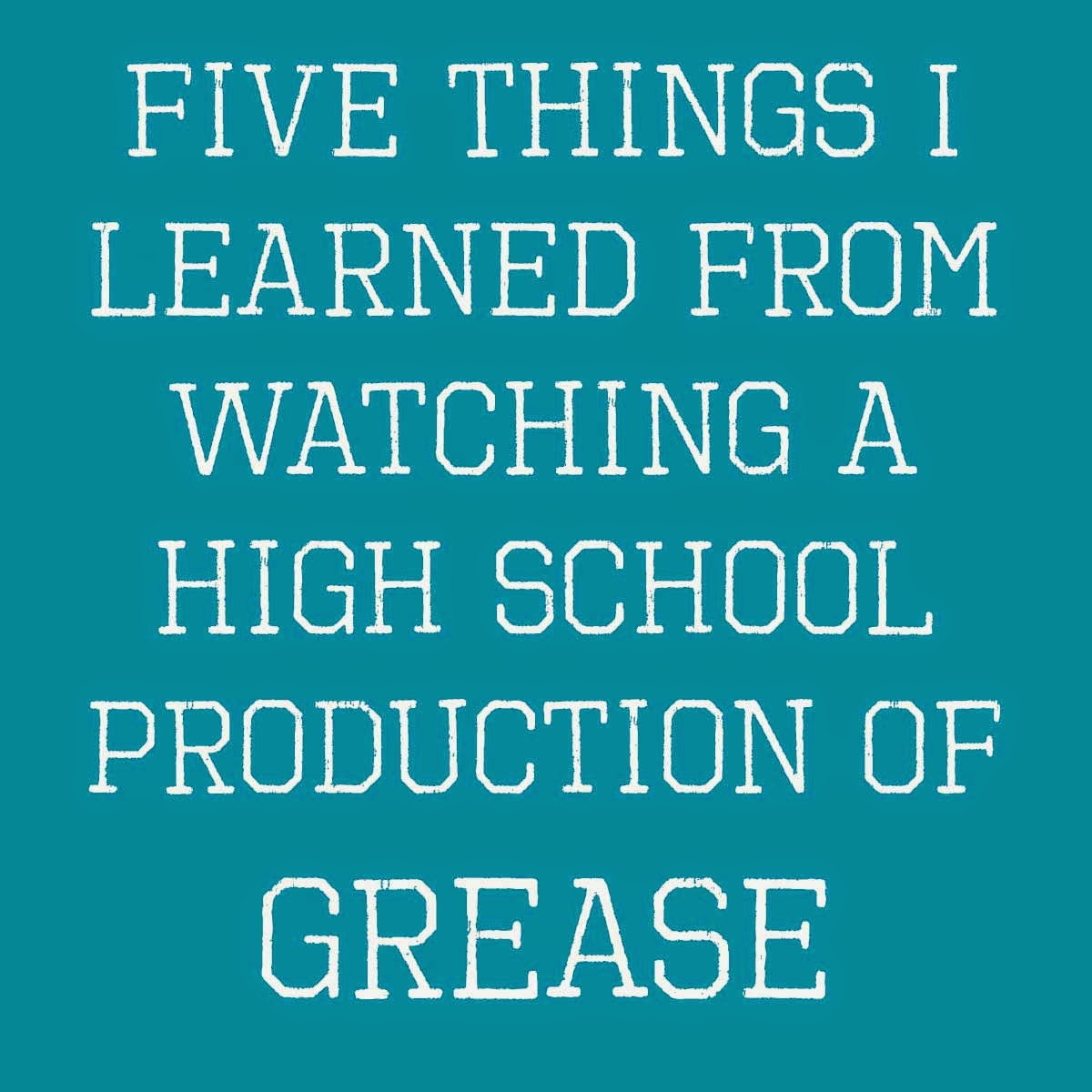 Last weekend I went to go see a high school production of Grease.  Why did I do that, you ask?  I participate in a mentorship program, and the girl I was mentoring last year is a part of the production and invited me.  I was thrilled to see her again and support her work and figured hey, how bad could it be watching teenagers sing about getting busy in the sand and changing themselves to find boyfriends?

In his director's notes, the drama teacher tried to make the case that this show is more of a parody/commentary on high school politics and teen stereotypes, but I'll be honest: I am pretty sure that he was trying to justify the fact that he needed a show with teenaged characters and a lot of roles for his students.

Here's what I learned from the experience:

1) Watching teenagers perform is adorable with a touch of unfortunate.

I know I'm getting old when I see high school students giving their all on stage and just want to hug them and pinch their cheeks.  They were so RIDICULOUSLY cute!  Many were very good singers.  And this one kid wrote the funniest, cutest bio I've ever seen, so much so that I instagrammed it.

The touch of unfortunate came when I quickly realized how the girls were far more self-conscious on stage than the boys.  The boys would pose, preen, dance, and play their roles with gusto.  They also rocked some falsetto moments in a major way.  One notable exception aside, however, the girls barely committed to their poses, blocking, and dance moves.  It was obvious watching them that they didn't think they were too cool for school - it was fear holding them back.  Probably fear of being judged.

This fact made me sad.  Girls of the world!  Don't be afraid to give something your all!  Everything is much better when you do!

Some oddities aside, the costuming was really impressive (why there were two girls dressed like 1920's flappers at a sock hop I'll never understand).  However, these are teenagers on stage.  I know Frenchie wore a little nightie in the sleepover scene in the movie, you have creative license on stage and did she really have to be wearing that little silky thing?  And Cha Cha didn't even have that much cleavage in the movie.  My date and I both felt very weird about this.

The story of Grease is questionable in general, but at least when you watch the movie, the actors are actually adults, so you kind of separate yourself from the fact that the characters are actually 17 years old.  Watching actual teenagers smoke, drink, wear negligees on stage, have pregnancy scares, dance lewdly, and transform into sexpots right before your eyes, on the other hand, is kind of creepy.

3) The stage version of Grease doesn't even make any sense.

There are so many non-starters in the stage version of Grease that I'm pretty sure it only makes sense if you have seen the movie and are okay with ignoring a lot of random details.  Like the fact that Danny joins the track team because Sandy said she doesn't think he could and then immediately dates the cheerleader girl (who told Sandy he wasn't good enough for her but then acts all in love with him later).  Then he quits the track team in one practice when the coach asks him to get a haircut but at no time does he do anything to leverage this to impress Sandy, which I think it's supposed to be all about.

The cheerleader in question also seems super proper at first, then she makes fun of Sandy for being too goody-goody, and then later says she has something "really important" to talk to Danny about that made me think that she, like Rizzo, was pregnant, but we never actually find out either way.

Also, Danny is supposed to be embarrassed to see Sandy at first because she is a "good girl" and he's got a "bad boy" image to maintain, but then he goes to the dance with the cheerleader who is also a super "good girl"?  Except that maybe she's not, because maybe he got her pregnant????  While he was supposed to actually be in love with Sandy???

Back to Sandy, in the stage version it's Rizzo's "There Are Worst Things I Could Do" solo that inspires her to become a hubba-hubba-bad-girl.  This basically means that she sees her friend have a pregnancy scare and then thinks, "yep, I'll start acting more like her."

There is a brief mention that the DJ who hosts their high school dance tried to roofie Frenchie.  She says, off-handedly, that she thought was a good guy and then saw him putting an "aspirin" in her Coke.  Okay, so good that she recognized that good guys don't do that, and that she saw it happen and then got away, but DANG if that isn't a big bomb to drop as a tiny aside, as if it's a normal thing.

Back to Danny and the track team - he ditches his friend in a rumble (that never actually happens) for track practice, but then you later find out that he ditched out on track practice too (it was the terrible haircut incident).  WHERE DID HE GO???  Why would he leave practice and not go to his friends?  We know he wasn't with Sandy because she's still sad about him.  Also, the pre-rumble-that-never-happened scene made me wonder if I was watching The Outsiders for a moment.

Finally, at the movies Danny basically tries to molest Sandy and then when she runs away he sings "Stranded at the Drive In" and we are supposed to feel bad for him?


4) The message of Grease goes the wrong way.

Of course, we already knew that the heart of Grease is the worst, because of the whole "change yourself to get a sex-partner" thing, but the character arcs are actually backwards from what one might expect.

Usually in a comedy, the character goes through some kind of redemption - they go from being a jerk/workaholic/sleaze/generally-not-great-person into a nicer, kinder, more compassionate human.  Generally they also get a sex-partner to fall in love with them was a part of that transformation.

Now let's look at the character arcs in Grease:

Sandy starts off a super good girl in every way.  Not only does she abstain from drinking, sex, drugs, and smoking, but she is also kind and doesn't judge anyone else for their choices.  She has compassion for Rizzo's pregnancy fears, even though Rizzo is 100% mean to her from the start.  She sticks to her principles in the Drive-In.  Then she suddenly decides to change and starts smoking and implies that she will probably have sex now, or at least let Danny touch her boobs.  So her transformation is the reverse of what one might expect.

Then there's Danny.  It is implied that Danny was his best self during the summer romance with Sandy that happens just before the play starts.  We meet him, however, when he's back to being "Cool Boy Danny", the Greaser's favourite guy, always ready to make a penis-related joke or get in a fight.  His big struggle is that he wants to be with Sandy but doesn't want to ruin his image.  One might expect that he would transform into a good, sensitive, caring guy, and that would be the story.

Instead, Danny makes the week-long sacrifice of joining track to show Sandy he can be more than a thug and then quickly quits and goes back to being a thug.  Then he gives her his ring and expects sex in return, but that's okay because Sandy got away and slammed the door on his junk.  Then he basically gets everything he wants: Sandy changes for him and so he can maintain his image AND get to at least touch Sandy's boobies!  Go Danny!  You win!  You don't need to be redeemed!

The rest of the characters basically have zero storyline at all, except maybe Rizzo, who has the closest thing to the redemptive storyline: after her pregnancy scare she seems to actually starts letting Kenickie into her heart in a real way instead of acting like she doesn't care about him.  Go Rizzo!

5) There are also a lot of fat jokes!

Adding to the "Just the Worst"-ness of this story, Jan, one of the Pink Ladies, is pretty much there to be the butt of a bunch of fat jokes.  She is slightly larger than the rest of the girls (in this case the actress appeared to be wearing a small amount of padding to avoid making fun of a girl's actual size being larger-than-tiny) and the funny thing about her is that she is ALWAYS EATING!  Hilarious!