6 Things I Learned About Humanity from Living With Roommates 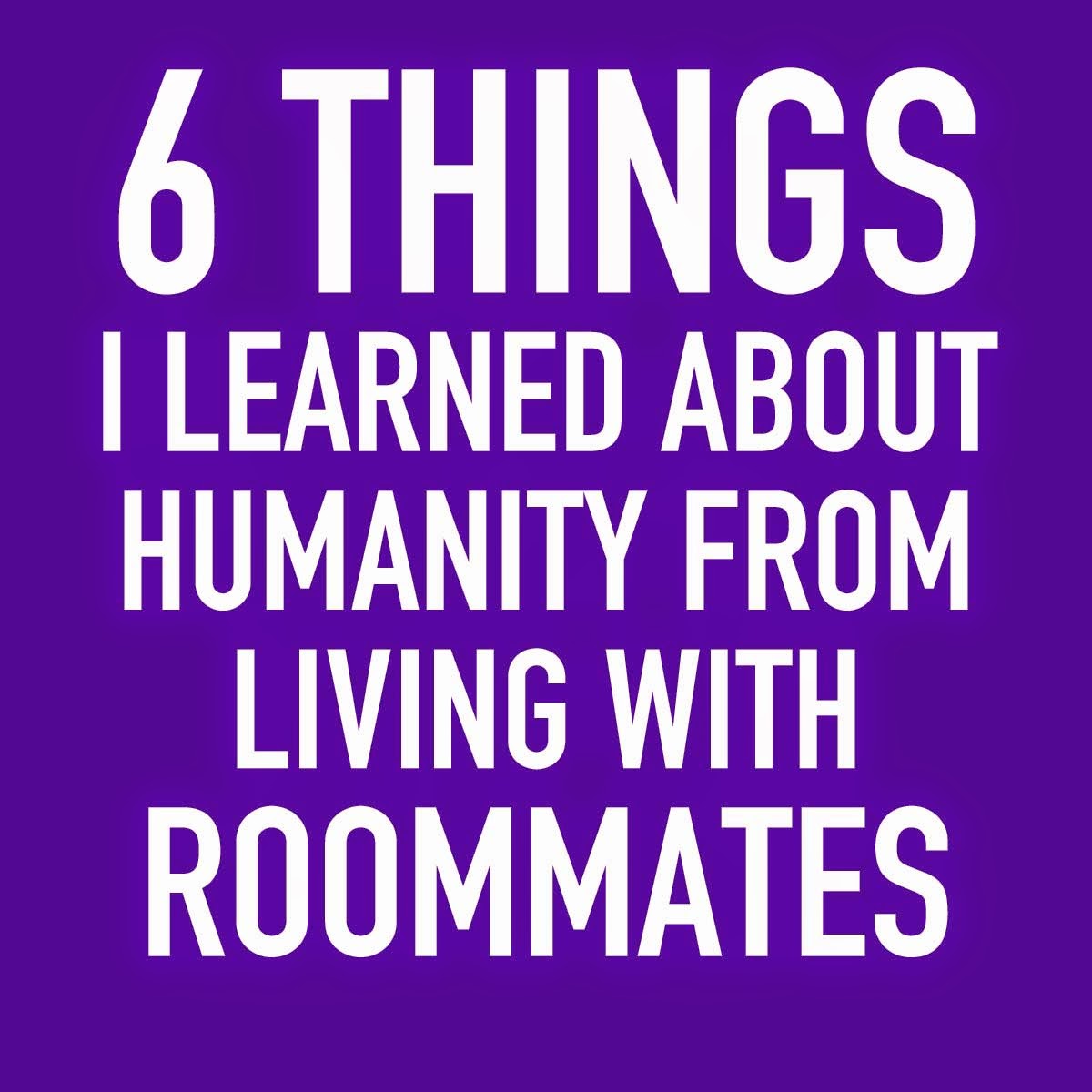 I have had a LOT of roommates over the years.  In fact, I just tried to count them and quickly determined that there are enough that it's too much work.  To ballpark it, I have lived in eight different places since leaving my parents' home, six of which included probably 10-15 different roommates.  A few of those had repeat appearances, one even returned after getting married (her husband came too.)  Hopefully this significant turnover was not because I'm a horrible person - everyone had pretty legit excuses for needing to move out.

Now that I've been living alone for a little while (a situation that has a few notable down sides, but is primarily excellent), I have been able to reflect on the humanity I observed and the lessons I learned from living with so many different people.  Lessons I will now humbly offer to the face of your computer screen for your evaluation.

Not in a "humans are the worst so shun society"-type way, but in an "if you live with someone they are, at some point, going to reveal things they do that drive you nuts"-type way.  Of course, some people will annoy you more than others, because personalities exist, but ultimately, everyone is going to drive you nuts from time to time.  And you're going to drive everyone else nuts from time to time as well, because you're no fluffy cloud of perfection, thankyouverymuch.

What does it matter?  If you live with roommates, it matters so that you can get over yourself.  If you don't live with roommates, I think this lesson best applies to living with people who are romantic-type partners.  People often speak of "testing out" living with their partners, and generally they seem to be referencing the value of learning a person's annoying habits before they commit to living with them for the rest of their lives.  I'm not poo-pooing living with someone before you marry them, but I am poo-pooing all over this reason because you will never find a person who doesn't have annoying habits and they will all make you want to claw, drill, or gouge various body parts from time to time.  Or all the time.  In my completely inexperienced opinion, if a person's annoying habits are going to stop you from living with them, then you likely either a) don't love them all that much to begin with or b) will not be able to live with any romance partner, ever, because there is not a person on this earth who won't drive you nuts.

2) Everyone has things they hate doing.

This took me a while to figure out, but somewhere in the latter third of my roommate adventures, I realized that everyone has different things they hate doing when it comes to housework.  On the other side of that coin, everyone also has things they love doing (or at least, things they really care about maintaining, and so will voluntarily put effort into).

Example: I really care about the bathroom being clean, specifically the sink and countertop area, and will wipe it down almost daily.  I also generally maintain the dishes because piled dishes make it seem like the Wicked Witch of the West just sent her flying monkeys through the room.  Floors, however, I couldn't care less about.  I only ever really bothered cleaning floors when I knew people were coming over so they wouldn't think I was gross.  (Now I have a robot that cleans my floors.  WIN!)

What does it matter?  Well, if I have a roommate cares a lot about floors, but doesn't really notice the bathroom counters that much, then we could both wind up grumbling that we're "doing all the housework" and not realize that it's the glorious combination of our efforts that is maintaining things. This principle applies to any life situation where two or more people are responsible for a common good.

That's pretty much it - hearing real people have actual sex generally does not sound very sexy.  It can sound awkward, funny, or weird, but rarely does it actually sound sexy.  Know what's even less sexy?  Overhearing people discuss their sexual (mis)adventure right after the fact because for some reason they didn't close the door and you wandered unknowingly into the living room!

What does it matter?  It probably doesn't, but there is some relief in realizing that (apparently) nobody really sounds all that sexy when they have sex.  So you don't need to worry about it either.

It isn't sexy and it doesn't really matter.  Like I said, sometimes it's funny or awkward, and it might be a bit uncomfortable if, say, it was particularly odd-sounding and then they come out of the room and you're right there, staring stone-faced at the TV, but really, who cares?  As long as it's not so frequent and obscene that it interferes with regular daily activities, just let it be and move on with your life.

What does it matter?  It doesn't!

Most people don't want to be jerks.  So that means when other people are doing things that disrupt our lives, we try to live with it until the disruption becomes completely unbearable and we're seething with resentment like that scene in The Little Mermaid where Ursula starts huffing and puffing until she's turned the water inky black.

The problem with this?  Then something totally little and easy to adjust becomes a giant issue.  Plus, you've experienced a lot of anger.

The easiest example?  Noise.  Since, as I already suggested, most people aren't jerks, most people probably also don't realize that their noise is being disruptive.  So if you're trying to sleep and your roommate is watching a movie and giggling with friends, you have choices.  You can become Ursula and stew in your anger until your whole life is inky and black and you want to stab your roomie with a triton and possibly wind up exploding in angry screaming, or you can poke your head out the door and say "hey, sorry to be lame, but can you keep it down a bit?"

What does it matter?  Giving people the benefit of the doubt that they don't want to make you miserable and talking to them about things is a readily-transferrable skill that will result in reduced anger and increased harmony.  Communication, my friends, is key.

While it's good to communicate about the things roomies are doing that disrupt your life, let's remember that living with other people is a general life disruption.  It's actually sort of part of the point.  So you can't really force them to live exactly the way you do.  Most of the time, you just have to get over it.

If you can't get over it anymore and have started to be annoyed by things that happen when you live with any other human, like the fact that there is food in the fridge that isn't yours or shoes by the door that aren't yours or that you heard a person move around in the other room, then it's time to bite the bullet and get your own place.  And maybe examine why you are having these control issues (I know I did).

Why does it matter?  I guess it only matters if you want to be a part of society in any way.  If not, take to the hills and have a happy, un-disrupted life!
at February 12, 2015
Email ThisBlogThis!Share to TwitterShare to FacebookShare to Pinterest
Labels: thinking things