Not really timely, but still, a cool article on the truth about the "Halloween Sadism" urban legends: The Terrifying Truth About Razorblades in Apples.  (Spoiler: the "terrifying" truth is that no one has done it.) 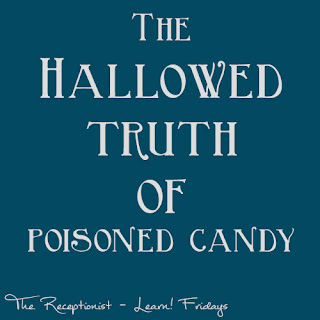 Out of all of history, the only time anyone has given away anything to trick-or-treaters at Halloween that was poisoned or tampered with was an old woman in the early sixties.  She gave rat poison and other such unfortunate substances to kids who she thought were too old to trick or treat, but (here's the kicker), she told them what she was giving them.  A terrible and mentally unstable thing to do for sure, but no trickery to speak of.

All other instances of poisoning on Halloween are terribly sad and targeted.  No strangers handing stuff out to kids at their door, just those horrific stories of adults giving poison to kids they know and care for.

The stories are all based on total fabrications, yet they continue to propagate to the point where kids today are being deprived of the awesome experience of getting free candy from their neighbours.  Why?  The article suggests that it's linked to the move from the rural to the urban - suddenly being crammed together with strangers and the fear and violence that comes out of that situation.
at November 22, 2013
Email ThisBlogThis!Share to TwitterShare to FacebookShare to Pinterest
Labels: *Learn! Fridays, Growth & Advice