break up survival: 9 ways to save your dear little heart 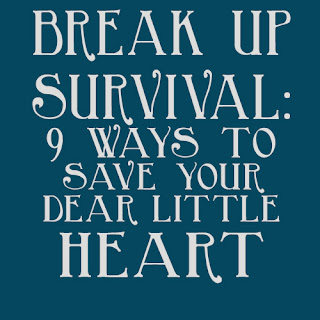 When you look at it objectively, there is something truly odd about the serial monogamy our society prefers: meet someone, slowly make them into the most important person in your life, share a level of intimacy that you share with no one else, and then cut it off and attempt to move on like it never happened until you find someone else to do it with.

Now, I'm not suggesting that we all jump on the polyamory train, nor really any other relationship model you can dip a hippie in. No matter what everyone who's read Sex at Dawn says, just because early societies may have been like that doesn't mean it will work today, nor is it the best way for humans to interact anymore. If you ask me, one person at a time is still the way to go, with the ultimate goal of finding one person to stick with until you die.

Of course, this means that you will occasionally (or frequently, depending on your patterns, although if that is your pattern you may want to get it "checked out" so to speak) either have to cut someone out or be cut out by them. And that's rough, pretty much always. From the sadness to the missing of this person who was (or was becoming) your best friend to the assumption that there will be no one else ever again, there are hurdles to jump. Now, every human person is different, but since I like to think about everything that happens in my life a couple (or a couple hundred) times over, I have some thoughts on what has helped me big time during these unfortunate break up times.


One: Remember that every break up is different.

Just like every relationship is different because it's with a different person, every break up is different. My few break ups (I was a late bloomer in the dating world so I don't have many) have ranged from really hard/sad-but-for-the-better to rug-ripped-out-heart-stomped-but-I-still-love-him-so-I'll-offer-it-up-again-and-again. What I learned the second and third times around was that I couldn't expect the experience to be the same as the last one. This was especially important the second time, because that was the walk-all-over-me-in-case-you'll-love-me-again break up, and I thought I would still get over it in the same way I had my first, which included a lot of major personal revelations and feelings of empowerment. Those expectations of healing and empowerment did not help the process when I was feeling anything but, not at all.

So lesson one is to allow your experience to be what it is and not to expect yourself to feel any certain way at any certain time.

I'm not saying that you need to go and delete this person from your online life, although I don't know what happened in your relationship, so maybe that would be a good idea. What I'm suggesting is that you hide the "ex" from your Facebook newsfeed so that you don't have to see their crafted social media-self all the time, and maybe unfollow them on Instagram and Twitter. Protect your idle social media moments, and at least make it so that you have to intentionally seek them out instead of having them just pop up in your life.

Oh, and try really really hard not to look them up. If they are even semi-regular users of social media it will look like they're off being awesome and it will make things harder. Staring at their profile pictures is not going to help anything.


Three: Talk about it.

I find that the more friends I tell about the break up, specifically the "why" and "how", the easier the whole thing becomes. The reasons and the events that lead up to the relationship ending hold less emotional power over me, and with each telling it becomes more of a story and less of a current emotional reality. Plus, friends are typically great for helping you feel good about your choice (if you did the breaking) or helping you see why you're better off without the so-and-so (or at least telling you that enough times that you might sort of start to think it might be true.)

I challenge you to be totally honest with at least a select number of trusted friends about how you're really feeling. Saying out loud that you're sure you'll die alone, that you pretty much don't want to get out of bed, that you can't imagine ever being happy again, or even that you're doing better than you expected, is truly beneficial. Again, by taking these thoughts and feelings out of the place you're hiding them in your heart and letting someone else see them, you take away some of their secret power over you. And then your friends will also be able to be truly helpful instead of stabbing around in the dark at random niceties.

Word of caution: you do want to avoid talking about it non-stop until your friends want to throttle you. Also, I suggest avoiding the ceremonial demonizing and vilifying of the ex. Sure, it might feel good in the moment, but unless they really were heinous, it's just not classy nor is it fair. Besides, you were dating them, so they must have some good qualities.

Reflection is an important part of a relationship ending, for sure. Knowing what happened to your heart, what happened to theirs, and learning from your pain are all good things. Not right away though. Right away things are way too raw and way too likely to turn into horrible downward spirals of darkness and the emotional equivalent of damp, grimy burlap. I like to use a mixture of binge-watching television, reading, listening to podcasts and talk radio, attacking new projects, reconnecting to my spiritual practices, exercising, and lots of socializing to keep my thoughts from going to those dark burlap places as much as possible.

I've already mentioned this in my last singalong post, but I am a big fan of using music strategically to help nudge your thoughts and feelings in the right direction. I know that wallowing is tempting, sometimes even necessary, and that hearing a song of heartbreak can make you feel like you're not alone. However, it can also pull you down in a major way and curl you up into a little black ball of death. This is an undesirable situation.

When I was going through the big time awful, heart-crushing break up, I made a playlist that I forced myself to listen to every day, sometimes more than once. It was full of songs that were upbeat, uplifting, and contained messages about being better off alone, having life after love, or that had always made me feel generally good. This was a hugely important part of my ability to go through each day, you can't even imagine.

Drink water. Sleep. Eat some vegetables. Move your body around. At least, try to do all these things in between the serotonin-laced ice cream and feeling-dulling wine. There are physiological components to grief and when your body is trying to battle grief you make it way harder by putting a bunch alcohol and no-sleep in the way.

This relates to occupying your mind a bit, but what makes you feel like a complete and accomplished person more than doing something new?

There is magical healing power in being outside (in actual, un-manicured nature, if possible), holding babies, and playing with animals. Really.

Nine: Be honest with yourself.