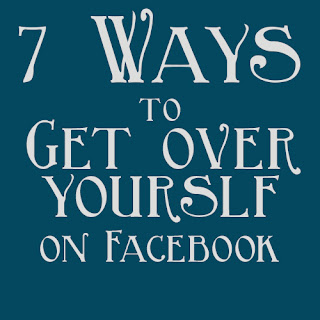 I posted it to my Facebook wall (oh sorry, timeline, because it really changes it to rename it) with this commentary:


Questions raised by this article: why is a relationship status update more valid to share than a major job promotion?  Is seeing someone else's heartfelt happiness really going to make you hate your own life?  Is advertising that you need a subletter while travelling a brag or an efficient way of finding a trustworthy person to live in your home?  What if I'm publicly pointing out my friends' awesomeness in order to shine a spotlight on someone else whom everyone should appreciate?

Finally, how unhappy must this writer be with his own life to interpret all these benign sharings so negatively?

Afterwards in conversation with a friend I was informed that I really "tore a strip off" that article.   I honestly didn't mean to, but I do find some serious flaws in his arguments, some of which I pointed out in that post.  And now I will use my platform here to dig deeper into those flaws and make myself sound as enlightened as possible in the process.

Before it all begins, I will point out that I agree with the fundamental principle of this post.  People should consider whether their update is of any value to its readers, and some of the things people post seem genuinely, stupefyingly, annoying.  However, writing a post with rules about what people can say on a website invented for people to be able to say whatever they want is also kind of annoying.  And writing a lengthy rebuttal is also kind of annoying.  So we're all annoying!  Hooray!


Image crafting isn't a new thing.  Everything that we do that is both in public and on purpose is image crafting.  How we dress, when we decide we want to use a particular phrase or word more often, books we read on the bus because we want people to see us reading them, books we place with prominence on our bookshelves, the pictures we select to put on our walls, that trendy new bar we visit after work instead of the local one with all the same drinks and cheaper prices, or the point we make of mentioning that our lunch is organic and cruelty-free homemade from scratch with no additives.

The difference between all of our regular image crafting and the internet is that the internet (especially Facebook) is a super-condensed image crafting machine.  It's the place you go the the express purpose of seeing what image your friends, relatives, acquaintances, and exes want the world to see about their lives.  It's also a place to easily send messages, create events, and share ideas, but in some ways that's secondary.  Facebook is the place where you choose what other people will see about you.  That is simply what it is, so no point in getting all up in arms when people do it.


The constant complaint Tim (Mr. Wait but Why) makes is that most peoples' updates are of interest to only a small number of close friends or family, not their "800" Facebook friends.  Sure, that's probably true, but, for better or worst, most people don't think of Facebook as the way they communicate with those alleged 800 people.  When people write Facebook posts they are mostly thinking of their friends and family, and maybe a close outer circle of acquaintances, despite the actual larger audience.

Once again, yes, it would be great if people took into account the fact that their status will be read by a lot more people than just their closest friends (or even that it will be read by anyone at all).  But really, if reading life updates from acquaintances really bothers you, then pair down your friends list to your actual friends and save yourself from the posts of the riffraff.  A lot of people do that.

I personally like having a Facebook network that's a little more sizeable, not because I want it to look like I have a zillion friends but because it's useful.   I can ask advice or help of a wide network of people on anything from carpooling to computer issues.  It's a hive mind.  And, of course, I can be of service to that same network if they need help or advice.  I think it's great!  Plus, I kind of like looking at the wedding and baby pictures of my outer circle.  If you don't see it that way, then that's on you, they're your "friends".

Issue #3: The Specifics - Relationships vs. Everything Else

This is a part of the point I was trying to make in my Facebook post. Some of the specific things Tim isolates as "acceptable" or "unacceptable" I find befuddling.  The main one being the strange relationship-centric nature of his rulings: apparently, it's okay to update your relationship status when you start dating someone but not to share that you have a major promotion?

First of all, it's a little funny because most people I know have removed relationship status from their profile all together unless they're in a lifelong companionship.  Once you have to break up with someone and announce it to the world by changing your relationship status back to "single" on Facebook, it kind of sours the joys of advertising your brand-new relationship with the world.

As someone who has spend the vast majority of her life as a singleton, I also just find it a little unfair.  Finding someone to date is something any human being has a limited amount of control over - you really don't know when or how you're going to meet your next "siggy other."  Career, on the other hand, you do have some amount of control over.  Plus, career achievements are really worthwhile.  And at the very least, they are no more braggy than relationship updates.  So for Pete's sake, don't take the work-status update away from the singletons just because you're grumpy today!

Issue #4: The Specifics - The "Acceptance Speech" and other Gratitude

Personally, I think one way to use Facebook status updates for good is sharing positivity and gratitude.   Of all the things you can post about, why not share your thankfulness or shine the spotlight on someone else who deserves a little public affection?  If you are one of the "800" friends who don't know the person I'm posting about, then just ignore it.   Or (if you're like me) read it and feel some reflected joy at the shared positivity.  Because saying nice things makes (most) people (who are able to have some perspective about life) feel nice.

Sure, maybe there's a bit of a backdoor brag imbedded in the post - "look at me, I have friends who do nice things for me!"  But really, who cares?  Tim says that this kind of post is a cry for attention and a desire not to share love but to feel loved, I say, sure maybe, if you want to look at the world while wearing your Cynic Pants.  But I doubt it.  If I was trying to get everyone to gush with love for me, I wouldn't do it by pointing their attention at someone else.  That's just inefficient.


Interesting, informative, and funny posts are supposed to be okay, but if we're getting down to brass tacks here (or maybe, just for fun, some platinum tacks), when I post an interesting article on Facebook, or a funny comic, or anything else, I am being just as image craft-y, attention-grabby, narcissistic, jealousy inducing, and maybe even lonely as when I post about my bad transit experience.

The only thing that sets "Look at this cool, interesting, intellectual article I read, don't you know that I must also be smarter and better informed than you" apart from "Waaah, I'm having a excrement-filled day", is that you may or may not find that article interesting and get to post a comment on it that shows off how you are even smarter and better informed than me to both of our 800 friends.  Way to go!

Sharing anything, online or in real life, can essentially be named as a narcissistic plea for attention, if you want to see it that way.   Human beings have a need to share our experiences and thoughts and prickly little feelings.   The internet has provided a thoroughly unprecedented platform to do this on a large scale.

If you want to look at humanity as positively as possible, you can see this as a simple fulfillment of our basic need to share that has turned a little annoying by giving it a Super Megaphone with Magical Never-Die Batteries that Hangs Out in Your Home and Wherever You Go if You Have a Smart Phone.

If, on the other hand, you want to keep wearing your cynic pants, then go ahead, call it narcissism and attention-seeking or jealousy-inducing, or any other smart-sounding name for "Look at me!  My life is great, especially compared to yours!"

On Facebook, as with everywhere in life, some people are just following through on their basic human desire to share their thoughts, feelings, and lives while others are consciously or unconsciously trying to make people jealous or broadcast their narcissistic selves for the rest of us mortals to admire.  Heck, I'd bet you that everyone does both from time to time, and even that a lot of posts are take a little motivation from both piles.

Also, I think we often assume in others the motives we secretly have in our hearts.  So maybe the pot is seeing itself reflected in the kettle?  Hmmmm?

You are not a victim.  If the noise on Facebook bugs you, turn it off.  Leave Facebook if you want to, pair down your friend list to people you actually like and care about, or just block the annoying ones from your newsfeed.  People are people and Facebook allows people to be people in a super public way.  If you can't handle it, leave.  I'm not saying this in a mean way - it's a legitimate and empowering option,

There's an old saying parents love to use on their children that someone else can't be annoying, you choose to be annoyed by them.

It's hard sometimes to see only the best in everyone else's lives while you're living with (what appears to be) the poo-stain of your own.  It's like how we all know we're not supposed to let magazine pictures bug us because they're all fake and airbrushed, but they still make us feel like our bodies are wriggling, discoloured sacks of sadness from time to time.  (Or is that just me?)

Yes, sometimes people are guilty of doing things that tend to be annoying, and people should be aware of their actions and how they might be perceived.  But you don't have any control over that.  You chose to join the website that lets people be themselves (or some version of themselves) in front of you at all times.  You can then choose to change how you perceive what they're doing, either through a good ol' fashioned attitude adjustment, or an actual adjustment of your Facebook settings.

You've got the power!


Credit where credit is due: some of this came out of ongoing conversations with my office mate and top-notch friend Alison, who says "get over yourself" all the time and said the thing about other people not being annoying but us choosing to be annoyed by them.
at October 27, 2013
Email ThisBlogThis!Share to TwitterShare to FacebookShare to Pinterest
Labels: this really gets my goat