Learning! Can astrology predict your health? 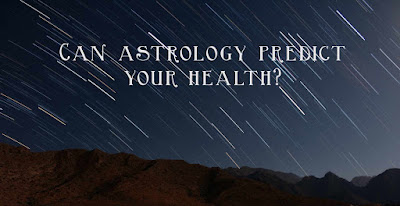 I've often wondered about astrology.  Not whether the stars being in certain positions in the skies have any impact on our lives, but whether being born at certain times of year does.

Could, for example, being born in the summer versus the winter make any difference on your disposition?  Sure, family environment and genetics play a significant role.  But what about the rest of your external environment?

During that first year of life, when we process and learn so much about the world, does it have an impact if you learn to walk in a warm, grassy park or in your heated kitchen?  If you have to be bundled up before you go outside as a newborn or if that doesn't start happening until you're 7 months along?  If your first experiences are the lazy days of summer or the hectic Christmas rush?

When people get a proper astrological reading done, they often remark at how uncannily (even creepily) accurate it is.  Sure, there's confirmation bias at play, but could it also be that when the astrological signs were being determined, they were actually mapping overall differences that come from simply being born in different times of the year?  A simple correlation between being born in a certain physical and social climate and disposition?

I certainly don't know the answer, but what I do know (because I just read it) is that researchers have found a relationship between birth month and health.  This was done through the development of an algorithm that compared 1.7 million New York patients' medical records from 1985 to 2013 against their birthdates.

The result?  You are more likely to get heart disease if you were born in March and ADHD if you were a November baby, among other things.

Fret not, if you are planning children - you don't need to start timing your procreation for birth month as well as ovulation.  While these relationships are statistically significant, the chances of all these illnesses are still pretty low.