Pedals and Feet and Engines, Oh My! (5 Steps to Harmony on the Road) 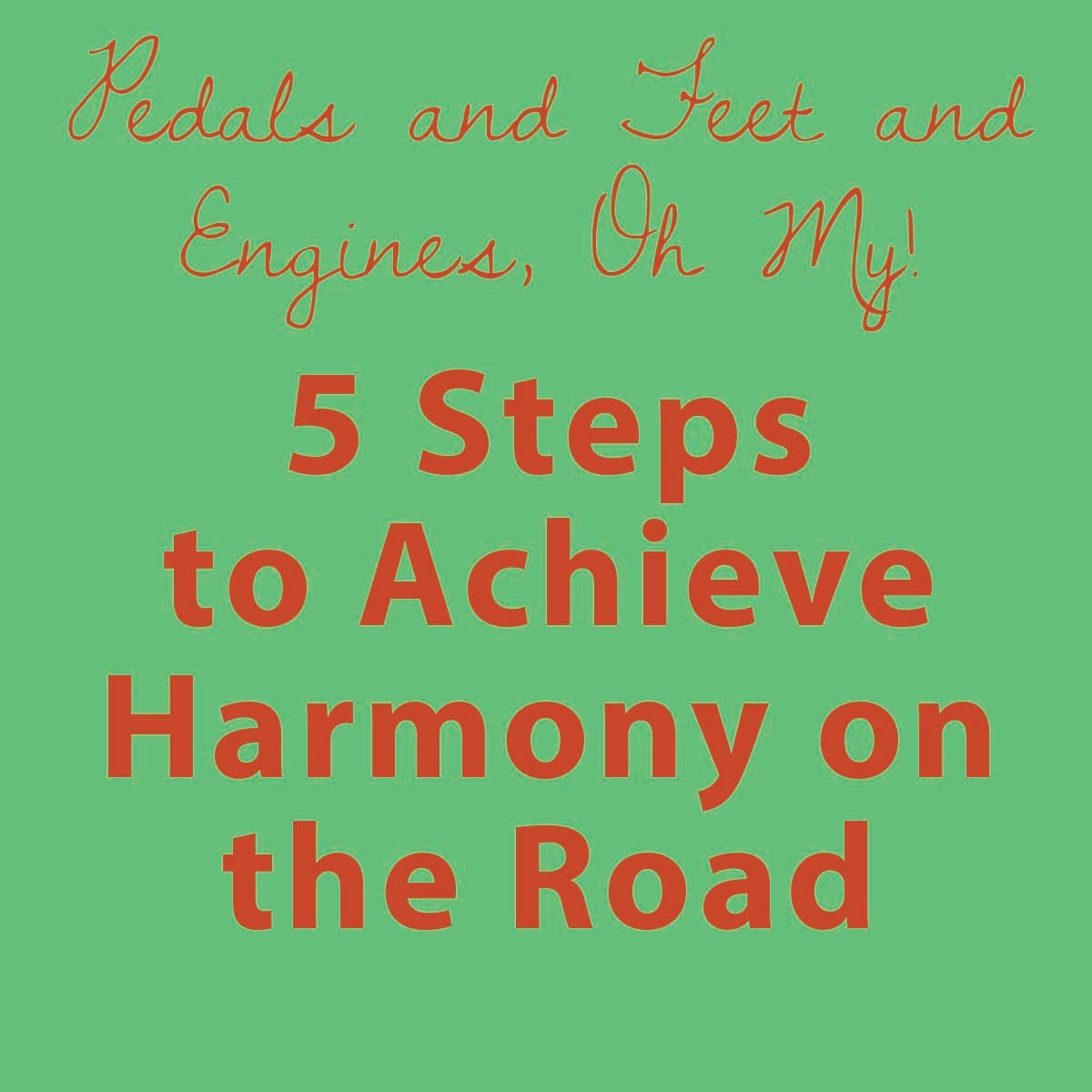 My name is Andrea, and I ride my bike.  I also have, at a different point, traversed through life behind the wheel of a car.  At another point I was all about feet and transit to get around.  I have even ridden in planes and on the backs of horses!  I have conquered transportation!

Because I am such a Renaissance Woman of Getting Places, I am here to solve the eternal issue on modern city roads: the battle of resentment between drivers, pedestrians, and cyclists.  I think we can all just get along!

Either that or you are being entitled or perceive the other person to be entitled because they got in your way or didn't follow a rule.

So... you're a human who needs to get somewhere, are you?


1) Remember! You are not the only person trying to get somewhere for a reason.

When I got annoyed at drivers being speedy jerks as a teenager, my mom would often suggest that maybe it was someone whose wife was in labour and they were rushing to the hospital.  If that were the case, I would be cheering them on as they hopped lanes and got there as quickly as possible.


2) Nobody wants to be involved in killing, but sometimes people make mistakes because of their humanness.

Just because someone cuts you off or takes your right of way or steps into the street or whatever doesn't mean they are a jerk or an idiot or trying to kill you or trying to get killed.  They probably just weren't paying proper attention in that moment because they were distracted by a bird or remembering to pick up their grandma from the hospital or wondering if they locked their door or worrying about their friend or stressing about their demanding job or remembering the last time they had sex.

I know you have no idea what that's like because you are always fully alert and aware of everything that is going on around you and never have a wayward thought enter your mind and distract you, but it would be great if you could have compassion on the rest of us mere mortals.

SUMMARY THUS FAR: If someone does something jerky it's probably because they either have something urgent going on and need to rush or because they got distracted which is something all humans do.  Don't fall prey to the fundamental attribution error!

Rules are more than just a way for The Man to oppress us.  They are also tools for harmony, safety, and reasonable traffic flow in an overpopulated city.

Of course, I am a believer in the spirit, rather than the letter, of the rules.  So yes, cyclists don't belong on sidewalks.  Except maybe if you are going to a coffee shop halfway down the block and there aren't any pedestrians and it's not very safe to just stop on the street right in front of the coffee shop and lift your bike onto the sidewalk because there's no cutaway there.  Pedestrians should only cross at crosswalks.  Unless there are zero cars around, then it's just silly.  Drivers should always stop at stop signs.  Unless you slow down considerably and you have really good visibility and can see that there are no cars or bikes or people around.

BUT!  An important rule to always follow is keeping your right of way when you have it!  Drivers, I'm looking at you.  I know you're trying to be nice when you stop in the middle of the street to let a pedestrian or cyclist pass, but you are just throwing the whole system into disarray.  We'll wait.  Thanks.

Not in the sense that there is anything sexy at all about safety gear, but that being alive is FAR MORE SEXY than being dead.

Cyclists!  Get those flashy lights, reflectors, helmets, and dingy bells!  They will help keep you alive, I promise.  Pedestrians!  Your main safety mechanisms are to wear clothes of some kind (not a great defence) and to stay on the sidewalk.  I know walking in the middle of the road in the middle of the night wearing dark clothing sounds fun and carefree, but it means that I almost hit you with my bike last night.

Drivers!  You may think that wearing a seatbelt affects only you, but what if your body shoots out the windshield and lands on a nearby pedestrian, hmmmm?  Do you really want that involuntary manslaughter on your record when you reach the pearly gates?

This is the final answer that will save us all!  I fully believe that most of our problems on the road can be solved by predictability.  If I can predict what you're going to do, then I can go where I need to go without anyone getting hurt, and vice versa!

So far my mind reading abilities are very limited, and so until they get better, I can only guess what you are going to do from what you are currently doing.  I assume you will continue at the same basic trajectory until I have a clear indication you will not.

Keep doing whatever you're doing and use whatever signalling devices are at your disposal to let people know if that is going to change.  COMMUNICATION IS KEY - in relationships and on the roads/sidewalks.

Now enjoy the rest of these gifs I found of a 1963 bike safety video:


at March 24, 2015
Email ThisBlogThis!Share to TwitterShare to FacebookShare to Pinterest
Labels: Growth & Advice, you're welcome