Learning! The 10 most controversial psychology experiments ever published 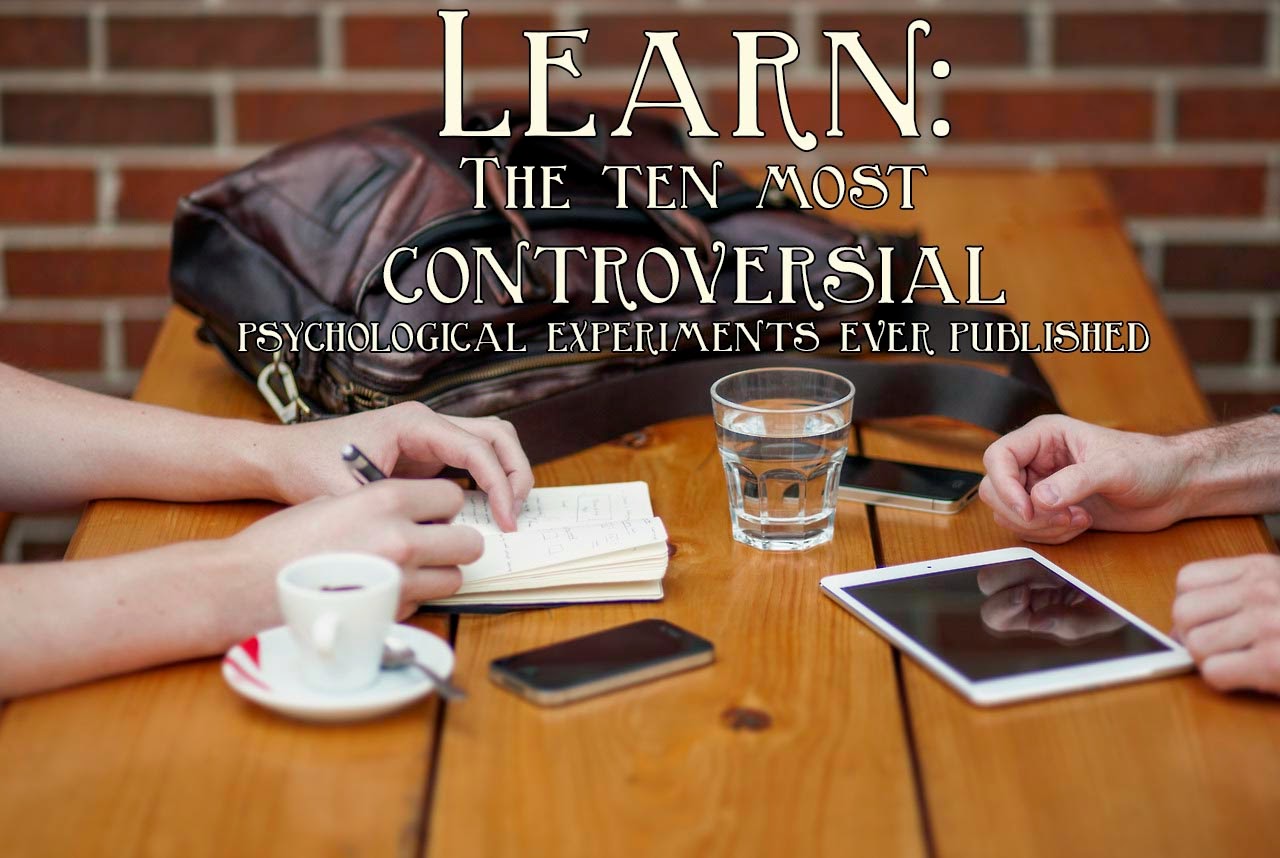 Psychological experiments are fraught with ethical concerns, because they generally always rely on messing with peoples' heads, and that can be a fragile thing to do.  Of course, we figured that out over time, after a few not-so-kind experiments were performed and ethical guidelines ramped up exponentially.  These days, you have to get rounds of approval just to lie about the reason for your study to your participants - something that frequently needs to happen to keep people from tipping off the experiment by trying too hard one way or another.

I, of course, am thoroughly fascinated by these less-than-ethical experiments.  I know what they did is terrible, but we also garnered information we never would have otherwise known!  The conclusions are kind of thrilling.  (She says, revealing herself to be one of the biggest nerds of all time.)

Now, drumroll please, check out BPS Research Digest's compilation of the top 10 most controversial psychology experiments ever published!  Check their blog for their full analysis, my commentary is below.  Some of these I hadn't studied in school, which is even more exciting!

This one has gone down in history as one of the most revealing and unethical experiments of all time, and gets recanted in almost every psychology class you'll take in an undergrad.  The experiment itself involved taking a group of college boys, randomly assigning them roles as prisoners or guards, and then locking them up in a dormitory overnight to see what would happen.  Well, turns out the guards quickly became totalitarian overlords, doling out punishments at whims, and the prisoners quickly became reserved, frightened, and either defiant or subservient.  The experiment was cut off early because of the behaviour of the participants.

The researcher (Zimbardo) interpreted this to say that "good people" will quickly and easily go bad, given the right role and circumstance.  This has, in true scientific nature, been refuted, but not entirely.

Another one that shows good people gone bad, with barely a nudge from authority.  Here participants gave shocks that they thought were extremely painful, or possibly deadly, to another participant, with only the gentle encouragement of the researcher to urge them on.  Interestingly here, many of the participants who went all the way with the shocks did so at great personal distress, and others refused to participate at all, unfettered by the researcher's encouragements.

3) The use of elderly words to provoke slow walking.

One of many in a series of studies intended to show how dang suggestible we are, and how many little biases and preconceptions we have about types of people, this one fed people words that had to do with being elderly and observed them walking more slowly out of the lab than those who did not hear the primer words.

The controversy here?  Not making people walk slower but the fact that this has not yet been replicated, and that the original researcher got mighty angry when it happened.  Of course, if it happened once it didn't happen at all, as far as science is concerned, so this point is basically invisible.

This poor kid!  A toddler was conditioned to be afraid of white mice by being subjected to a loud, scary noise every time he saw one.  They were, of course, trying to prove that conditioning is possible based on external, unrelated factors, and boy, were they right.  Little Albert's fear extended not only to white mice, but anything white and fuzzy.  His mother rescued him from the experiment a tad too late, and refused to bring him back, so no one really knows if this crippled him for the rest of his life.

This was one of my favourites in university, because it showed how dang malleable our memories are.  An adult who, according to their parents, was never lost in the mall as a child, is then told the story of their frightening "lost" experience.  It's corroborated by a trusted source.  Suddenly, the person not only agrees that they did, indeed, experience that, but they add on to the story, reporting details that are completely made up.

This was intended to refute the sudden rash of "recovered memories" of sexual and physical abuse that were coming from hypnosis sessions and other less-than-ethical counsellors.  Because unhappy people with relationship issues who are in therapy and undergo hypnosis to figure out the root of their problem will not only believe the subtle suggestions that they were abused, but invent the memory.  How terrible is that?  Now their family is torn apart by a false memory of something that never happened.

Ooohh!  This one is new to me!  In 2010, Darryl Bem did a study that showed people performed better at memory tests for words that they would study in the future, something he claimed showed some kind of pre-cognition.  This is enough to turn psychology on its head as it is, and while he made his methods readily available, no one was able to replicate and the journal that published his study refused to publish any other attempts, resulting in a big "replication crisis" in psychology.

Meh, this one is kind of dull, to be honest.  (My opinion, of course!)  Someone published a study saying that different parts of the brain link directly to different emotions, but their methods were shoddy.  The term "voodoo" was used to refer to "non-existent."

The placebo effect is one of my favourite psychological phenomena.  Here, researched Kirsch did a meta-analysis of all published and unpublished research submitted to the FDA about antidepressants and found that people with mild-to-moderate depression fared no better than placebo.  This, of course, lead to dramatic headlines and a re-analysis of the data showing just the opposite, and another re-analysis of the data showing the same result but interpreting it differently.

Man, people get up in arms about results they don't like.  Here, Judith Harris found that kids are more shaped by their peer groups than their parents.  She describes it as concisely as is possible: "identical twins reared by different parents are (on average) as similar in personality as those reared by the same parents ... adoptive siblings reared by the same parents are as dissimilar as those reared by different parents ... [and] ... children reared by immigrant parents have the personality characteristics of the country they were reared in, rather than those of their parents' native land."

Libet's study used EEG readings of brain-wave patterns to discern that brain activity for an action begins before you have consciously decided to do it, leading him to assume there is no free will. Mostly the debate here is as to whether the conclusion is overstated or not. Do we have to be aware of our conscious decision to have made it? Philosophers, go nuts.
at January 30, 2015
Email ThisBlogThis!Share to TwitterShare to FacebookShare to Pinterest
Labels: *Learn! Fridays, Growth & Advice, psychology