Book Club: The Skin We're In by Desmond Cole is a MUST! 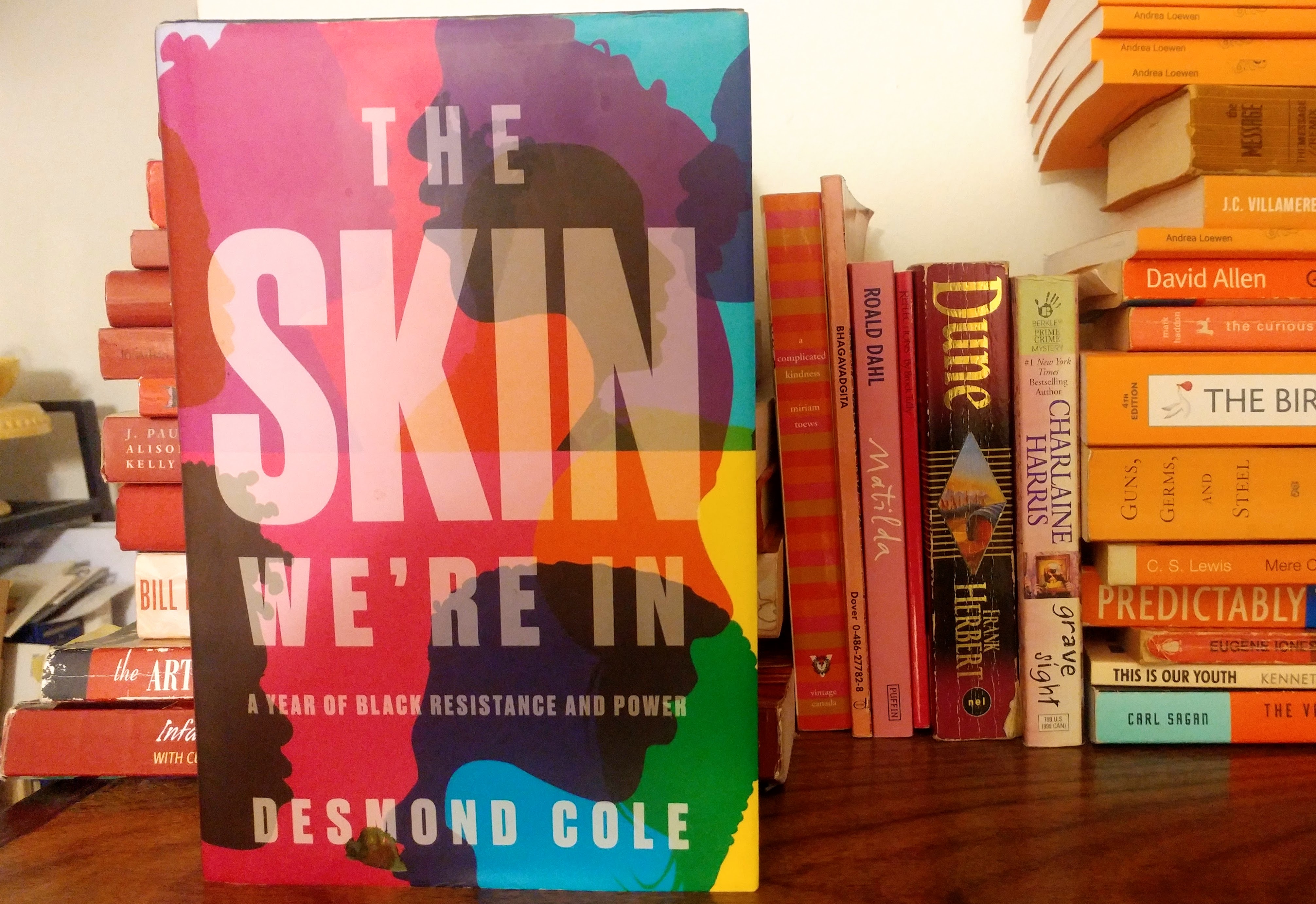 First of all, can we just take a moment to admire the gorgeous cover to this book? It's eye-catching, the colours are stunning, and the closer you look, the more you see in it.
The Skin We're In: A Year of Black Resistance in Power is a non-fiction book by Desmond Cole that details racism and activism in Canada. Structured around the events of the year 2017, each chapter represents one month and tells the story of a major issue or event that happened that month, from the police beating of a Black gallery owner on New Year's Eve to the battle to get police officers out of Toronto schools.
The content may be tough, but in many ways, it is easy to read because Desmond Cole's writing is fantastic. He is smart, incisive, and knows how to tell a story that is information-heavy, yet captivating. He paints a stunning picture without bogging the narrative in descriptions.
For me, The Skin We're In took issues I have been vaguely uneasy about, such as Canada's immigration and deportation practices, or areas where I was sure Canada had racism problems but didn't really know the extent of it (like policing), and gave a wallop of information about their racist past, present, and (unless we change something) future.
Since Canada is so inundated with American news and culture, it's easy with issues like this to know more about the American problem than the Canadian one. This is the antidote.
It also provides a little glimpse into what it's like for him to live as a Black man in Canada. There are just enough drops of his own personal experience to see the toll it all takes on the simplest life experiences.
For example, the chapter "deep breath (may)." It is a little bit of respite near the middle where he describes his love for spring flowers and a joyful day in a botanical garden. Right in the middle, however, he and his friend encounter a sign: "This area patrolled by police." It gets just enough attention to know that it's a sore spot in the middle of a beautiful day. He makes it clear that he can't have a simple day of freedom and beauty, unmarred by threats of violence.
Some quotes:

“This idea that Canada's racial injustices are not as bad as they could be, this notion of Slavery Lite, of Racism Lite, of what my friend calls the "toy version of racism" is a very Canadian way of saying: remember what we could do to you if we wanted to. Passive-aggressive racism is central to Canada's national mythology and identity.”

"If we can't imagine a different outcome than the police's violence, that's on use. We have to imagine something less violent, less reactive and reckless. Daring to imagine kindness and fairness for Abdirahman [a man beaten to death by multiple officers while he lay on the ground] is a true revolutionary act in a country that offers no alternatives."

"Canadians who do recognize historical injustice seem to understand it in this way:
- Bad things happened.
- Bad things stopped happening and equality was achieved.
- The low social and political status held by Indigenous peoples is now wholly based on the choice to be corrupt, lazy, inefficient, and unsuited to the modern world."

"Canada says 'look how far we've come' without defining who 'we' is, how we've arrived where we are, and from where we came, and in what condition we've arrived."

I HIGHLY RECOMMEND this book! I also recommend you read it more slowly than I did. Do one chapter at a time, and let it sink in. I read straight through and now feel a strong need to go back, re-read, and absorb the information a little more deeply.
The Receptionist Delivers!
Sign up for my email newsletter for a bi-weekly digest and bonus content!
at August 10, 2020
Email ThisBlogThis!Share to TwitterShare to FacebookShare to Pinterest
Labels: (Pop) Culture, Art & Inspiration, bookish