#yesallwomen... Now What? (Or, 4 Things You Can Do To Make the World a Safer Place for Women) 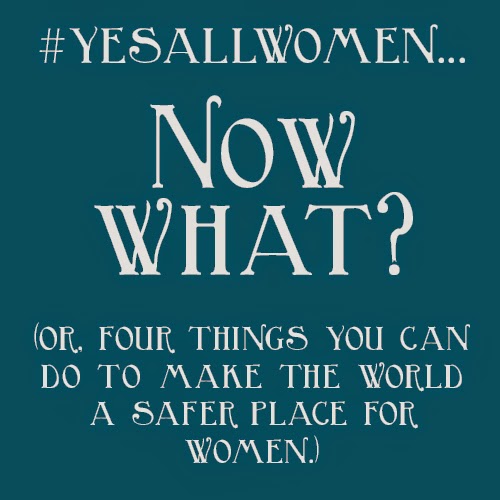 By now I'm pretty sure everyone on the internet knows about the #YesAllWomen movement?  If you haven't, it's basically the best use of hashtag out there.  Women sharing their stories of harassment, assault, fear, and objectification, making the point that every woman faces these things in her life, and that maybe we should see this as a problem.  (If you don't know and want to know more, check out the hashtag, this Guardian article, the super-cool Felicia Day's post, this image that's been tweeted around, and these two excellent responses by men.)

I was planning on adding my own stories to the mix, trying to decide which story to choose ("do I go for the worst one or the one that happens most often?"), but have been thinking a lot about the "next step" of this movement.  Yes, women sharing their stories is a great and important thing, but how do we take a step towards change and keep this from the usual "hashtag activism" pitfall?

So here's what I'm going to share: some advice to the dudes out there who, instead of getting defensive or angry back at us for sharing the our experiences, want to be a part of the solution.  Because we have spent a lot of time teaching women self defence and very little teaching men about what they can do.

I imagine that some of men out there are reading the stories and being rather upset to learn what has been happening all around you, and maybe even more upset to realize that you may have unintentionally been the cause of some stories yourself.  Well, here are some things you can do from now on to help the women around you both BE and FEEL safer.  Yes, it means that you might sometimes go out of your way, put your neck on the line, or not do something that you want to do, but it means you'll be making the world a better, safer place.

I'm sure most of you would stop outright physical assault if you saw it.  However, I also know from experience (my own and my friends') that many of you would not step in until it got to that point.  If you are, say, on a bus or at a party and witness guys making lewd, objectifying comments about a girl who is clearly not into it, know that these comments are not trivial or flattering.  They are often scary, hurtful, and dehumanizing -- especially if we are in a situation where we can't get away from it.

All you have to do is say a few words: a simple "back off", "leave her alone", or "that's not cool" will make the point.

Doing this achieves two things: one, it relieves the girl of the harassment and lets her know she has an ally.  Two, it helps teach the guy that this kind of thing is not okay.  We all know that me saying "leave me alone" -- if I feel safe enough to do so -- isn't going to teach the jerks of the world what they're doing wrong, but hearing it from another guy might make a dent.

And hey, when you're hanging out with just a bunch of guys and they start this kind of talk, you're sure doing everyone a favour if you say something there, too.

If you're walking down the street at night, alone or with a group, and there is a woman walking by herself coming towards you, chances are good that she is mentally calculating the likelihood that you might assault her and what she will do if that happens.  While you can't control that response, there is one thing you can do: you can cross to the other side of the street so she knows that she's safe.

Yes, it puts you out of your way and it's technically unnecessary if you know you aren't going to do anything, but if you want to help her feel safe until we live in a world where women aren't instructed to be afraid of walking alone at night, it is an easy step to take.

I understand that this isn't a perfect solution to street violence or the perception of danger, but it is a relatively easy stop-gap measure until we women stop having to hold our keys like a weapon.

Also, if you try to interact with a woman walking by herself at night for any reason, know that if she stonewalls you, she might not be a bitch.  She might just have been cornered or followed by the last guy she responded to and is trying to protect herself.

Okay, now let's talk compliments for a second.  I can imagine that all this talk makes it seem like you can never safely flirt with or compliment a girl again.  Well, it's good that you're aware of the potential impact of your words, but also true that not every comment is a scary, terrible thing.

There are extremes: compare the guy who said "great hair flip" when I took off my bike helmet outside the grocery store (and then kept walking after we shared a laugh) and the guy who shouted "I'll have you for dinner and you for dessert" to my friend and I as we walked down the street.

Okay, so it's easy to spot the extremes, but where is the line?  I don't know if I can say precisely where things morph from a nice exchange to harassment, but here are some considerations:

Just remember, there are a lot of ways to get a conversation going or compliment someone without making it physical.  If you're just wanting to say something nice, then take the extra seconds to think of something that doesn't have to do with her body.  And really do consider the time and place, even if your intentions are the best.  Just because you want to say something doesn't mean it needs to be heard.

Here's one of my biggest beefs: escalating physical contact from a guy I don't really know.  It happens on a date, at a party, or anywhere, really.

It's an old technique: first you touch the arm, then the shoulder, then the back, then the leg, then if there hasn't been a barrier yet, maybe go in for a kiss, and so on, getting closer and closer until the girl puts on the brakes. (But hopefully not, because then you have tricked us into letting you close enough to maybe have sex!)

I hope it's obvious what a terrible position this puts us in.  What you are really doing is testing how uncomfortable we have to be before we'll say something (or, more likely, find an excuse to get away and then try to avoid you after that).  Best case scenario, what?  You're hoping that even though we wouldn't have wanted to sleep with you normally, we'll go for it because we've lost our sense of personal space?

I feel like this needs special mention for the club scene.  Just because there is loud music, alcohol, and dancing involved doesn't mean you can start getting all handsy without consent.

I do understand, however, that nobody asks "is it okay if I put my hand on your back?" when talking to someone they're interested in.  That would probably make it seem even creepier.  Remember, instead, that constant touching is not the only way to show your interest, nor is it necessarily the best way.  Good conversation, some laughs, and -- here's an idea -- saying something about how you like her, will communicate the exact same thing.

At the very least, pay close attention to whether she's reciprocating/leaning in/actually into it, or just allowing it to happen until she is able to get away.

This is, of course, a part of the whole "woman as sexual gatekeeper" thing, which could take up a whole series of posts, and just sucks in general for everyone involved.


So there you go, guys.  A few things you can do to help make the world a safer place for us females.

I'm sure that people will disagree on some of these points being necessary - let me be clear.  I am not saying that you HAVE to do any of this or that you CAN'T do whatever you want.  You don't HAVE to do anything.  If you are concerned about the frequency of harassment and fear in a woman's life, however, these are my suggestions for how you could help.

Please add any other suggestions I may have missed!
at June 02, 2014
Email ThisBlogThis!Share to TwitterShare to FacebookShare to Pinterest
Labels: happy feminism, Issues & Ideas, thinking things, What's Right is Right