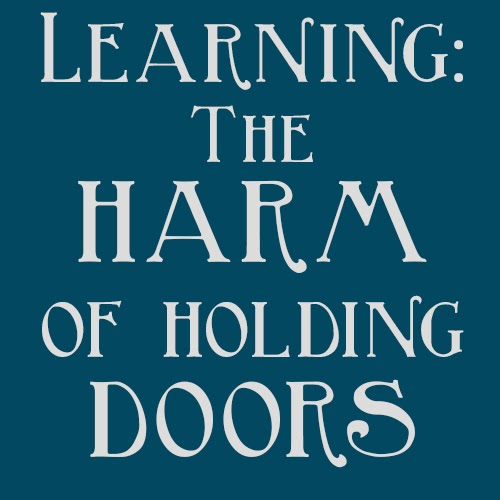 I have oft been in the "open the door for whoever I'm walking with if I get to the door first" camp.  I figure it's just a nice thing to do for whoever is around, whether they are a man or a woman.  I also think it's nice if someone else opens the door for me, although a bit odd if they maneuver their way into position to be able to do it when I was closer to the door originally.

In fact, I wrote about holding open doors for others a while back in my post about being a lady, advocating just this fact.

Well, according to science, I may be hurting the self-esteem and self-belief of men when I open doors for them.  Oops?

The study was simple - a research confederate would hang out near the entrance to a building and either open the doors for people coming through (men and women), or simply walk in beside them.  Then another confederate would ask the people to participate in a quick survey and ask them questions about their feelings of self-worth and efficacy.  It is important to note that the door was held open in a "chivalrous" manner, where the person holds open a door and steps aside so the other can walk through first, as opposed to just propping the door open behind you as you walk through so it doesn't slam in the other person's face.


There are some issues with the study, of course.  In this study, the doors were held by men and the survey was done by women.  Perhaps the issue was same-sex door-holding and women would show the same effect if a woman held the door for them?  Or perhaps it's not generic same-sex issue but male competition?  Who knows!

Still, something to learn.