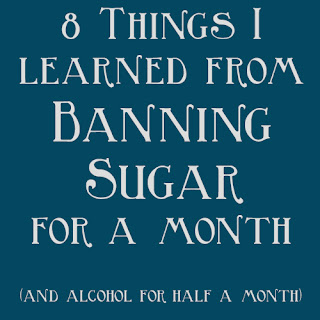 I've never been a person for any kind of diet-related discipline.  I operate on two principles: eat when I'm hungry/stop when I'm full, and eat whatever I feel like, with an emphasis on vegetables.

This month, however, I decided to give myself a challenge I'd wanted to try for quite some time - No Fun November.  This originally took the form of shunning all alcohol and refined sugar for the month.  Then I went through a break up halfway through the month and something had to give.  Since my main comfort foods are popcorn, chips, and cheese, keeping sugar off the table seemed far more manageable than turning down the sympathy beers from my friends.  Then it became just a No (Refined) Sugar November.


I say No (Refined) Sugar November because I did keep eating things where sugars naturally appear, I just avoided added, refined sugars.  Technically sugar is sugar, and while refined sugar is worse because of all the processes it goes through mutating it into super-crazy-sugar, it turns out our bodies actually process all sugars, natural or otherwise, in the same way, and that way is not great.  Still, baby steps.  Let's start with the refined stuff and see how that goes.

Why November, you ask?  Well, October has Halloween and Thanksgiving (for Canadians like me), and December has Christmas and all its festivities.  November is a little island in the middle just crying out for a detox.

The first weekend of the month included two birthday parties, a ladies' brunch, and a pub dinner. This was the true test: could I survive these sugar and alcohol-full activities and avoid misery?  Turns out the answer is a huge yes.  I joyfully drank soda water and diet coke at the parties.  I had tea at brunch.  I had water at dinner.  I simply didn't eat the sugary things.  And I felt great!

It is kind of sad, but I had forgotten how great it feels to go out with friends to a party, have a wild and wonderful time, and then go home with a completely clear head.  I'm not saying I'm used to getting smashed all the time, but even a few drinks can make things a little cloudy that night or the next morning (hey, I'm not 20 anymore.)

Let's think about what that first weekend would have cost me if I was having sugar and alcohol.  I could have easily dropped $100, and would have spent at least an extra $40-50.  Parties aside, adding a pint or two of beer to a meal fattens up that bill quite a lot.  Same with adding dessert.

Even those spontaneously purchased chocolate bars or the bottle of wine in the fridge - those little bits add up over a weekend, week, and month.  For someone on a tight budget like me, cutting that option out definitely gave me a lot more wiggle room to play with.

3) If you want to avoid sugar, avoid anything pre-made.

Almost all pre-made, pre-packaged foods have sugar in them.  Even the stuff that's not even a little bit sweet like soup or pasta sauce.  It makes zero sense except that we've become addicted to sugar and/or use it as an easy filler ingredient.

A lot of fruits are, actually, but I especially noticed how sweet the apples were.  It was almost overwhelming at times!

Also, remember when people used to say "hella" and how annoying it was?  Yep, went there.

I can think of a couple of times I was sad to not have something sugary, but most of the time it was more situational: a beautiful cake was being cut and served in front of me or I was bored and wanted to bake something.  Towards the end of the month I did have some visions of biting into a cupcake, but what I was really imagining wasn't the sweet taste but the moist, fluffy texture of the cupcake.

In fact, I really don't miss having sugary things much at all.  So much so that it is December 1st and I have not yet gone out and eaten a bucket full of sugary goodness, despite the fact that I just remembered there is ice cream in my freezer.

6) How often I eat (and drink) without thinking.

Cutting something out of my diet had the benefit of forcing me to be aware of what I was putting in my mouth.  I realized how often I eat sweets just because they're there, or I drink because I'm with people who are drinking.

Our environment and social situations have a huge influence on our behaviour, and when we aren't paying attention we can very easily conform.  As someone who has been avidly non-conformist from the age 14-on, it grates me to think that I do this, but the proof is in the (sugar-free) pudding.  It's not a conscious desire to fit in, but the fact is that someone else ordering a drink makes me more likely to order a drink too, and someone else eating chocolate means I'll probably grab a bite as well.

In this case, the results of conformity aren't totally dire, but they do have a cost.  I already mentioned the fact that sweets and booze don't come free, but they also tend to come with a high calorie count, which is not ideal health-wise.

Could be because I'm an all-or-nothing type, but cutting out sweets (and drinks, for a while) wasn't nearly as hard for me as I thought it would be.  It even became kind of fun to scan ingredients labels and then shake my head at our crazy society the puts sugar in vegetable soup.

8) Moving forward from here is a mystery.

Speaking of that all-or-nothing personality, I'm a little lost on how to really carry this forward.  I'm sure my newfound mindfulness-in-eating will carry me for a while, but without the ban, we all know those sweets will wiggle their way back in.  At first it will be intentional treats here or there, but that's a snowball that keeps on growing.  Throw in Christmas and it won't be long before I'm absent-mindedly chucking office chocolates into my mouth and grabbing handfuls of baking.

Maybe I'm not giving myself enough credit, but I want to be realistic.

So how does a person keep the awareness of what they're eating and a sizeable portion of the discipline, without completely cutting the tempting foods out?  Should I just try the mindfulness thing and see where it goes?  Should I say that I can have sugar once a week?  Should I say no daytime sugar (cutting out the office snacks problem)?  Should I just forget about it and live a little?  So many options!
at December 01, 2013
Email ThisBlogThis!Share to TwitterShare to FacebookShare to Pinterest
Labels: healthiness, Help Yourself